Countryside You say you want a revolution…

You say you want a revolution…

A rather fanciful vision of the totally apocryphal Ned Ludd.

Edward Ludlam’s name didn’t do the decent thing and die with its owner in the summer of 1776. Instead it emerged rudely triumphant more than 30 years after Edward – or Ned – was laid to rest at St Mary’s Church in Anstey.

If the name rings a bell, it’s because Ned Ludd was once used as a signatory by smash-happy men and women across Leicestershire, Derbyshire and Nottinghamshire. Men and women who were out of work because new knitting and stocking machines had taken their jobs.

During five years of hardship and strife, many a wooden frame was chopped to bits. Who dunnit? Ned Ludd dunnit officer. Duh. 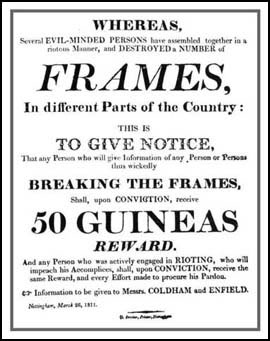 Dead Ned’s name was to plague those technology-savvy industrialists who had brought poverty to thousands of families across the East Midlands. Threatening letters were sent to factory owners signed Ned Ludd, General Ludd and King Ludd.

The Luddites, as they now called themselves, destroyed 200 new stocking frames in one three-week period in early 1811. In the East Midlands, the heart of the country’s textile industry, the fighting spread from Nottinghamshire and then to Leicestershire and Derbyshire.

Parliament, as it is wont to do, cruelly rounded on the starving and desperate, passing legislation which made damaging machines punishable by death. At this time, almost 90 per cent of the 20,000 stocking frames in use in the country were located in the region, with records showing almost 12,000 were in Leicestershire.

Lord Byron, quite possibly the sexiest person who ever lived, was one of the few MPs to speak in defence of the starving people in his native Midlands. Byron, FYI, was a Nottinghamshire lad. 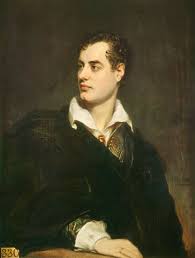 And factory owners, we know, had good cause to worry about their safety.

In 2006, underground passages and a chamber were found beneath a house in Loughborough that once belonged to lace magnate John Heathcote.

Heathcote had good reason to fear the Luddites – they had already destroyed a lace mill of his in Loughborough in 1816. But with all this, the mystery still remains – why did the Luddites take Ned Ludlam’s name?

“It was a cover name, the same as Robin Hood,” local history enthusiast Brian Kibble told the Mercury in 2006.

“They used it to protect their real names. The Luddites supposedly got their name by the actions of Ned Lud, or Edward Ludlam, from Anstey. 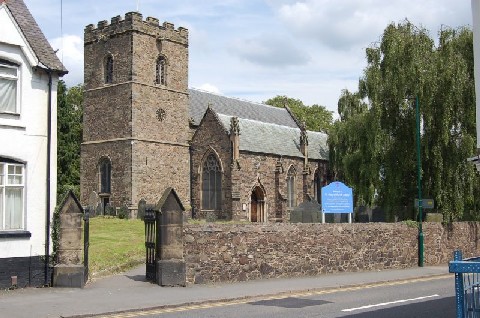 “Ned, well, he wasn’t quite all there, and that is one of the stories that has come down.

“There’s a story that he’d been teased by local children, and he chased them and he lost them. And, apparently, in his frustration, in one of the cottages, he smashed up this knitter’s frame.

“The other legend was that he was the son of a knitting frame worker and his father had chastised him one day and, in revenge, he smashed up the frame.

“Whatever the truth,” says Brian, “somewhere along the line he seems to have been responsible for smashing up machinery.”

Ned’s name lived on in the village down the years.

“Apparently,” chortles Brian, “it used to be a saying in the village that if something was broken or damaged it had been Ned Ludded.”

Ever since, “Luddite” has been a Leicestershire-inspired entry in the Oxford English Dictionary. One, as a word for the English workers who fought for their jobs between 1811 and 1816, and now, more commonly, a disparaging word used for those opposed to or uneasy with new technology.