History The priest that came back and other odd stories

The priest that came back and other odd stories

Old newspapers, journals and books are a rich source of eerie WTFisms …as exhibited by these few pieces of shrapnel below.

Having rifled through city and county’s past the most disturbing tale was found in John Nichols’ near biblical History of Leicestershire.  Nichols himself relays the story in hushed tones and sorrowfully admits that despite its vintage (said incident occurred a century before he committed it to ink), he’d heard its horrors from more than one source.

That particular tale will not be found here because once you’ve heard it, you don’t forget it. I have saved you the burden of its knowledge by not regurgitating it into the digital age.

So, without further waffle, here’s a few weird ones from the past. Many thanks to those old newspaper reporters who have long since left this mortal coil for supplying the original information.

On July 25, 1929, the flock at Leicester’s Holy Cross Priory received the most unusual mass.

“I ask you to pray for the soul of a priest who has passed over, and who is greatly in need of your prayers,” spoke an unusually anxious Father Fabian Dix to the blinking congregation.

Father Fabian’s announcement had come as little surprise to those who knew of the shocking happenings at Holy Cross, a handsome church striding New Walk and Wellington Street.

The brothers at the church confirmed in a report in the Western Daily Press that a pain distorted figure had passed by them crying “Pray for me!” and that Father Wylie had first been seen a year after the churchman’s death.

The article explained the ghost was eventually seen by Father Fabian only “a few days ago, passing through the sanctuary of the church and through a door near the altar into the Sacristy”.

A ceremony of exorcism had been held at Holy Cross, with priests chanting and sprinkling holy water around the altar, and a Roman Catholic bishop had been contacted to repeat the process.

Father Wylie was the nephew of the famous judge Lord Brampton, concluded the article, and had died a painful death in Gloucestershire in 1925…

And that was as far as my little story went when it was published in the Leicester Mercury. However, I’m going to have a look at the archives to see if I can beef it up a bit more. There are too many unanswered questions. 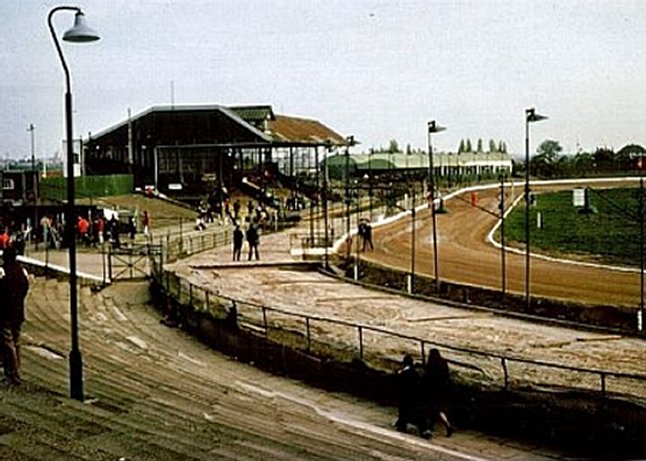 It had been a tragic accident, the death of dirt track star Roy Reeves. On Saturday, November 21, 1929, upwards of 30,000 people saw him hastily depart this life on the oval course at Leicester Speedway.

And yet the following Monday night, Roy was there again. At the same time and at the same spot, in his track suit and helmet.

“Last night a mysterious something compelled me to go to the track,” explained his wife on the front page of the Nottingham Evening Post.

“I was with a chum of Roy – Cyril Hefford – and two mechanics, and we were walking round the track in the dark. We came to the spot where poor Roy was killed on Saturday night.

“Then, suddenly, he appeared. He smiled at me. I could not move, we were so startled. I heard a cry from one of the mechanics, who was just behind me.

“My husband spoke to me and said he wished me to wear one of his medals. My mother he wanted to wear another of the medals while the favourite one was to be buried with him. There was a good deal more in the conversation, but it is far too sacred to reveal.”

The story was corroborated by a sheet-white Cyril, who used to be amused at Roy’s interest in spiritualism.

The first he knew of Roy’s presence was when one of the mechanics exclaimed “My God, I have seen him!” and he turned round to see the mechanic leant against a barrier sobbing.

“We were walking round the track, and when we reached the bend we all suddenly stiffened,” he said. “It was an eerie feeling. I cannot describe to you just what it was.

“I had been thinking about my visit to the mortuary at the very moment I seemed to see Roy. He was just very much as he was at the mortuary. We were very much cut up about it.”

Asfordby is a pretty village out towards Melton which sits fat and happy in the rolling greenery of ancient fox hunting country. The village rectory, next door to All Saints Church, is a late 18th century mansion with a river at the bottom of a long neat lawn. An idyllic place, you would think, to live with your loved ones. And it would have been, if not for the poltergeist.

In 1913, it was reported that the house had been plagued by a poltergeist for the past 30 years.

The reverend, a Mr FA Gage Hall, had tried and failed to rid the house of its unwanted visitor – a spirit who took great satisfaction in covering people in bedclothes or tearing them away in the middle of the night.

In the end, the rector resorted to conducting an exorcism. Putting on a cassock and surplice, he went into the affected parts of the house and “in the name of the father, the son and the holy ghost” he commanded the spirit to depart.

“I believe,” said the rector, “that my action has been successful, for we have since seen or heard nothing of the ghost.”

The Rev C H Strudwick, vicar of Whetstone, had recently slept in some of the haunted rooms. He spoke of being woken in the small hours, with someone violently tugging at the bedclothes. He held on tightly, but he lost the tug of war. On examination, he found the room empty and that the door was still locked from the inside. The next night it happened again and Reverend Strudwick was happy to move room.

In the course of the interview with the Yorkshire Evening Post, the rector said how his family had heard the ghost tramping along the corridors of the house at night. And that servants had been scared by strange happenings and noises.

But thankfully, in August 1913, Mr Hall dispatched the poltergeist for good.

In 1953, the building ceased being a rectory, was renamed Beechcroft and was graded by English Heritage a respectable II*. There are some splendid and copyrighted Francis Frith photographs of the building online. In 1776, in the blink and you’ll miss it village of Aston Flamville, near Hinckley, the residents cried “witch” and rounded on a poor elderly woman.

They tied a cart horse rope around her middle and dragged her, several times, into the horse pond, according to John Throsby’s account of 1790. Apparently, the horse pond was part responsible for the woman’s survival as it was too shallow to assist in the villagers’ murderous intent.

“She was at length rescued from her perilous situation by some neighbouring gentlemen,” added Throsby, “who reasoned these illiterate beings out of their inhumanity and folly.”

The squire of Bottesford was shaking the sleep from his head one morning when he walked downstairs and into an unholy clamour. Amid the noise he made out the words “witches” “possession” and “spirits”.

This wasn’t 16th century Leicestershire, however. This was February 1879 – two and a bit decades shy of the 20th century.

The peculiar story – set in Leicestershire’s most northerly settlement – was laid bare in the correspondence page of the Pall Mall Gazette the following month.

The Soulby family in the village had seen their cottage windows smashed and floors torn up, all claimed Mr Soulby, as a result of witchcraft.

The writer in the Pall Mall Gazette continues:

“The old man assured him that he had seen a brick rise from the floor, settle “like a bird” on the sofa, and fly though the window, that a basketful of mangel-wurzel had raised itself from the floor and knocked its head against the ceiling, that a tin saucepan had taken flight from the hob, flown through the window, and, after wheeling about in the air sometime like a swallow, had returned to the fireside; and that as he was coming downstairs he had met a large can of water walking up “step by step” and I suppose without spilling a drop.”

The manifestations continued and the villagers became more frenzied. It was only the squire, the vicar, their families, the owner of the cottage, and the police who did not blame the supernatural.

The Wesleyan minister called a man “an atheist” and threatened to knock him down as he refused to see “the finger of God” stretched forth at Bottesford. Crowds collected around the haunted cottage. One Sunday, nearly 1,500 people arrived at the railway station, many from Sheffield and Doncaster, to see for themselves.

As the wild talk went on, people began to dream up punishment for the witch, a local they knew as “Our old Sall”. The prospect of violence caught the imagination, “drawing blood” had been mentioned.

People did the phallic sign, protection against the evil eye, as they passed the cottage. A farmer in the neighbourhood, learned the writer, had placed an advert in the local newspaper office “for a wiseman” to come and “take the witchcraft off him”. He had lost horses and oxen to the witch, “or, as I suppose we ought to say, the warlock, being a lame old man who turns himself into a black dog and bites cattle. The farmer says he has seen this person turn himself from a man into a dog frequently.”

The squire remonstrated with the foolish, but in Bottesford, all disbelievers were lumped in with the atheists.

“Now, Sir, these things have not been done in a corner, they have not occurred in a distant and sequestered nook, far from railways and newspapers. The scene is in a Midland county, inhabited by a population of more than average intelligence, and little more than an hour’s journey from the great manufacturing district of South Yorkshire. I think, Sir, with these facts before us, we shall be inclined to pay a little more attention to Mr Goschen [Who believed civil rights belonged only to those with clear intellect) and a little less to Mr Gladstone on the intelligence of the working classes.”