Feature It’s all about the Dalek scarecrow

It’s all about the Dalek scarecrow 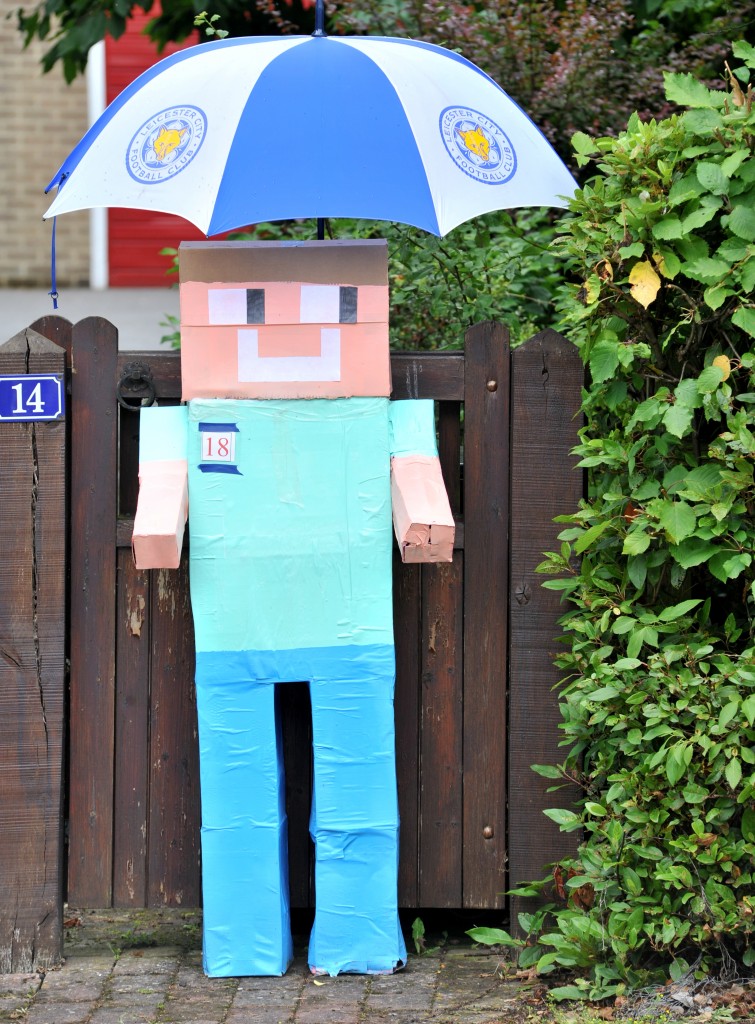 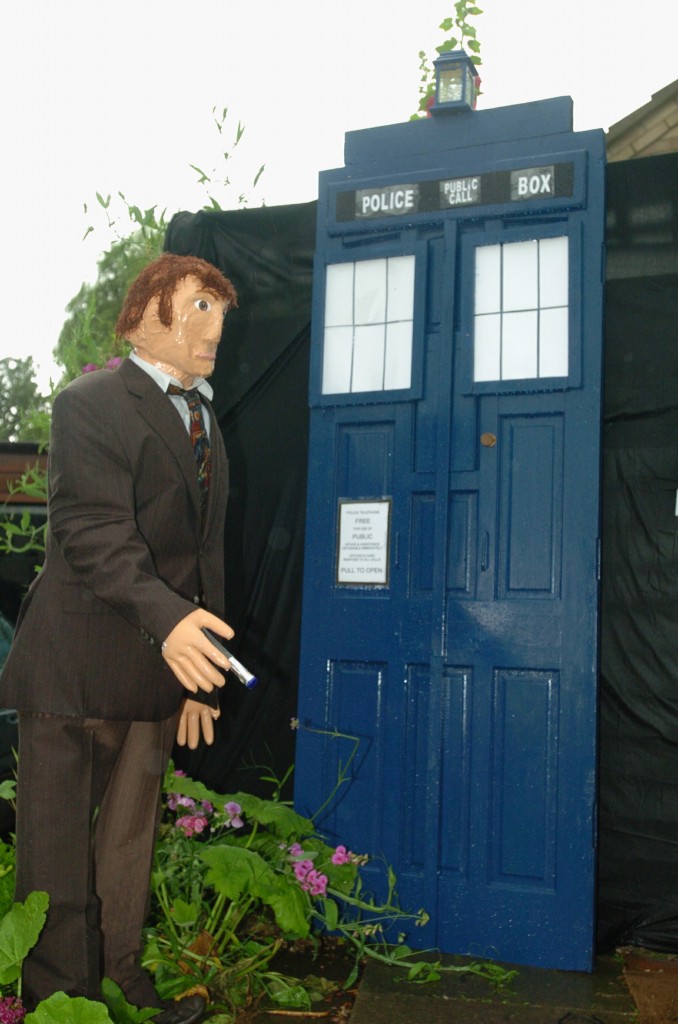 Heather Scarecrow Festival. Pictured is a Dr. Who scarecrow. 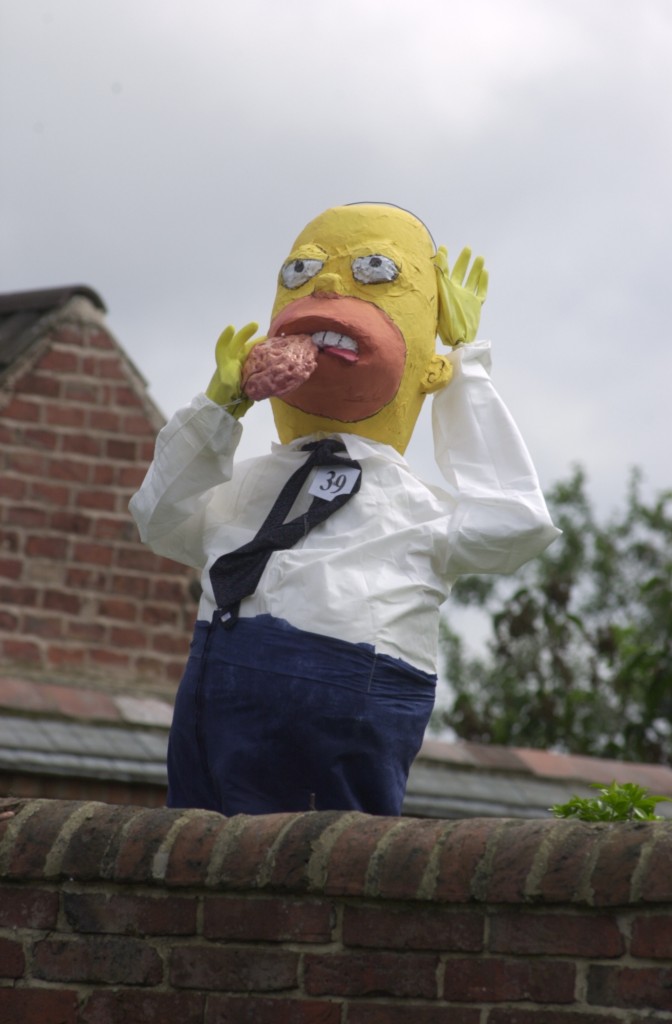 ‘Ghost of Foamer’ on Main Street 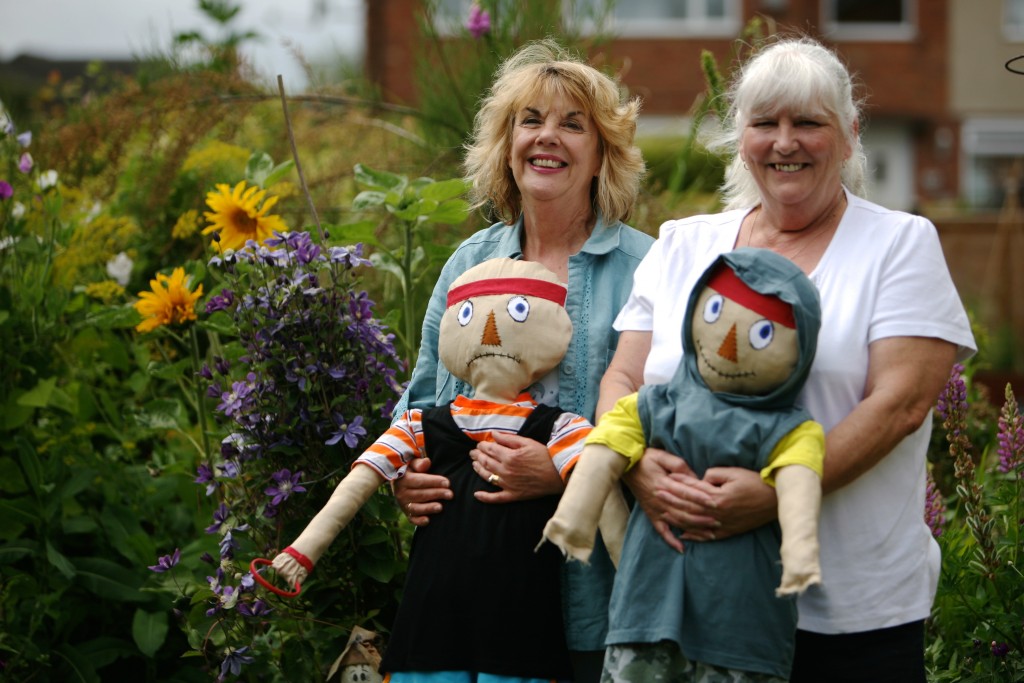 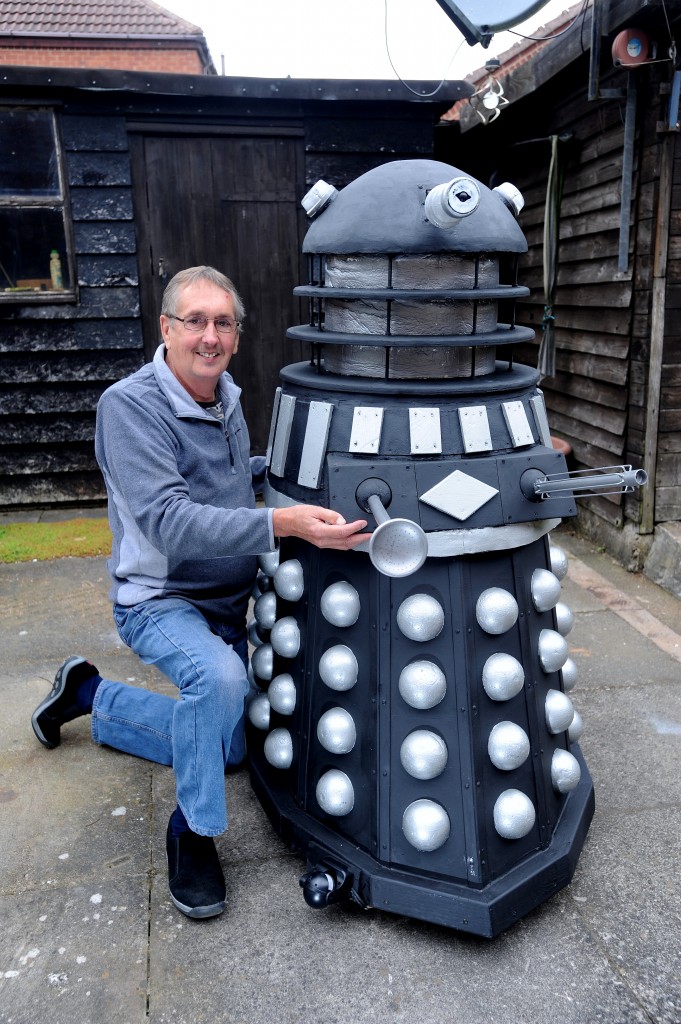 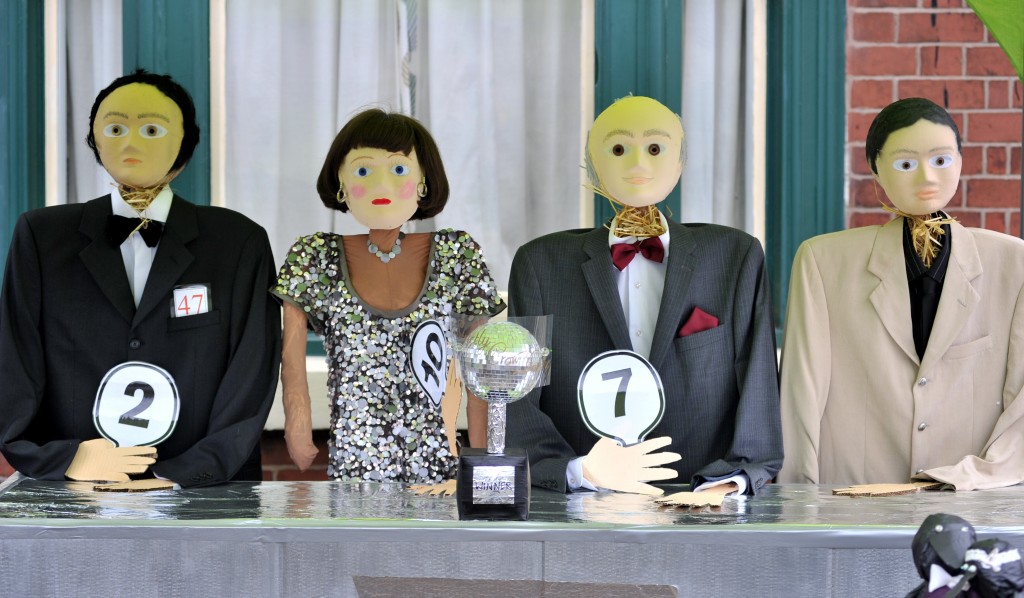 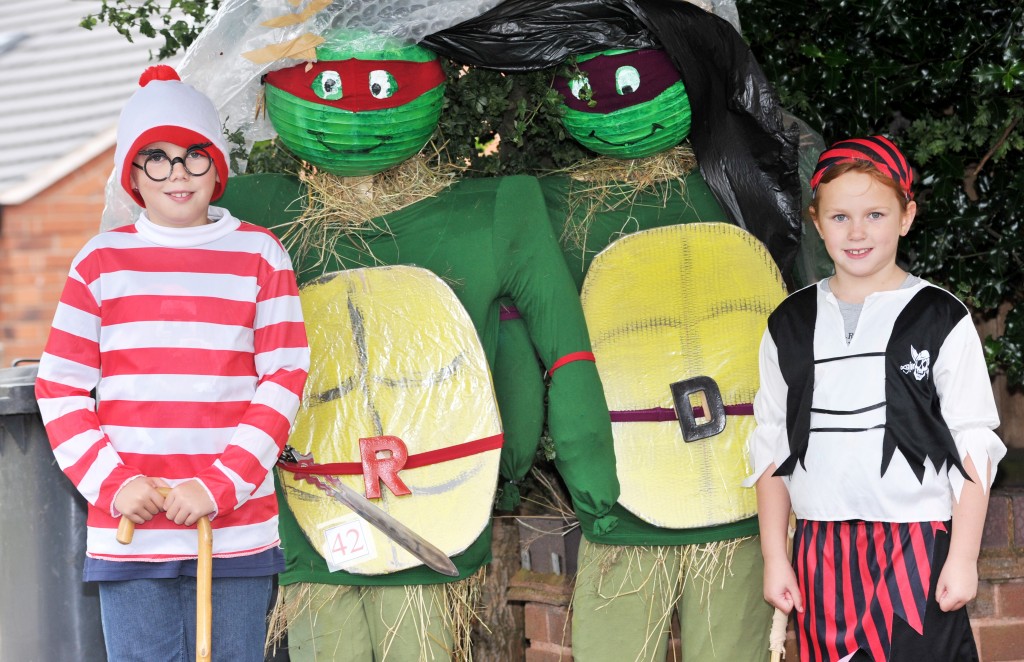 Heather Scarecrow Festival 2015… Callum and Harriet Oulds, 10 and 8, from Hinckley
PICTURE WILL JOHNSTON 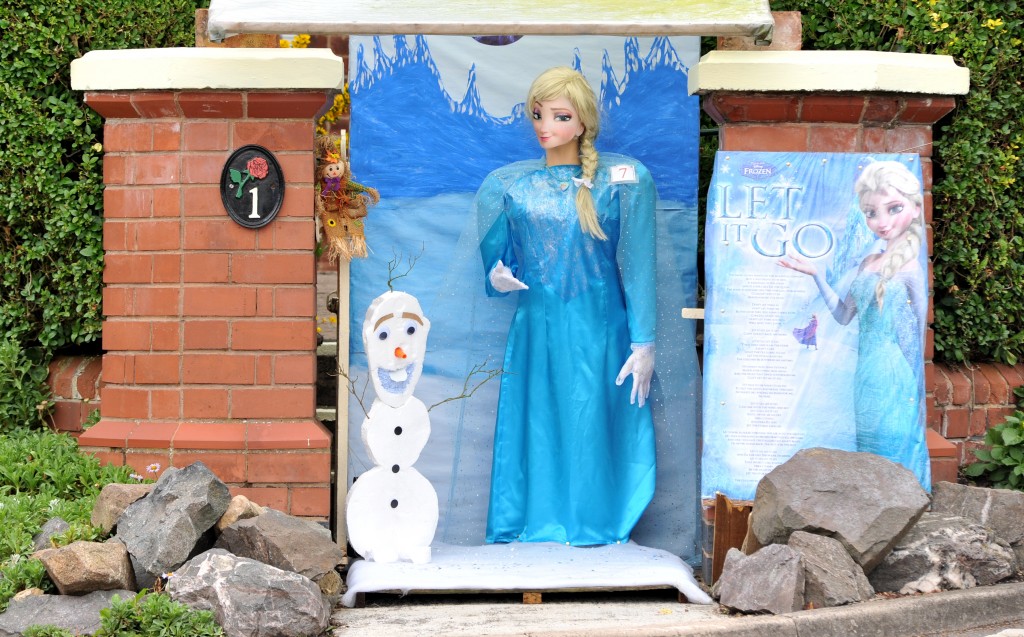 At this time of year the people of Heather like to go a bit batty. In a nice way. Across the village, wherever you turn, the streets and gardens are full of scarecrows.

Some will have a contemporary theme, some will be traditional and the rest will be completely bonkers.

Retired pallet maker Chris Statham leads us through his home in St John’s Close and out to his shed in the backyard.

“It were a challenge, that’s what I done it for, really,” he says. “Just to prove I could do one.”

It’s true to say that it top trumps and kicks the absolute stuffing out of the straw-filled variety.

Replete with a movement sensor, a flashing light and a moving eye, Chris’s Dalek also talks.

The Dalek has been six months in the making. It cost Chris £100 in materials alone. It’s a beast.

Could it take this year’s vote?

“I’d like to win. Or third. It would be nice,” says Chris, with a non-committal shrug.

“I hope people come and see it and kids enjoy it and it doesn’t frighten them when it starts up.”

This, ladies and gentlemen, is a drop in the ocean.

When Sunday comes around, Chris’s crow-cum-Time-Lord-bothering creation will be but one of 80 scarecrows on show.

Of course, an event like this doesn’t organise itself. When a two-pub village with 300 homes welcomes 8,000 to 10,000 visitors – the furthest so far from China – you need the solid backbone of an organising committee.

That’s where the likes of Marina Brooks and Marilyn Durdey come in.

The ladies are among an eight-strong team that gets this show on the road. They began meeting in January to organise the 17th Heather Scarecrow Festival.

Come 11am on Sunday, and for the next nine days, the fruits of their labour will be seen and enjoyed by thousands.

“It takes over your life,” admits Marina, who has entered scarecrows in every festival since it was started by Di Everett two decades ago.

“I used to do a scarecrow and that was it,” adds Marina.

“It’s just fun,” she says. “I used to like sitting in the garden and hearing the children squealing.”

Then, as the event grew bigger, more people were needed to pitch in. One year it came close to stopping – the final straw as it were – but councillor Dr Hannah Brewin stepped in and kept the event going.

“After five years, Hannah stepped down,” says Marina. “Again, we were appealing for people and Holly Johnson stepped in and Marilyn and Julie. Holly’s been pulling it all together. And there’s also Karen, Peter, Alison and Marlene… People don’t realise how much goes in to organising something like this.”

It’s a quiet Monday morning before Sunday’s sightseeing storm, but just outside the window of Marina’s home in Manor Road, Jim Allen is busy at work painting the house two doors down.

“Now Jim,” says Marina, “did you see him on the way in? You should have seen what he did the other year.”

As it goes, Jim’s festival entry was flashier than a mirrorball at sunrise. His scarecrow was only a Spitfire with a pilot. Not quite full-size, but not that far off.

“It was enormous, the plane was the size of this room,” nods Marilyn, smiling and stretching her arms wide.

Visitors to this year’s festival, one that coincides with the village music and flower festivals, (with another music festival, Strawberry Fields just held outside the village) will have a typical bevy of brilliant scarecrows to gawp at.

One of the entries is the Frozen-friendly Olaf In Summer. Which could feasibly be a puddle with a carrot. Another resident is submitting the very cheeky 50 Shades of Hay. Richard III even puts in an appearance. As does Crow-codile Dundee.

Deciding what kind of scarecrow to create gets trickier every year, acknowledges past winner and former committee member Pauline Pettitt.

This year, Pauline’s used the McCain-sponsored scarecrows of TV soap Emmerdale as her inspiration.

“We’ve got the granny, the young girl and the one with the football head. My friend down the road’s doing bucket head and spade head.”

The task, explains Pauline, is always approached in a serious fashion. This is no last-minute-homework-done-the-night-before kind of job. She wants their scarecrows to be as good as copies of the ones used by the chipmaker for Emmerdale.

“You have to go around collecting all the clothes,” she says. “We like to make them look like they are on the television. Getting the material together took a few weeks.”

Now completed, the scarecrows have taken three months’ work. But it’s that kind of dedication which pays off, both in satisfaction and prizes.

But it’s always a challenge choosing what to do.

“It’s very difficult,” she says. “Some things appeal to children, some appeal to adults. One of the things last year was a crow of David Walliams’s Ratburger. All the children knew what it was.

“A lady did Titanic, but on top of her roof. You know how they stand there with their arms spread wide? That was really good.”

Yet that’s not to say all of the scarecrows are craft-heavy. Some of the entries can also be brilliantly simple.

“Someone last year had cut a scarecrow in the grass with a lawnmower and you looked down into the grass and you could see the shape of the scarecrow. It was called No Mow Crow.

“After the event, after they cut it,” she adds, “the grass was brown where it had been. They put up a little notice: No Mo Grow.”

Naturally, times have changed and scarecrows aren’t just made of straw or hay. They can be made out of anything. And they are.

“Holly’s won last year. That was Despicable Crow,” says Marina. “It was the man from Despicable Me in the middle of a couple of Minions.

“We saw the votes going in and knew it was going to be popular. In the end it got thousands of votes.”

Heather, is, as you’ve probably guessed, a rather lively village.

There are people, say Marina and Marilyn, who’ve visited during the scarecrow festival and decided to move there.

Marina took a call from a lady in Kenya earlier in the year who was packing up and moving to Heather.

“I said that she could drop the entry money in afterwards. And she has, she’s entered this year’s festival. Her entry is called Masai Moran.”

So far the furthest visitors to the festival were a family from China on holiday.

“We get people from Hinckley, Leicester, Derby, all around,” adds Marilyn.

Another great sight of the festival are the minibuses that pull up, depositing senior citizens, pre-schoolers in Day-Glo bibs and children and adults with disabilities.

“It gets the community mixing and talking together and it’s lovely seeing the people that come to visit as well. Some people come from miles away every year and they love it.”

Behind the daft scarecrow stares, there is a more serious side to the event. It’s the sale of the village scarecrow guide that raises money for the village.

“Last year we sold 2,200 guides and usually there’s four people to a guide,” says Marilyn. “Lots of people go around who don’t have guides.”

Last year they raised about £5,000. It paid for the village’s hanging baskets and for donations to other village groups, a lot of which pull together to help make the event a hit.

St John’s Church will be doing refreshments on Sunday and the football club, which has ample parking, also plays its part. The new village hall is also turned over for visitors’ cars.

Lynda Hodges, in Manor Road, will be hosting the annual Heather yard sale on her driveway during the festival. The yard sale makes a cool £1,000 every year.

There’s also the very popular Sammy The Village Scarecrow Treasure Hunt. It’s where children have to locate 15 Sammies attached to entries around the village to win a prize.

As you can imagine, the scarecrow organisers are hoping for good weather this Sunday. They’re hoping people across the county will, over next nine days, go along, chip in two quid and have a pleasant wander through the village.

“It’s quite a big walk round,” acknowledges Marina. “But it’s worth it.

There’s a person who enters each year, who sticks to the same theme – Old Red.

“Old Red is a bit of a walk to get to and not everyone goes out there, which is a shame,” she says.

“Old Red is a little trek out of the village and down a hill. It’s coming back up the hill that’s the problem for some.”

Old Red was a single scarecrow the first year he started, but he spotted a lady scarecrow in a nearby field. Each year there’s new rhyming poetry that tells the tale. Old Red Gets Wed was followed last year by Old Red Needs A Bigger Shed, now that he has kids, and this year – shock horror – it’s all gone wrong.

Heather Scarecrow Festival will take place from 11am on Sunday, to Sunday, August 2.