He’s a reluctant national treasure who has been exploring the natural world for 60 years. Sir David Attenborough talks to Catherine Turnell about growing up in Leicester, not discounting the yeti and nature fighting back. 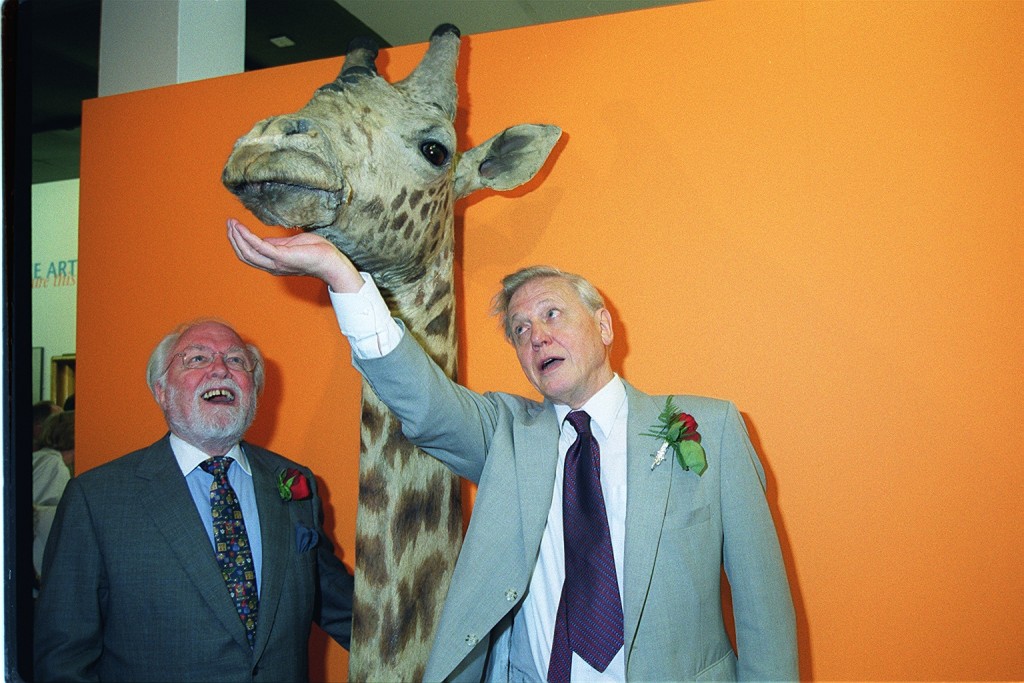 Sir David Attenborough is a man who requires little in the way of introduction. The wispy-haired naturalist has been a telly mainstay for the past six decades. There are quite possibly tribes in West Papua who can do pencil drawings of the man dubbed “the great communicator”.

Yet it’s less well-known this one-time tickler of primates has a reputation, at least in journalistic circles, for being a little on the prickly side or, to give him his name in Latin – Spicatus Attenboroughi.

Even the Mercury’s humble contacts list has Sir David’s phone number with the words “very scary” written alongside.

So when I phone to ask for an interview marking his 60th year exploring the wild, it is done tentatively.

Seven rings later and a voice answers – but it’s not that mellifluous world-recognised whisper.

“Let’s do it now,” huffs Sir David, as if talking about impending dental work.

It’s an invidious starting point, but I press on. Unsurprisingly, the first few questions fall flat and I visualise Sir David flaring his nostrils in annoyance. Quick: a question to bring him onside.

What does he think about plans to build a statue of former Leicester teacher Alfred Russel Wallace? That’s the man who came up with evolution independently of Darwin – and who was something of a boyhood hero of Sir David’s. Surely, that can’t be batted off?

There’s silence. “I think his position is about right, his bicentenary is coming up, in which I’m taking part.” He’s lectured about him to the Royal Society et al, he continues wearily, clearly exhausted at the prospect of being asked for jolly sentences on someone he has covered ad nauseam.

He knocks the question away for six.

Okay. A lighter question. How about the numerous species named after him – the flesh-eating pitcher plant, the marine dinosaur, that flower in Ecuador or the parasitic wasp… Does he have a favourite?

“I’m very flattered by them all. I’m grateful to be given such compliments. Why should I choose one over the other?”

Ultimately, the interview flounders like a polar bear on a melting iceberg. And for good reason. I’m too much of a fan. Too conscious of how small and stuttery my voice has become, and too surprised at how the long-held image of a kindly great grandfather is fading rapidly away.

Too aware also, that the Mercury and Sir David have been dancing this strange dance for nigh on six decades.

It begins with that time-worn line, “Hello, Sir David, it’s the Leicester Mercury here,” and then, somewhere on a leafy street in Surrey, the alarm bells go off. In the wild, it’s the equivalent of the “danger approaching” siren which has a meerkat standing to attention and urgently thumping a foot against the ground.

This peculiar courtship between a Midlands daily newspaper and Cambridge University’s most recognised zoologist is laid bare in a tan cardboard folder, marked ATTENBOROUGH, DAVID.

The Mercury’s cuttings file is so old, it’s pre-knighthood. At some stage someone has attached a sticker to the front: “NOT Leicester born’.”

The first cutting is dated February 19, 1955. It talks of David’s journey to Sierra Leone to capture a rare bird for London Zoo. Another, dated September 20, 1956, mentions how he’s sick with malaria after filming in Indonesia.

But hidden between the inch-thick yellowing newsprint, there’s another story we Mercury journalists inevitably don’t ink and have been tip-toeing around for years. And that, simply put, is Leicester’s claim to the man currently grimacing on the end of a phone in Richmond.

David Attenborough was six when he moved to the city with his brothers, Richard and John. The move coincided with his dad, Frederick, taking up position as principal at Leicester University College.

David lived on campus for the next 12 years before his studies took him from Leicester to Cambridge and then to the BBC – and the rest, as you know, is televisual history.

Which means our claim covers just 7.16666666667 per cent of his life, although we’ve been wringing every drop of sweet ambrosia from it ever since – in countless stories about him selling newts from his garden pond to the uni’s biology department; or crayfish hunting in Bradgate Park; or cracking open rocks coiled with fossils in Tilton on the Hill.

It’s to Sir David’s eternal credit that he spares us 20 minutes of his time.

He may have left Leicester’s landlocked shores 68 years ago, but it was here that his love of nature first blossomed.

As a 12-year-old he spent his free hours as a volunteer in the geology section of New Walk Museum. Or he’d get on his bicycle and pedal to places such as Tilton and Billesdon for a spot of recreational fossil hunting.

It’s those memories that stay with him, he says, when thinking of his youth in Leicester. And of visits to the cinema, or to see plays at The Theatre Royal or the Little Theatre – where his older brother Richard first trod the boards, or to De Montfort Hall for classical music.

“The accessibility,” he says, that’s what he cherished the most. “To get on a bicycle and to get out into the country within 30 minutes and when there, start collecting fossils in the iron stones at Tilton.” The ice man thaws suddenly. Phew.

Later this month, BBC2 will be airing Attenborough: Sixty Years in the Wild. It charts Sir David’s life on camera. It will be looking at discoveries in biological sciences, advances in wildlife filmmaking, and how our relationship with the natural world has developed since 1952.

For Sir David, it’s a career that’s seen him examine the minute creatures of the upper atmosphere, rope climb the upper branches of a 200ft giant redwood and encounter orangutans in the wilds of Borneo.

In the defining natural history series, Life on Earth, which he started in 1972, his work spanned the amoeba to 20th century man. He wrote the scripts in six months and filmed for three years.

“It’s rather like a Mozart opera,” he once explained. “The score is so marvellous that even if you do it badly, there will be moments of transcendent beauty.”

His first telly venture was Zoo Quest, a programme which saw him pluck rare specimens from the wild and bring them back to London Zoo in 1955. PC it wasn’t.

“I had a great time,” he says, sounding suddenly cheered. “Zoos don’t do that any more, ideas about conservation have become a lot more serious.”

In those early years, David brought a number of animals back to the family home.

“When I had a young family, we kept all sorts of things.” That includes miniature parrots and even a manatee. There aren’t any animals at home now, not even a cat, he says. “I go away too much and live by myself,” he explains. His wife, Jane, died in 1997.

In 2008, he came back to Leicester and the county to film his First Life series. Looking at the oldest multi- cellular organisms on earth – among them Charnia Masoni, a 560 million-year-old fossil which was found in rock in Charnwood Forest in 1957. It’s now on permanent display in New Walk Museum.

Which leads me to ask, does he feel content with his life’s work?

“I’m perfectly happy, looking at things,” he says. “I was pleased to make Life on Earth which started a new phase in natural history television programmes, and which was a fairly ambitious thing to do. But that was the first.”

Are there places he feels could do with closer exploration?

“I should like to go back to the Gobi desert,” he says, “I don’t think I shall go back there.”

So no plans for retirement?

“I’m still going. I’ve just finished three programmes in 3D on the Galapagos. And I’m going to China in January to look at the discoveries there and then after that,” he pauses, “I don’t have plans.”

There might be a good reason for 2013’s open diary. These days Sir David’s mobility is “not very good”.

“I’m contemplating having knee replacements,” he reveals. In fact, he’s got the hospital date all sorted. The operation is taking place at some point in the new year. “I don’t particularly want to go into it,” he adds.

His older brother Richard, the actor and director, it turns out, is faring less well with advancing years. Lord Attenborough has been using a wheelchair since a fall in 2008 nearly cost him his life. He now requires around-the-clock support. It’s a thing, says David, but when you’re 86 you can’t remember everything. After all, he’s old enough to recall seeing the road being cut through Charles Street.

He apologises that he can’t remember a story he once relayed to the open-mouthed boys of Wyggeston Grammar School, after headmaster JC Larkin introduced him as a “good, though not perfect pupil”.

It’s a cracking yarn, preserved in that cuttings file, about David being stranded on an island and being given a lift to civilisation by the captain of a visiting schooner. When the captain learned David was from the Midlands, he asked what school he attended. On hearing it had been Wyggeston, he replied, “I’m Alderman Newton myself.”

It was a true story. A few cuttings on and we have the name of the captain. Commander Stanley Brown MBE – he was born in Leicester, educated at Alderman Newton and pioneered the Fijian Navy.

There’s another nice story in the file about Sir David coming back from his travels in the small hours, climbing into bed next to his wife, Jane, and then waking a couple of hours later pouring with sweat. David thinks he’s picked up another bug, when it turns out there’s an electric blanket on the bed.

There are a number of things that stand out in the cuttings. One article mentions Sir David eats pork pie for breakfast. Could this be an echo of his Leicestershire past?

“I don’t have pork pie for breakfast,” he corrects, disappointingly, “but I do eat them. I have muesli for breakfast.”

“I don’t believe in it,” he says, sounding shocked. But you were quoted saying: “There has to be a reason why there are those footsteps, you don’t play practical jokes at 26,000 feet”. You did say that, didn’t you?

“It’s difficult,” he reasons, “there’s a possibility, that’s quite different to believing in it. There’s no proof.”

As for being at the helm when the BBC introduced the first colour television in Europe in 1967, he refuses to take the credit. “That would have happened had I been there or not. I’ve had extreme good luck in the circumstances in which I was working. In television, it was a good time for the BBC, operating as a monopoly. We had very little constraints and a lot less money.”

Sir David’s concern these days is with there being enough natural environment left for future generations to enjoy. And that means proper population control – giving women worldwide the power over reproduction.

“The population of the world is still expanding no matter what anybody is doing and still one hopes that it will trail off eventually,” he says.

“The fact of the matter is the Earth is a finite place and what food is grown is also finite. If we continue to increase our numbers, this is just absurd.

Sorry. You mean the Earth is fighting back? Like a dog shaking itself free of fleas? As in Dr James Lovelock’s Gaia theory?

“Gaia’s a romantic way of looking at it,” he concludes.

“But what else is it? That is what is happening. The land just can’t sustain it.”

Sixty Years in the Wild starts on BBC2 at 9pm on Friday, November 16. This feature interview was first published in the Leicester Mercury in November 2012.