Uncategorised The secret to a long life? Keep breathing

The secret to a long life? Keep breathing 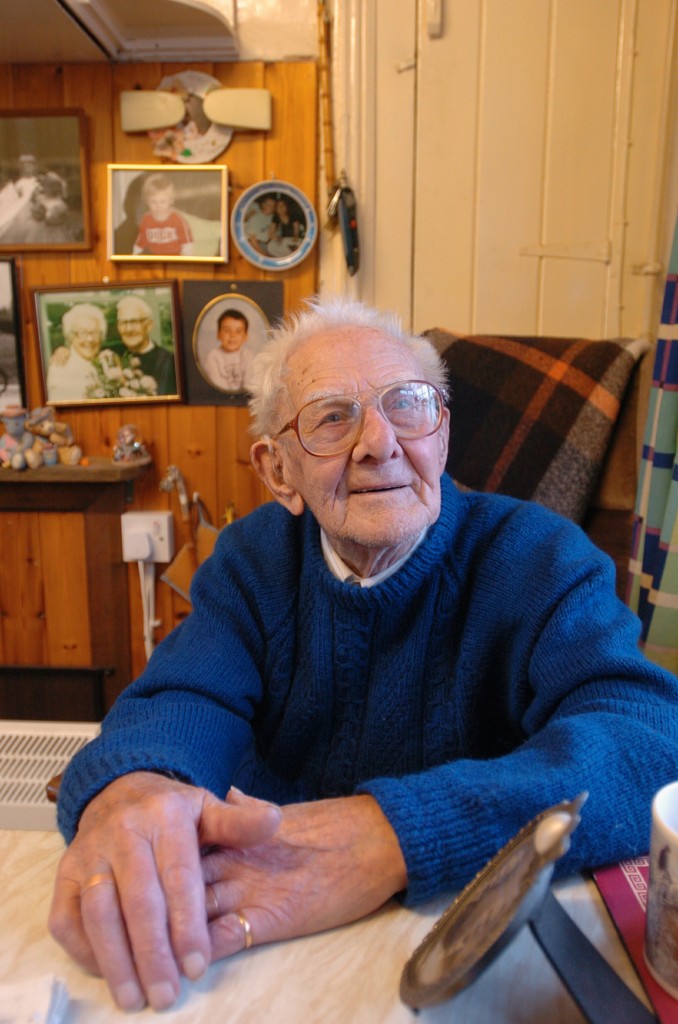 On January 19, Stapleton resident George Fray will be celebrating his 101st birthday. Catherine Turnell went round for a cup of tea.

In the kitchen of a farm house in the tiny village of Stapleton the temperature is nearing the mid-20s. Sat in the corner by the electric heater, centenarian George Fray is in a woolly blue sweater. Wearing thick glasses and a hearing aid in each ear, the great-grandfather leans forward.

“What’s the secret to living to 100?” he repeats, putting his papery hands on his knees and giving you a square, no-nonsense look in the eye.

Pausing for the briefest of seconds, George responds. “Keep breathing,” he says, sounding as earnest as a five-year-old; his watery blue eyes twinkling with mischief.

“I guarantee you will live a long while if you do that. Stop breathing,” he warns, “and you’ve had it.”

Since his birth in Clarks Yard – “At the side of the Liberal Club” – in Hinckley, in January 1905, the centenarian with a full head of hair has seen it all.

Two world wars. The invention of moving pictures, the arrival of the aeroplane, the decline of the train. The rise of radio and the birth of television.

“I’ve seen a lot of things in 100 years,” nods George taking a rubbery slurp of tea, “no end of things.”

One of nine children, he was 12 when he started work at a needle factory in Hinckley.

Still at school, he worked 60 hours a week to earn four shillings.

After leaving school, he set up a haulage business.

Although today his eyesight is bad and he is nearly as deaf as the proverbial post, there’s nothing wrong with George’s memory.

“I think when you are going blind you can remember things more,” offers George with an ‘I don’t know why’ shrug.

A heart-shaped picture frame on the kitchen window ledge contains a sepia snap of his mum Emma and dad Shadrack. The pair are buried together at Hinckley Cemetery.

“My dad always said, ‘If someone’s going to hit you, you’ve got to hit them first’, chuckles George. “It was terrible advice.”

Over the years, this little nugget of backwards wisdom got a young George in no end of scrapes.

When thinking back to his Dad, he remembers the big fairs which used to attract townsfolk and gypsies.

They would run the length of Regent Street, Hinckley’s main thoroughfare.

“He was always ready for a fight, bare knuckle fighting, so the fair people billed him as Champion of Hinckley, fighting this man who had never been beat, who belonged to the fair.

“Anyway, my dad was bound to be the Champion of Hinckley because no other silly bugger would do it. My dad said he couldn’t win – no matter how much he pasted his opponent – because the referee was with the fair.”

One of George’s favourite stories is the time he and his brother, Jack, decided to visit the seaside.

George was 11 and Jack was nine. It was September 1916, the school holidays, and summer was fading over land-locked Leicestershire.

The brothers thought Hinckley to Skegness was the same distance from Leicester to the market town. Instead, it was about 100 miles away.

Borrowing the bikes they used for their deliveries, they set off very early in the morning.

Cycling past Melton, they could see a German zeppelin had been shot down. George remembers the sight of wounded soldiers in blue flannels and Red Cross nurses.

In those days, ambulances were horse-drawn carts – or you used the train or bicycle, hardly anyone had a car.

Repeatedly stopping for directions on the way, the great-grandfather of seven remembers that people in Boston, Lincolnshire, had no idea where the brothers could find Skegness.

Further, no-one had even heard of Hinckley.

“It took more than 12 hours,” remembers George, eyes misting over.

When they finally got to Skegness, the sun had already set and the pair kipped down in a beach hut on the sand. Waking up a few hours later, when the tide had reached the structure’s bottom step, they thought they were going to drown.

With the moon high in the sky, the pair decided there was nothing for it but to cycle home.

Weary and hungry, the boys got back in the saddle and headed back to Hinckley, although the roads were just fields that had been partly cleared with a scythe.

“I don’t know what time we got in the next morning, but my mother never believed in locking anyone out. She said, ‘Where have you two been all night?’

“We said we’d been to Skegness and that it had a clock tower.

“She said, ‘You’ve been in Leicester all night! What have you been doing?’

“You know what?” says George with a faint shake of his head, “she never believed us.”

The one thing that comes through from this three-hour, one-sided talkathon is George’s indestructible sense of humour.

He even makes fun of the feedback coming from his hearing aid.

After repeatedly letting off an AC/DC squeal, he cups his crinkly hands around an earpiece, closing and opening them so it makes a very peculiar kind of music.

“Cuckoo, cuckoo,” he imitates, with a smiling guffaw.

As for the other details of George’s life, he married his sweetheart, Sarah, in June 1935, at a church in Barwell.

Together for more than 60 years, she died in her sleep on Christmas night in 2000. She was 99 and George misses her a lot.

Together, they had a son, Richard, and George lives with him and his wife, Margaret, in south west Leicestershire.

Retiring from full-time employment at Hinckley’s electricity board a remarkable 35 years ago, George has “the wireless” to keep himself amused.

The television’s no good, he says – he can’t see the screen.

A magnifying lens with a light allows him to read what he can and when he demonstrates, a cricket ball-sized eyeball blinks back.

“I could still get my dinner now,” says George, getting up to show the way out. “It’s just that Margaret does it.

“I can still use the toilet. I don’t walk so much, my legs hurt a bit. Oh, and I’ve got bad circulation,” he says, putting a little moan into his voice.

“See,” he laughs, wiping his eyes, “I’m expecting to be dead any day now.”