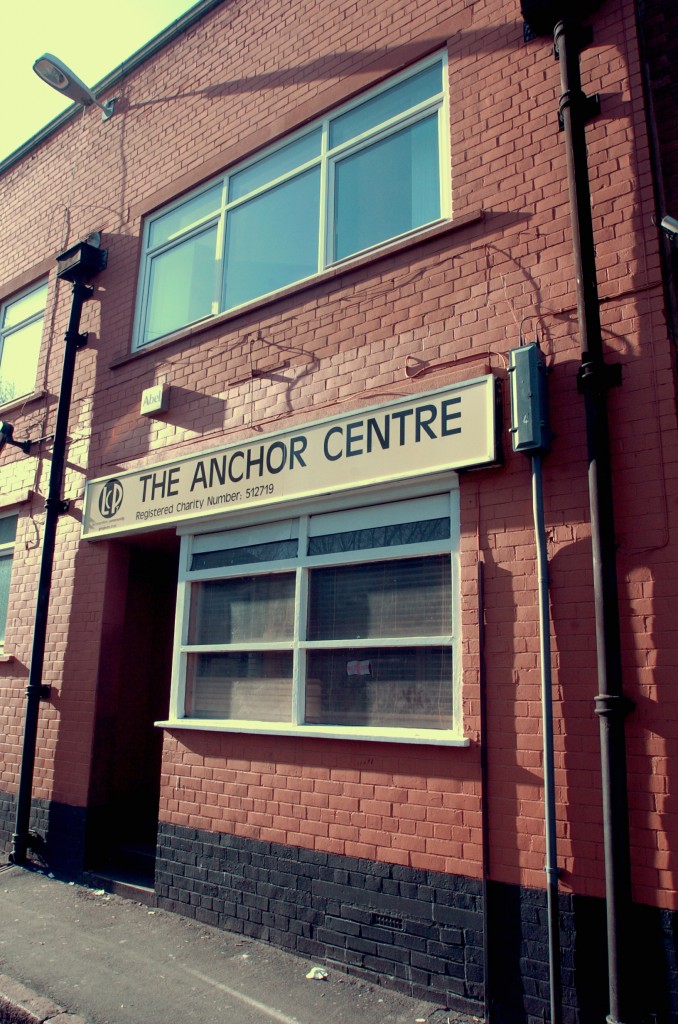 The Anchor Centre in the city’s Dover Street

John Chalmers thinks for a moment about what time would be best for a visit. In the morning, he says, there might be nobody there, but in the afternoon, they might be too far gone to make sense. In the end, he suggests coming along at noon.

“Welcome to the mad house,” smiles John, 24 hours later, holding open the door to a nondescript looking building in Dover Street, squeezed between a theatre and a printing firm.

Inside, a number of walking wounded scurry out of the way as the 50-something with a flyaway hair marches up to his office.

John doesn’t so much as blink as he squeezes past a fully-clothed man scrunched up asleep on a bench.

This is the Anchor Centre, in the middle of Leicester, on the inadvisable side of happy hour.

It’s where the stale reek of booze mixes with the stench of nights exposed to the elements and John, who’s been manager here for 10 years, has seen it and, well, smelt it, countless times before.

Outside, a series of empties on the street lead the way like breadcrumbs to the day centre’s front door.

Cheap alcohol, the sort of mouthwash cider that sends swathes of teenagers to A&E each year, is the Anchor’s tipple of choice.

The strongest, most dangerous drug accessible to his clients – alcohol – is also the cheapest, and totally legal.

What’s even stranger, he continues, is that in the middle of a national, Government-led alcohol strategy, this little city centre oasis, a stone’s throw from Granby Street, is under threat.

Funding from the local Drug and Alcohol Action Team is about to be cut.

The Leicester centre will lose £67,000 in October – that’s 60 per cent of its financial support.

It means, in all likelihood, this day centre for street drinkers will close.

“Crazy, isn’t it?” asks John with an incredulous shrug.

The 70 people currently on the Anchor’s books are either homeless or ex-homeless, but all are united by sharing an addiction to drink, drugs or both.

The Anchor provides its denizens with a square meal, a cup of tea, a shower, companionship, housing advice and health care. It even offers cookery lessons.

“You find most people in here who are drinking wouldn’t be accepted anywhere else – it’s illegal to drink on the streets.

“Many here are banned from the city centre and barred from the pubs. We keep these people off the streets and refer them to specialist services.” 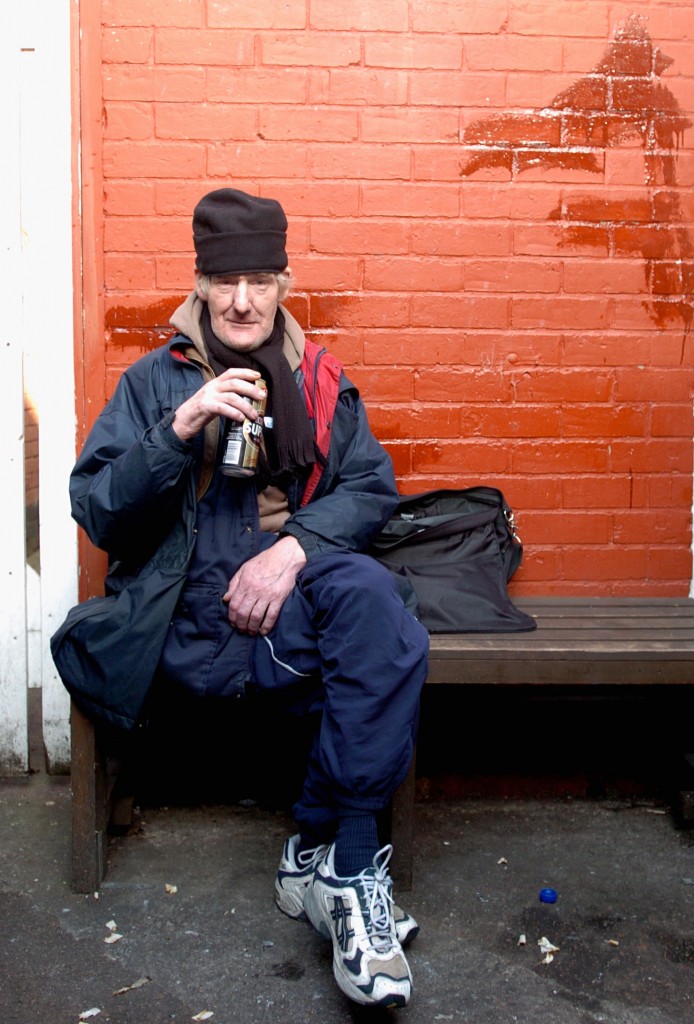 Life expectancy among clients here is just 42 – that’s 33 years below the national average. Between four and five centre users die each year.

Currently, about 60 per cent are without their own accommodation, with 22 per cent sleeping rough.

Ten of the centre users live in a squat up the street, the rest stay with friends and relatives.

About 80 per cent of the clientele are male, while 20 per cent are “ethnic minority”.

“Not surprisingly, almost all have health problems and a high proportion have mental health problems,” says John. “We’ve had people using this place who have then been murdered. There are women here who have been raped.

“The people here are much more likely to be the victims of crime than the instigators and that’s a point worth making.”

Downstairs, there’s a room with a graffiti-d wall doubling as a giant memorial. 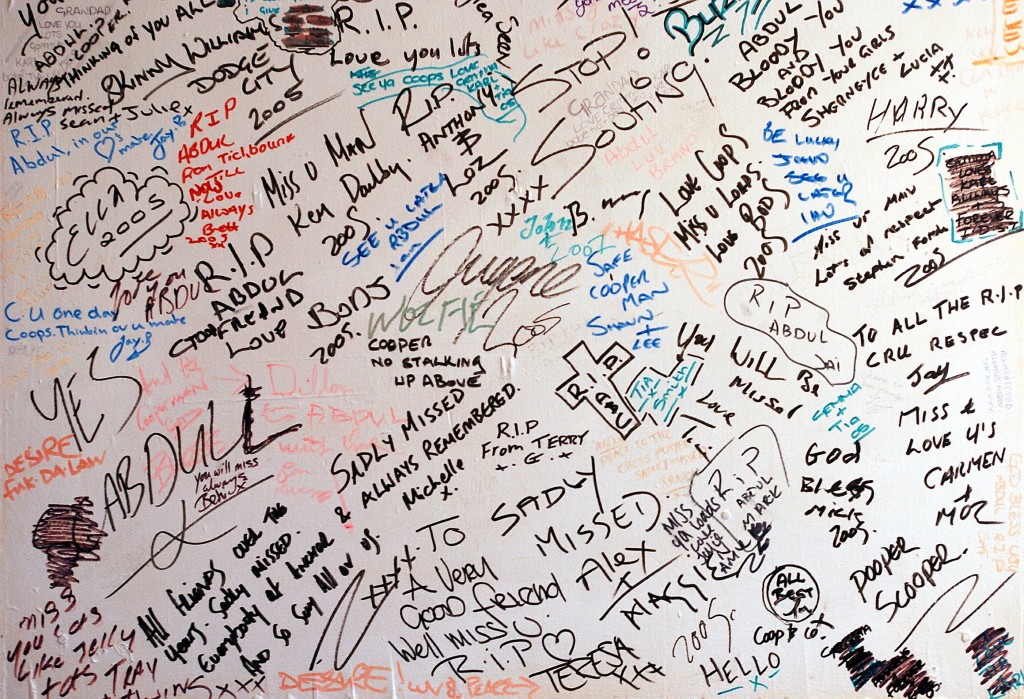 On it, photocopied images of former residents look down over scribbled words of love. Out into a courtyard with a bin full of empties, you will find half-a-dozen lunchtime drinkers. One man, wearing a Royal Navy cap, mumbles incoherently to himself.

Among the group is Andy. In his right hand, the 42-year-old is holding a coffee mug swilling with Special Brew; he started drinking at 11.30am.

“It’s a steady day,” he laughs, “I’ve had my trials and tribulations, you could say.”

Andy used to drive diggers, but something happened – he doesn’t say what – and he ended up homeless.

“For people who have never been out of work, they are never going to understand. All of us here have got a trade,” he says, looking around, “something we can do better than anyone.

“Anything can happen to anyone at any point in their lives. Life is finely tuned. The domino effect happens because one little thing goes wrong.”

Kev, sitting next to Andy, used to be an engineer and a forklift driver. Then came redundancy, an ensuing drink problem and, 12 years ago, just as his world was falling apart, he was introduced to heroin.

“This centre’s needed to keep people off the streets – I’ve been given a £75 drinking fine,” says the Leicester man, who, despite his history is friendly and coherent.

Jimmy, a former centre user, is happy to have a natter.

The 33-year-old first came here in 1998, shortly after his girlfriend, the mother of his son, died suddenly.

“I did suffer from mental health and drug issues and this place has helped a lot,’’ he says.

“They got me a hostel place and on a college course. I’ve known most of these people for 10 years, it’s like home from home. I come here because you still need a bit of support.”

Liz Alcott is a drug and alcohol project worker and enjoys her work at the Anchor Centre.

When the photographer raises his lens for a picture, Liz squeezes in with the clientele.

There’s what you might call a family atmosphere here, albeit a boozy one.

“This place stops people being so isolated. Without this sort of extended network people would be very lonely,” she says.

“You get to hear some really sad stories as well. The first time I came here I remember feeling a bit overwhelmed, but when you’ve been working here a while it becomes normal.

“You have to leave your job at work, you have to switch off,” advises Liz, “but you do find yourself thinking ‘that person is staying on the street tonight, they’ve got no food or money, I hope they’ll be all right’.”

Philosopher Andy returns to the fold once the photographer is finished.

“I’m not going to be here forever, but it does help. I think if things take a turn for the better, I won’t forget what people here have done for me.”

Pix and text courtesy of The Leicester Mercury. This article ran in, I think, 2008. The Anchor Centre is still hanging in there, although it’s now run by Inclusion Healthcare and the Leicestershire and Rutland Probation Trust.