Uncategorised The Battle of Frezenberg Ridge

The Battle of Frezenberg Ridge 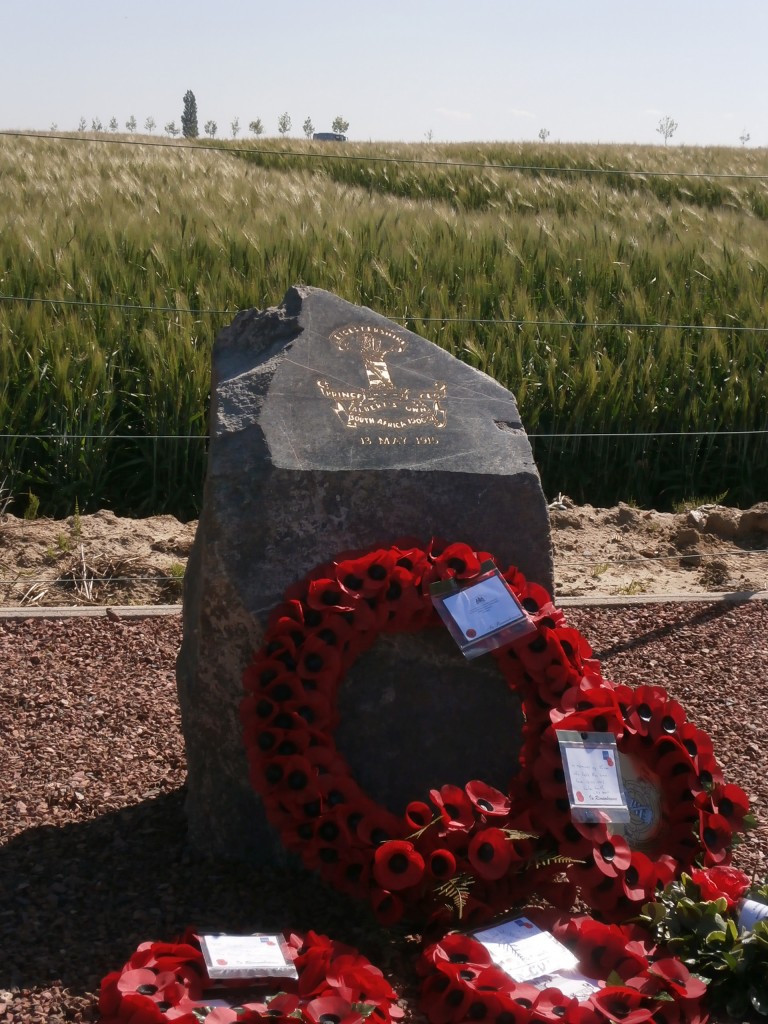 Tony Roe glances at the sloping field behind him and up to the trees on the horizon backlit by bright morning sunshine.

It seems hard to believe, but 100 years ago almost to the hour, Tony’s dad was here, holding the line with the Leicestershire Yeomanry, fighting off a blistering German attack.

Albert Roe was a farmer’s son from Saxby who had found himself in the bloodiest of battles to stop the Germans from reaching and claiming the nearby Channel ports.

On May 13, 1915, the cavalry unit were fighting for their lives in Belgium.

They were a few miles outside Ypres, in an open field without a shred of cover, as the Germans rained down bullets and shells, before charging their trenches.

“We will not chuck it,” was the chorus from our men as one by one their comrades fell dead. They remained true to their word.

The Germans pelted them from the front and their flank, but the line held – at an awful cost. Of the 281 men of the yeomanry who went into battle, 94 lost their lives.

Today, the fields are silent with the exception of bird noise and the sound of the families of the brave men of Prince Albert’s Own Leicestershire Yeomanry, who are here to pay their respects at the unveiling of a memorial to those who fought at Frezenberg Ridge, during the second battle of Ypres.

It’s a deliberately simple memorial, a sturdy chunk of Mountsorrel granite, decorated with the yeomanry badge and the date of the battle.

“It is intentional that it should be of Leicestershire granite and to the descendants it is hoped that they will feel it’s a suitable tribute to those who fell never to return,” says Honorary Colonel Robert Boyle, whose grandfather Lieut Col Evans-Freke fell at Frezenberg.

“The famous cry by Lieutenant Colonel Evans-Freke ‘Hold hard, Leicestershire Yeomanry!’ before he was killed by a sniper early in the day, ensured they stood their ground and saved the day.”

A century ago, Squadron Leader Paul Davey, of what is now B (LDY) Squadron The Royal Yeomanry, would have been one of the men in charge at Flanders. 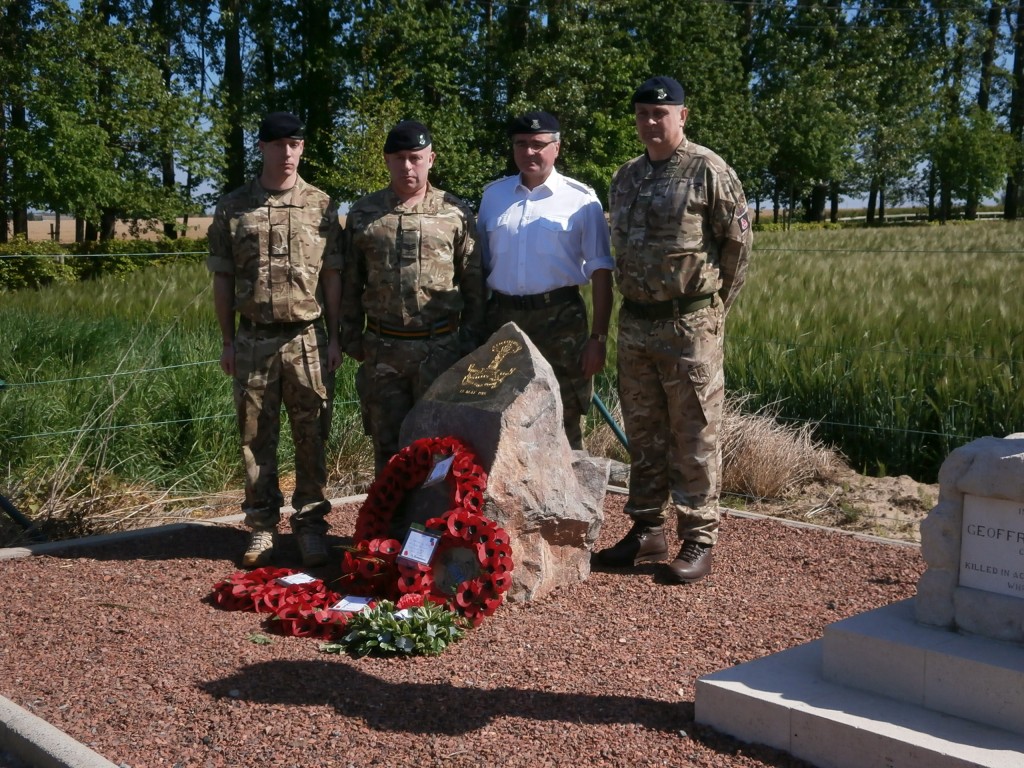 “I would have been somewhere over there,” he says, pointing over to the memorial, where regimental HQ stood a century ago. This peaceful spot, in Cambridge Road, is close to a now extinct railway line which is remembered by the adjoining Railway Wood, a place of retreat.

“But by this time, about 9.45am, it would have pretty much been over. The battle was done.”

Among the people paying their respects is Professor Perry, originally from Leicester, who travelled from Northumberland. 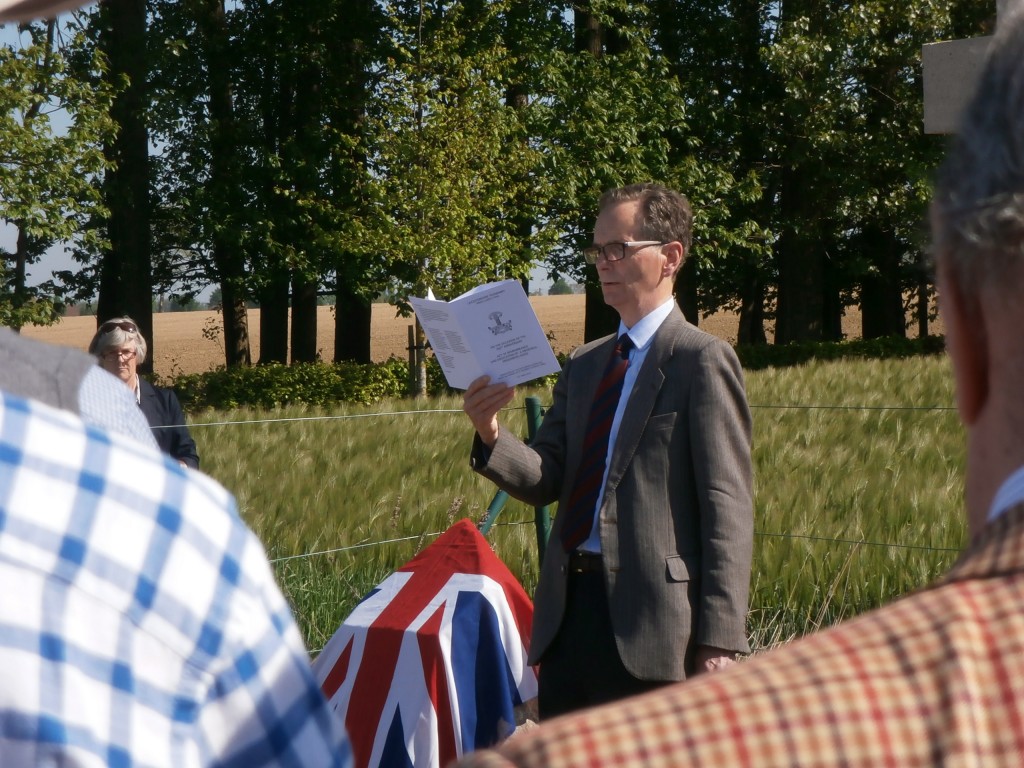 Colonel Robert Martin is also here with his family, including his son Edward who has just left the Army after two tours of Afghanistan. The colonel is here to commemorate Major William Martin, his great-uncle, one of the directors of Mountsorrel Granite Company.

“My father was only 13 months old when his uncle died.

“The major was a crack shot. He stayed behind covering their withdrawal. He knew he’d hit someone if he was shooting.”

Despite his bravery, the major was shot and killed and his elder brother, Colonel Martin, who was commanding the 5th Leicestershire Regiment nearby, learned of the news and made his way over, as fast as he could, to discover what happened.

About 100 people were at the dedication of the memorial, including the Rev Brian Llewellyn, priest in charge, at Ypres’ St George’s Church.

A military band played a powerful rendition of Sir Edward Elgar’s Nimrod after the laying of the wreaths. 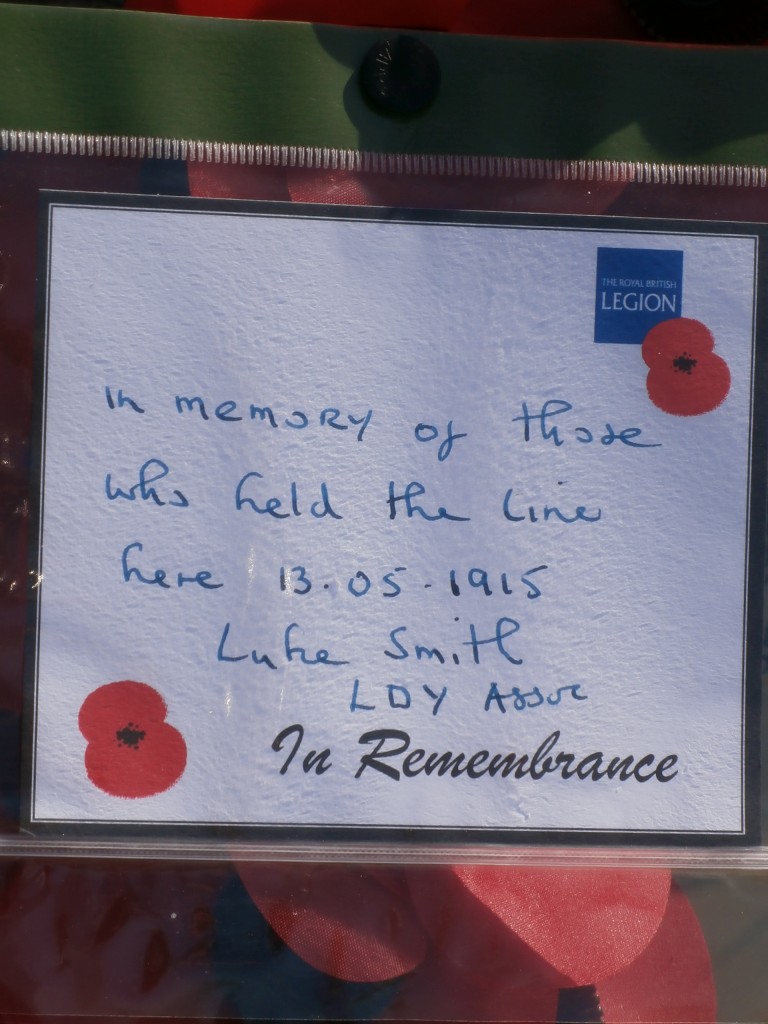 The memorial unveiling fell to Emma Williams, from Cornwall, whose great-grandfather, Major Liebert, was shot and killed as German soldiers entered the trenches.

It was something her grandmother, then aged 15, never got over, she says.

As for Albert Roe, he survived four years of war, finishing as a sergeant. Once the war was over, he came back to Leicestershire and carried on his life as a farmer.

Albert was aged in his late 60s when he adopted Tony and raised him on the farm in Saxby.

Albert was a mild man, remembers his son.

“He was quiet,” says Tony. “He was a quiet farmer.

“He apparently once said he was involved in something where all his friends died – he looked around and they’d gone.

“He was one of the few that actually got over the railway lines here. If things had happened differently, who knows where I would be.”

Tony’s here as a relative but he’s also filming for the BBC’s Inside Out programme and maybe, he says, East Midlands Today.

“I was here at the moment it was kicking off and I paid my respects and when I opened my eyes, I spotted a single poppy.” 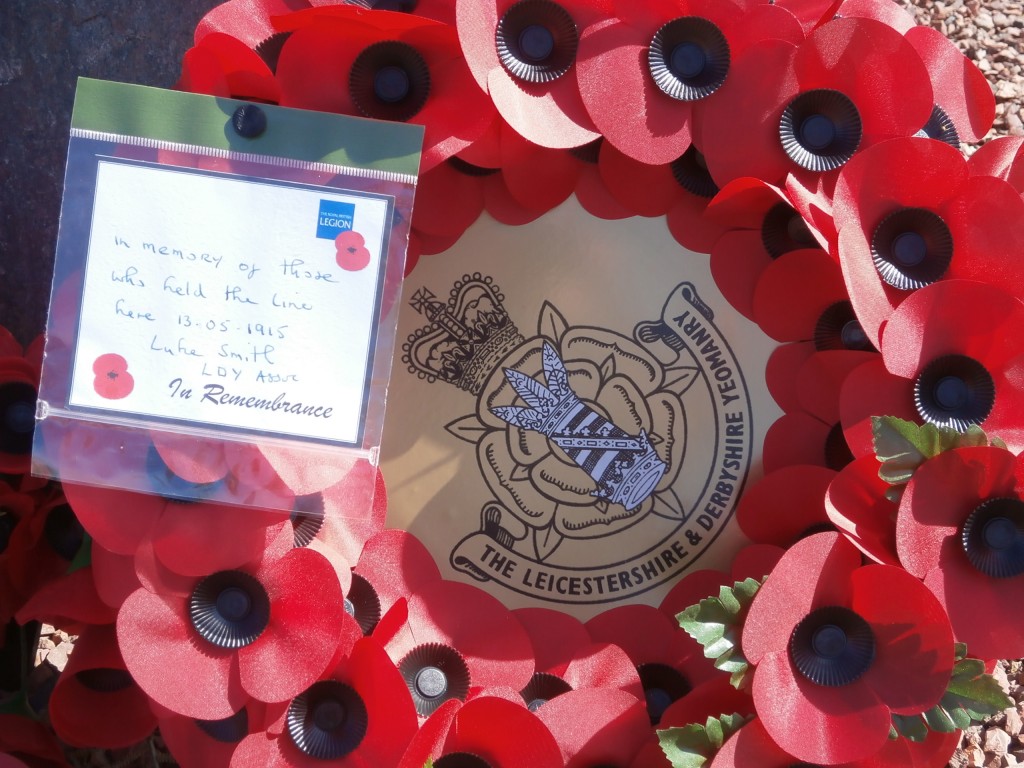 Interviews done in Ypres in May 2015. Text copyright Leicester Mercury. Photos are mine.