Stoneywell – our National Trust piece of skirt in Charnwood Forest 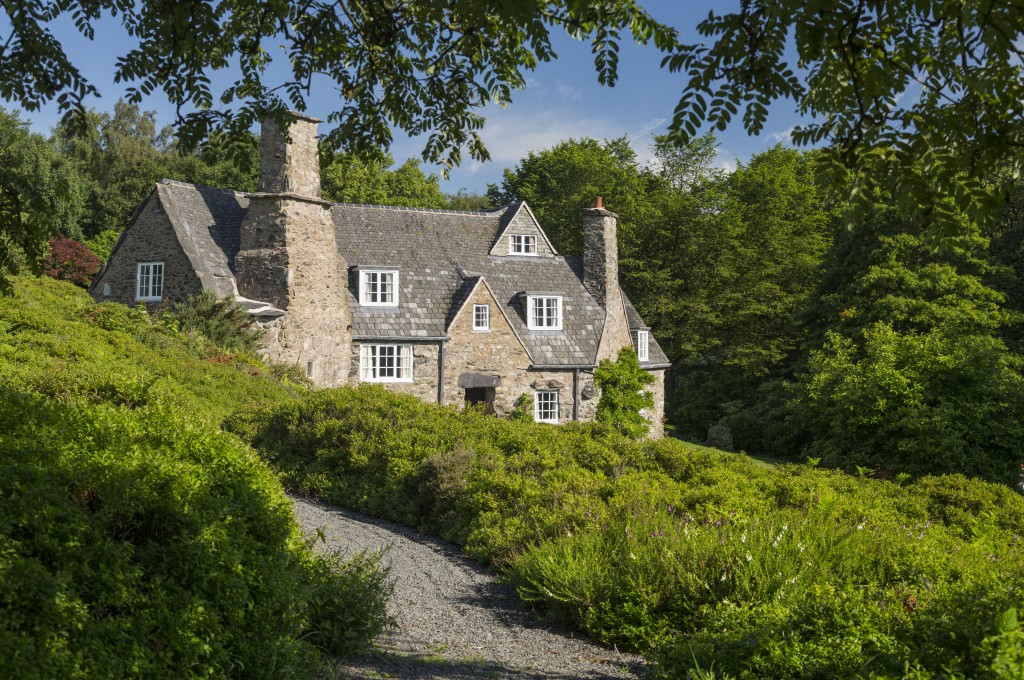 Newish among the artillery of the National Trust is an Arts and Crafts family home nestled in the scenic folds of Charnwood Forest.

“This is the postcard shot, really,” grins Joe Thompson, the head gardener, as he leads us down the proverbial garden path, past a crest of heather and bilberry grass, as a pale stone cottage comes gently into view.

“This,” Joe says proudly, “is Stoneywell.”

Stoneywell, for those who’ve missed the Mercury’s gleeful harping, was designed in 1898 by Leicester’s leading arts and crafts emissary, Ernest Gimson. The man who art scholar Nikolaus Pevsner called “the greatest of the English artist craftsmen”.

On a chilly and drizzly winter morning, the cottage with a smoking chimney greets the eye like a fat mug of hot chocolate.

Completed in 1899 as a summer getaway from industrial Leicester, Stoneywell was built in Ulverscroft for Ernest’s brother, Sydney.

Above the oak front door an enormous mantle bears the letter G and the year 1899.

Visitors coming to Stoneywell will see it preserved in its 1950s heyday, the decade when it first became a full-time family home.

Up until December 2012, the cottage belonged to Sydney’s grandson Donald Gimson.

Donald, his wife Anne and their children Sally and Roger became the first year-round Gimsons at Stoneywell in 1953.

It was Donald, a retired United Shoe engineer, who was pivotal in ensuring that Stoneywell would live on under the guiding hand of the National Trust.

“It must all be used,” Donald had exclaimed to the house’s curator, when discussions were ongoing.

To push his point home the octogenarian climbed on to the dining table and spread his arms wide – no mean feat when you’re 88. 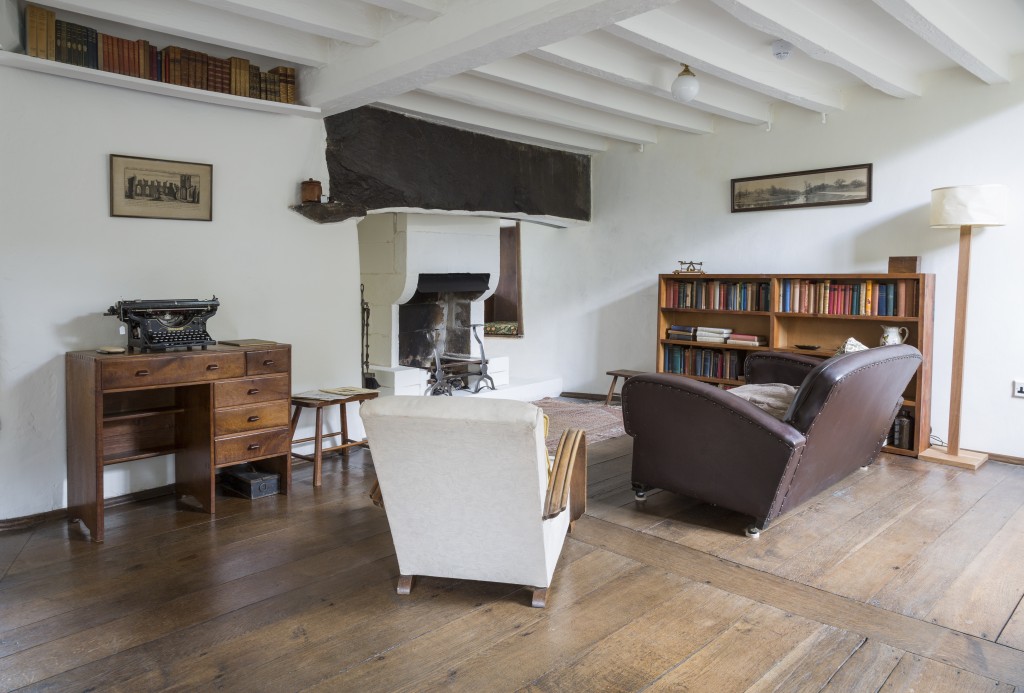 Roger Gimson grew up at Stoneywell and now lives in Bristol, as does Donald.

Sydney’s great-grandson currently has the peculiar satisfaction of knowing his family home will soon be open for visitors.

Which is exactly how it used to be, explains the retired computer engineer. “That was how it was from when the house was first built for my great-grandfather Sydney Gimson. He was very proud of the house.

“He loved having visitors right from the start. He would have groups out from Leicester and have picnics in the garden, and that’s continued all the way through.

“My parents looked after the house for 50 years and they would have groups over.

“They’d open up the gardens to support Leicestershire and Rutland Wildlife Trust.

“They would have people interested in rhododendrons – there are 200-plus varieties in the garden.

“On top of that, we would have visitors come for the architectural interest. Students would come and write their dissertations on the house.

“It’s something as a family we,” he says, “were very happy to continue.” 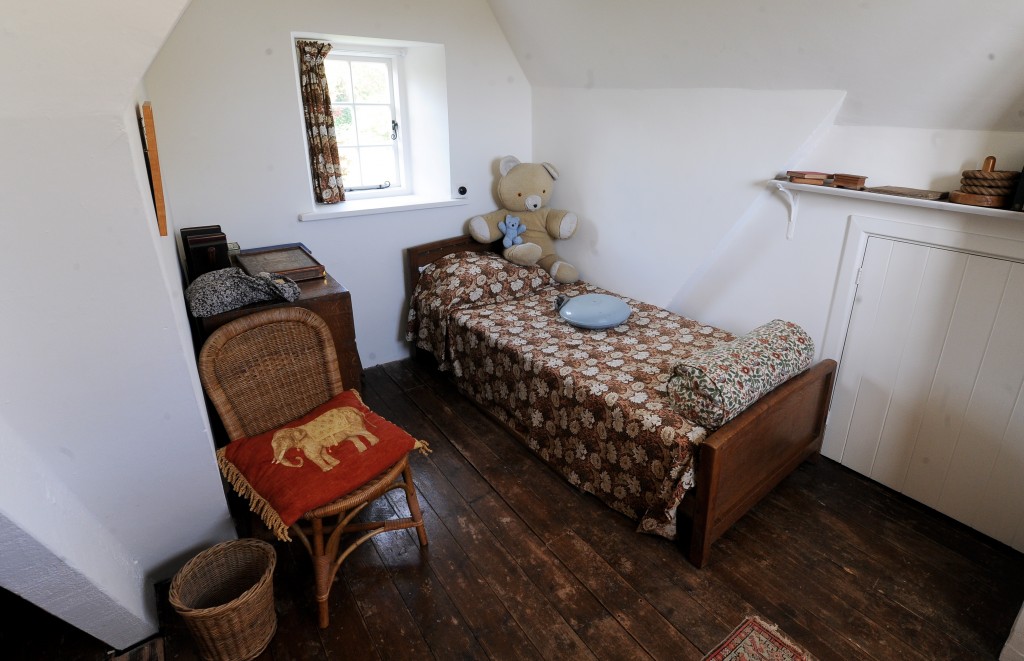 The decision to keep Stoneywell in the slow pace of the 1950s was reached after the option of turning it back to its original state – how it was at Whitsun 1899 when Sydney unlocked the door – was discounted. It would have meant re-thatching the roof, which had been replaced in 1940 with Swithland slate after a fire, and removing the bathroom and kitchen and digging up the garden.

The National Trust had two other choices.

They included leaving it as it was when Donald left in December 2012 or having it frozen in the 1950s, shortly after Donald’s family moved in.

“It was a happy and interesting time at Stoneywell,” he adds, “and has the further advantage that we’ve had to remove almost nothing in the way of fixtures, fittings and contents – except carpets and radiators.”

At Stoneywell, the open, whitewashed rooms are an interplay of shadow and light, of nooks and crannies, window seats and perilous staircases.

There are so many places calling out to you to linger a while, to pull up a chair and open a book.

“Stoneywell,” agrees Lars Tharp, has a lot to recommend it. It’s the perfect adventure house,” he says, “with its light-filled rooms, warren of twisting stairs and surprising angles.”

The Antiques Roadshow man and Leicestershire native needs no convincing of Stoneywell’s charms.

“Outside you can almost fancy the echoes of children at play, of Christopher Robin’s friends or the rustle of characters from the world of Beatrix Potter.

“I think anybody coming here will be absolutely entranced.”

Many of the cottage’s items, its chairs and tables, were designed by Ernest or by fellow arts and crafts luminaries the Barnsley brothers. 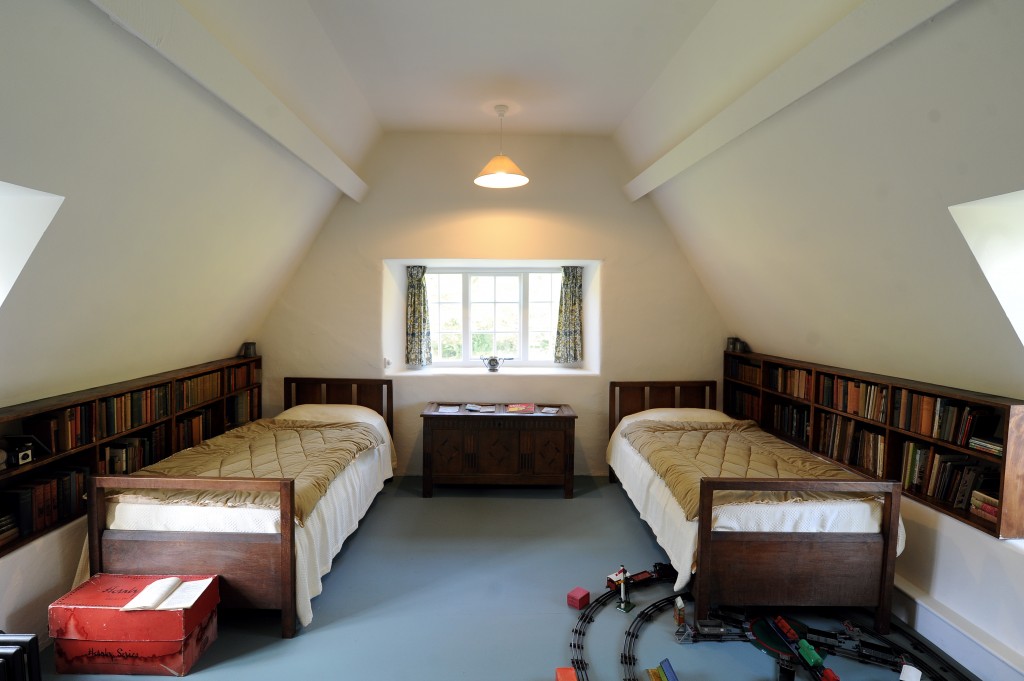 Other pieces were donated by Gimson family members. A good deal of the rest, believe it or not, came from eBay.

Some were even crafted by Stoneywell’s impressive volunteers.

Speaking of furniture, when Simon was encouraging the National Trust to take on Stoneywell, he had an ace tucked up his sleeve.

In the house’s main bedroom is a gorgeous wooden chest carved with twisting vines.

The craftsman was one Joseph Armitage – the man responsible for the National Trust’s acorns and oak leaves logo.

It’s thought Armitage and Gimson crossed paths when Armitage was teaching in Leicester. 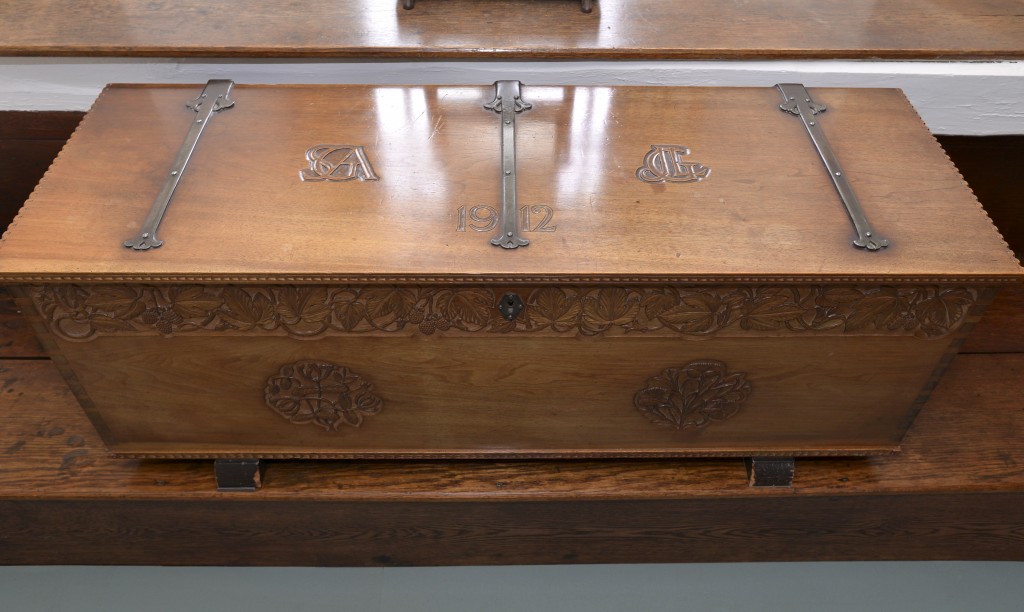 Stoneywell is an ode to a gentler way of life – those who find themselves cowed by Chatsworth House’s gratuitous wealth will welcome Stoneywell’s elegant simplicity.

That’s exactly how Ernest Gimson had planned it. Ernest was a man whose life’s work was designed as an antidote to the industrialisation of Victorian Britain.

He believed in the honesty and beauty of the craftsman’s sweat. Ikea, you’d guess, would have been his nemesis.

As such, Stoneywell combines art and function – although it never seeks to be anything more than a welcome retreat, an escape from a manufacturing town full of smoking chimneys. 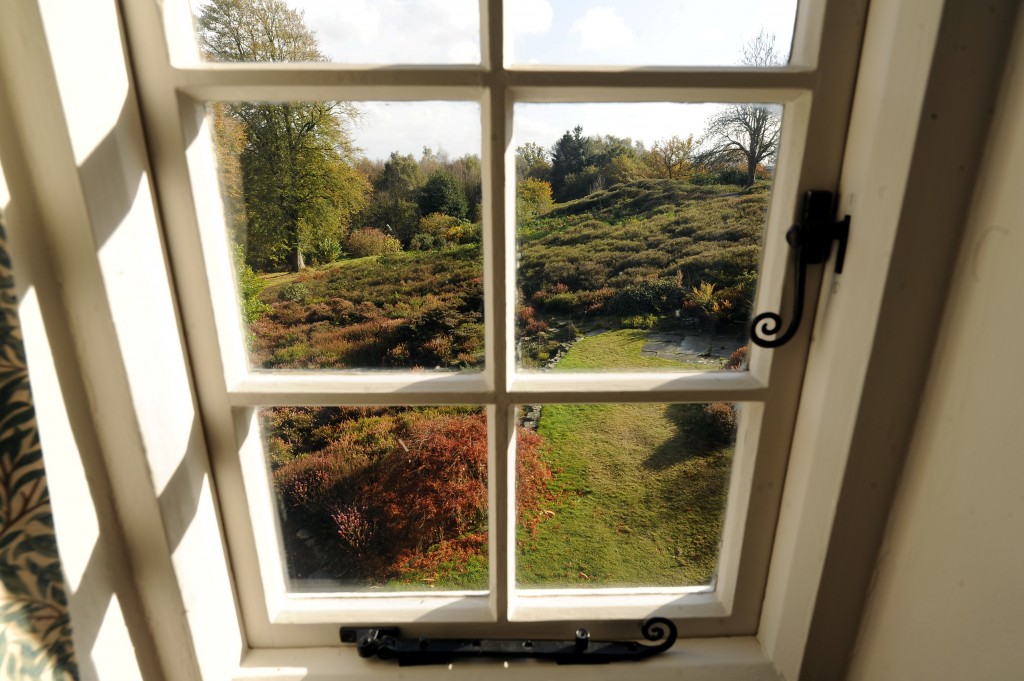 Even as a child in the 1960s, Roger remembers the house being unchanged by time.

“It was fairly Spartan – we didn’t have mains water,” he says. “We were still carrying drinking water from the well up until 1967.

“But it was a wonderful place to be,” he adds, “especially in the summer.

“As a child, having that garden to play in was absolutely tremendous.

“It was a bit more dreary in the winter – again, there wasn’t any kind of central heating until the end of the 1960s.

“We were brought up in thick jumpers and ice on the insides of windows. In the winter we would regularly get snowed in. 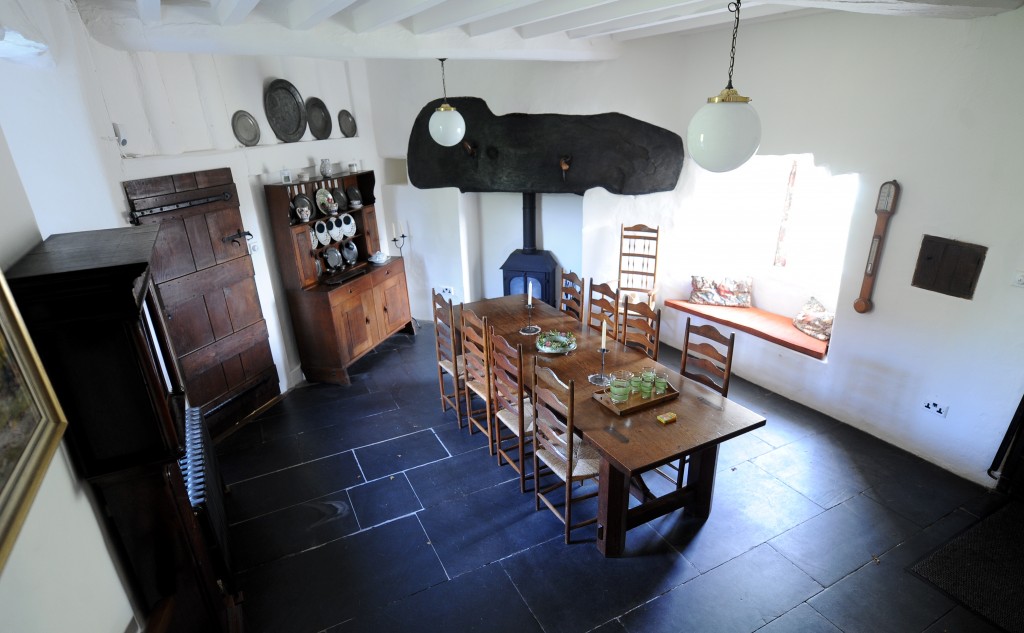 “We could never use the drive when it was snowing. It was always a matter of trudging through the snow to get to the snow plough, and then get a lift to the bus to get to school.”

For a house that looks as if it was organically birthed from the immediate trees and rocks, it’s no surprise to discover Stoneywell takes its name from Stoneywell Wood, 11 acres of medieval woodland that runs along the bottom of the garden.

The land here, stretching as far as the eye can see, once belonged to the family of Lady Jane Grey, Leicestershire’s Nine-Day Queen. The house, as you can gather from the images, isn’t massive.

It’s not a stately home with an extensive system of corridors hung with unsettling portraits which act as a caution against cousins marrying.

Due to its small stature, visitors to Stoneywell have to book. It’s the only way to get in.

Today, our party is afforded some knee-weakening views of Leicestershire.

It’s not surprising that George V, the Queen’s dad, used to stay in and around Ulverscroft when hunting with the Quorn at the turn of the 20th century.

It’s perhaps revealing, too, of how remote it is, that up until fairly recently it was one of the few pockets of the county where you couldn’t get a mobile signal.

To date, the cottage is only the county’s third entry on the National Trust’s portfolio, adding to the strangely diminutive list of Staunton Harold Church and Ulverscroft Reservoir.

Why haven’t we got more? Well, says Simon, Stoneywell’s curator, it could be a simple matter of finances, that the owners of the county’s stately homes and interesting houses, the families who have lived there, have been okay cash-wise. They didn’t need to sell. That’s one possibility.

Like most properties under the National Trust’s wing, the gardens of Stoneywell are magnificent in their own right.

Currently in a state of slumber, they’ll be emerging into life as the first paying visitors arrive in February (2015).

“In spring a lot of people know Stoneywell for the daffodils,” says Roger.

“They attract quite a number of people, you see them overlooking the wall into the garden.

“Following the daffodils, there are the bluebells,” he adds. 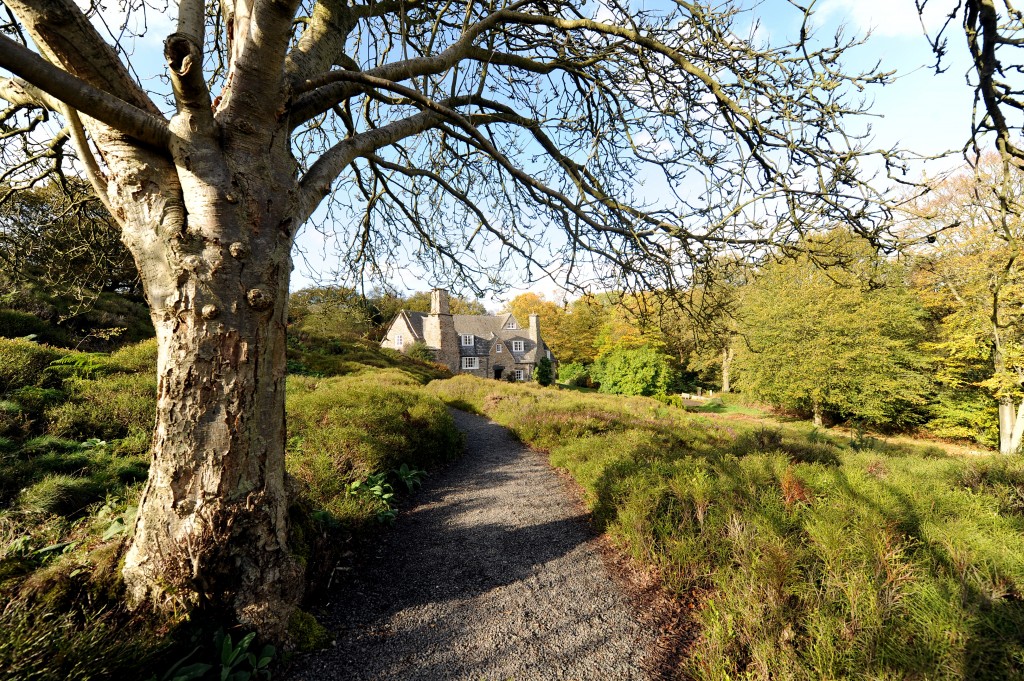 “All the way through the spring there’s colour. Straight from January, with the first of the rhododendrons, and then the azaleas take over, all the way through to late summer. The volunteers have done tremendous work in the garden,” he adds.

“The saddest thing was the garden hadn’t had the attention it needed since my mum died.

“They’ve really got to grips with it. The garden will be looking even better when the summer arrives.

“Every time of year there’s something going on,” he says, “something to look at.”

It’s been decades since Roger lived at Stoneywell. He was 18 when he left for university.

There are so many things he will always cherish about the house and it’s likely Stoneywell’s visitors will, too.

“One of the nice things about the place is that it is sort of perched in its own little ridge.

“When you’re there,” he adds, “you can almost ignore the outside world when you want to.”

And that, you’d imagine, is what two Leicester brothers were aiming for more than a century ago. 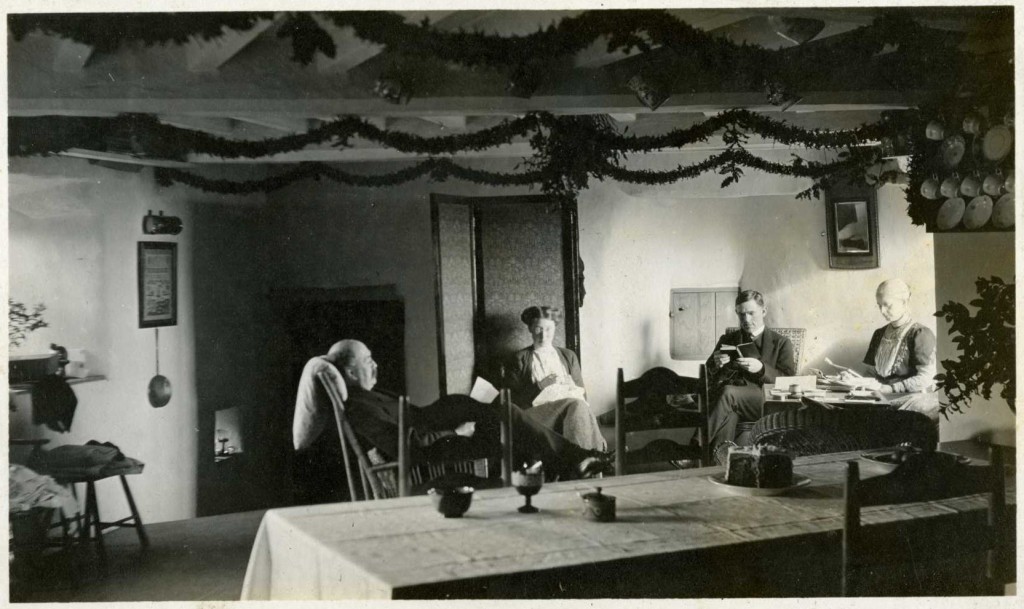 Pictures courtesy of the Leicester Mercury