Feature So you thought you’d like to go to the show, to feel the warm thrill of confusion, that space cadet glow

So you thought you’d like to go to the show, to feel the warm thrill of confusion, that space cadet glow 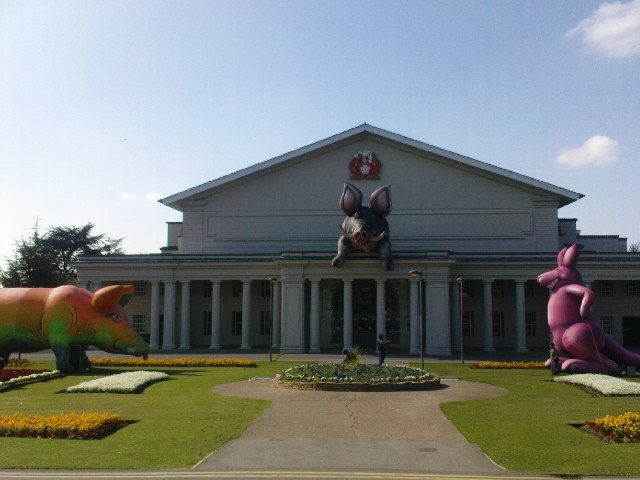 In the moth-tattered annals of De Montfort Hall, many a band have turned up, plugged in and rocked out. Yet none have executed an edge-of-your-seat show with quite the same singular panache as Pink Floyd.

Technologically advanced and technically adept, Floyd swept into the city on February 10, 1972, bringing with them eight albums of material already committed to vinyl.

But on that night the quintet brought with them two slaughter-all aces – the first was newly perfected quadrophonic sound, the second was progressive rock opus The Dark Side Of The Moon, a creative body of work which, almost four decades later, has yet to meet its peer.

Perhaps unsurprisingly, Floyd’s arrival in Leicester had gone unnoticed by the local paper. That morning, the Mercury’s front page was filled with news of strikes and electricity shortages.

It meant that some gig-goers traipsing in to De Montfort Hall that night, many dressed in the unofficial fan attire of gun-metal grey army coats and boots, perspired at the thought of the gig being rudely cut short.

The then 12-year-old (Yes, 12) was serving pre-gig drinks to the band. Later, she would stand out the front of the stage with her jaw resting on the floor.

Rick Sareen walked into the venue with his first love, Helen Koppell, the Olympic diver. Dressed, most likely in a blue velvet jacket with collar-length hair and wearing dark blue loon pants – “whatever Robert Plant wore in ’72” – he finished the ensemble with a pair of Doc Martens.

The 17-year-old was then an A-level student at Alderman Newton School. Studying the three sciences, his parents had ambitions of him becoming a doctor.

Rick, who actually became a digital advertising entrepreneur, bought his seats well in advance. The Oadby teenager paid for them by selling clumpy, ugly-looking brown platform shoes on Leicester Market.

As a huge Floyd fan, Rick recalls being a little overawed as he walked in, and then seeing giant speaker stacks at the front, in the middle and at the back of the darkened hall.

He and Helen found their seats on the ground floor, halfway back on the left hand side.

And it was then that the quad sound system started to make things a bit weird – you could hear the sound passing left to right and vice versa.

By having the speaker stacks placed at particular points around the room, it made the sound emerging from it quadrophonic – from four channels.

The effect makes sound take on a three-dimensional, wrap-around nature.

“There was the sound of a car, that was clearly a Mini, starting up,” says Rick. “It ‘drove’ around the hall and exited through the doors at the back.”

There was also the recording of a collection tray being passed around inside a church. The tinny tinkle of coins sporadically hitting a metal tray could be clearly heard.

“If you closed your eyes you would swear the plate passed in front of you.” 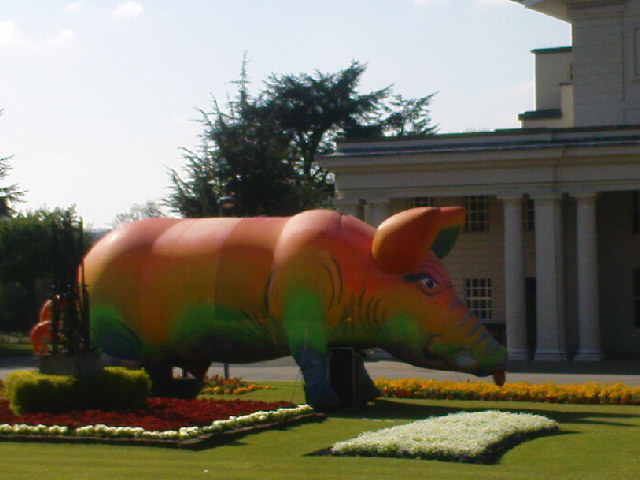 The 3D sound effects, all 30 minutes of them, had the audience in stunned silence. Each of the sounds heard – helicopters, planes, screams – related to the tracks on the soon-to-be-revealed LP: a heartbeat reflected Eclipse; the helicopter noise hinted at On The Run; the ching of a cash register and the coin collection was the song Money.

“I remember, when it started, for the first five minutes it was just a heartbeat circling around you,” says Graham Beniston, who was 18, and had travelled in from Coalville.

The long-haired teenager had got into the band 18 months earlier and was soon to pack his bags and head off to university.

He entered the auditorium, clocked two or three red hydraulic telescopic lights, rotating on the stage, with a police light on top, and sat down behind the mixing desk.

How to describe it? he ponders. “So you thought you’d like to go to the show, to feel the warm thrill of confusion, that space cadet glow,” says the telecoms manager, quoting Floyd’s The Wall.

“That’s what it felt like – it was just excitement. It was different and it was brilliant.”

On each of the hall’s school-like chairs was a crisp piece of orangey yellow Roneod paper. It read The Dark Side Of The Moon, The Hymn Sheet For Assorted Lunatics, by the Pink Floyd. This sheet of paper contained all of the album’s lyrics – Graham still has his.

Up in the gods, 25-year-old Keith Jobin, three rows from the front of the balcony, was wondering what on earth was going on.

“The first thing I remember, really, was, and I hate the phrase, that I was a bit ‘gob-smacked’. I remember thinking ‘what is this all about?’ and it carried on, and then I just sat there, letting it wash over me. When the music started… that was everything.”

Keith, who then worked at Stibbe’s knitting machine factory, off Welford Road, had got the cold shoulder from Pamela, his bride-to-be, when she learned he was going.

She was into teeny bopper stuff, such as the plaid nightmare Bay City Rollers.

Like many other females, claims Keith, [incorrectly] “she didn’t get Floyd”.

“It was so unique,” savours the retired 61-year-old, who still plays Dark Side regularly and even has it in his will that album track Breathe will be the song which plays him off to the pearly gates.

“I’m not religious,” says Keith, “but the music’s the closest I get to God.” 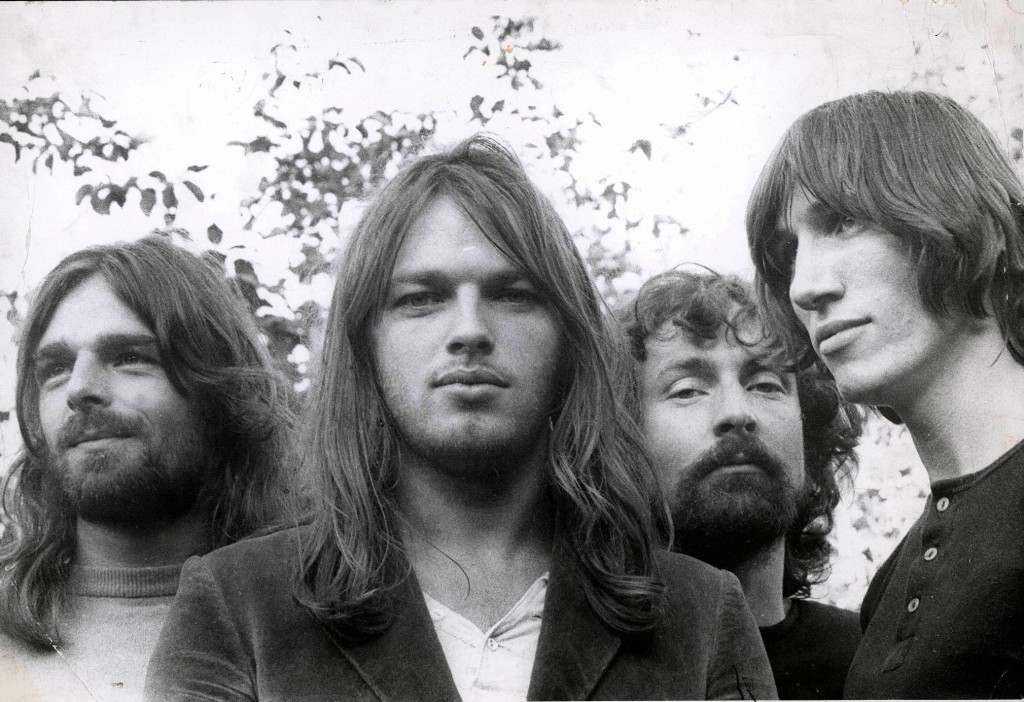 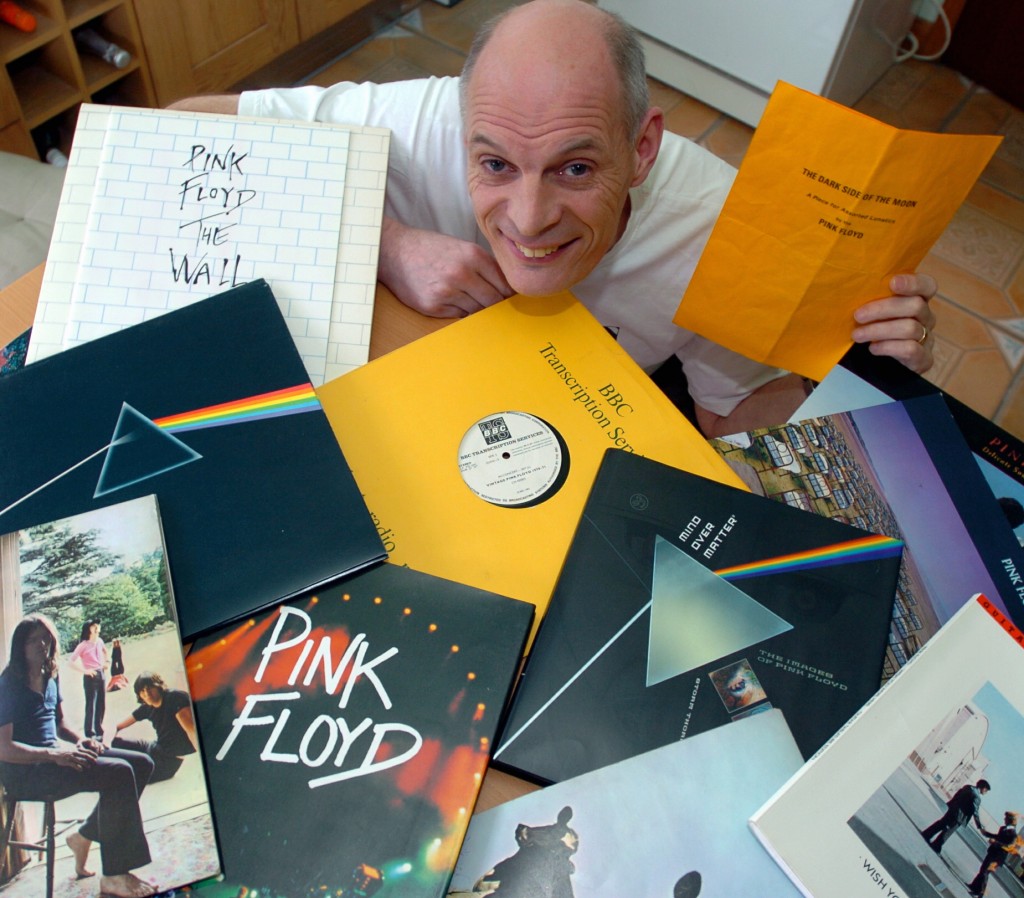 Graham Beniston with his swag – note the lyric sheet. The clever chap.

Julie Smith was 16, and from Oadby, and had gone with her mate Gaynor Chapman. Gaynor’s 19-year-old brother Steve had driven the pair in from their parents’ house, in Great Glen, in his three-wheeling Reliant Robin.

Julie, now Julie Peel, and a director of a civil engineering firm in Desford, admits she wasn’t really into the band.

“I’ve said to Gaynor that I don’t think I really appreciated the music at the time. It was my first gig. They didn’t have the following they have now.

“I’ve a terrible memory, but I clearly remember hearing the planes, helicopter and car, and remember thinking how unusual it was. I think I was absolutely overwhelmed – I’d led quite a sheltered life until then. It was quite different, shall we say.”

Rick Sareen recalls seeing a number of fans leaving the auditorium as the sound effects continued to baffle some of the old Floyd faithful.

But, then again, some people loved it.

Take New Labour’s old rocker Geoff Hoon, for example: he was thoroughly in his element outside music’s comfort zone.

Geoff, then 19, had travelled in from his parents’ home in Long Eaton, Derbyshire, with his friend Mark, who still has his Dark Side lyric sheet.

The teenager absorbed the unnerving atmosphere like a parched sponge.

“For most people, they were really experimental. They were really different. Take Ummagumma, for example (a double LP half live, half band members’ solo compositions). It was very strange to what was in the charts. I think that’s part of growing up – to like a band that not everyone really likes and, in a sense, I liked the older stuff more.

“I do remember that it was just great to be there. It was an exciting night. I can remember when the LP came out it wasn’t quite what we’d heard on the night.

“But,” he says, “you never forget the first time you see one of your favourite bands.” 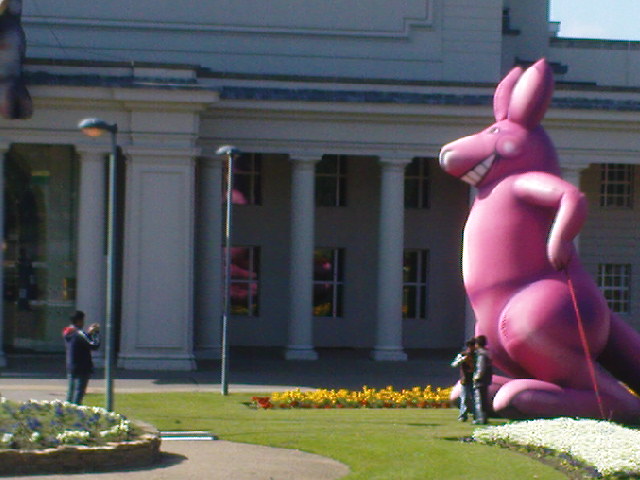 Half-an-hour later, after the sound of low drumming, a heartbeat, and, at the end, a mad female shriek (the song was called Speak To Me), 25-year-old David Gilmour, guitarist, songwriter and singer, stepped out of the gloom and up to the microphone.

It was for the first song proper, Breathe, a combination of soft dusted vocals and a pleasing chord progression.

“For long you live and high you fly, but only if you ride the tide, and balanced on the biggest wave, you race towards an early grave.”

Rob Ludlam had travelled from his parents’ home in Thurnby for the gig.

Then aged 22, he was working for a precision engineering company in the city.

Rob went with a group of friends, including his girlfriend Jean Biddles, soon to be Mrs Jean Ludlam.

Sat in the balcony, three rows from the front and on the left-hand side, his group had an enviable view of the stage.

“I remember seeing the speakers placed around the hall, and I seem to recollect that there were some which seemed to be suspended from the ceiling in the centre.

“After playing Dark Side Of The Moon, and when the audience had finished applauding, one of the band members, said: ‘Thank you for remaining quiet throughout and not clapping till the end, that’s not happened before’.”

When The Dark Side Of The Moon was released a full 13 months later, replete with Storm Thorgerson’s cover of a light-refracting prism, Graham Beniston became the first to buy the LP in Coalville, from Randle’s record shop. A few years ago, he nearly parted with £25 to buy a bootleg of the gig from a record seller in Leicester’s St Martin’s Square. He wishes he had now.

Rick Sareen recalls that he used to see loads of bands when he lived in Leicester in the seventies.

In 1970, he saw Led Zeppelin at Leicester Polytechnic – where he was one among a diminutive 200-strong audience. But nothing, he insists, ever came close to matching Floyd’s De Montfort show for intensity.

Rob Ludlam, who now works in the mechanical engineering department at Loughborough University, sums February 10, 1972, up for everybody.

“It was a fantastic night and an experience which, I suspect, lives in the memory of every ageing progressive rock fan who was there… an incredible 35 years ago.”

This is a feature I wrote for the Leicestershire Chronicle in 2007.