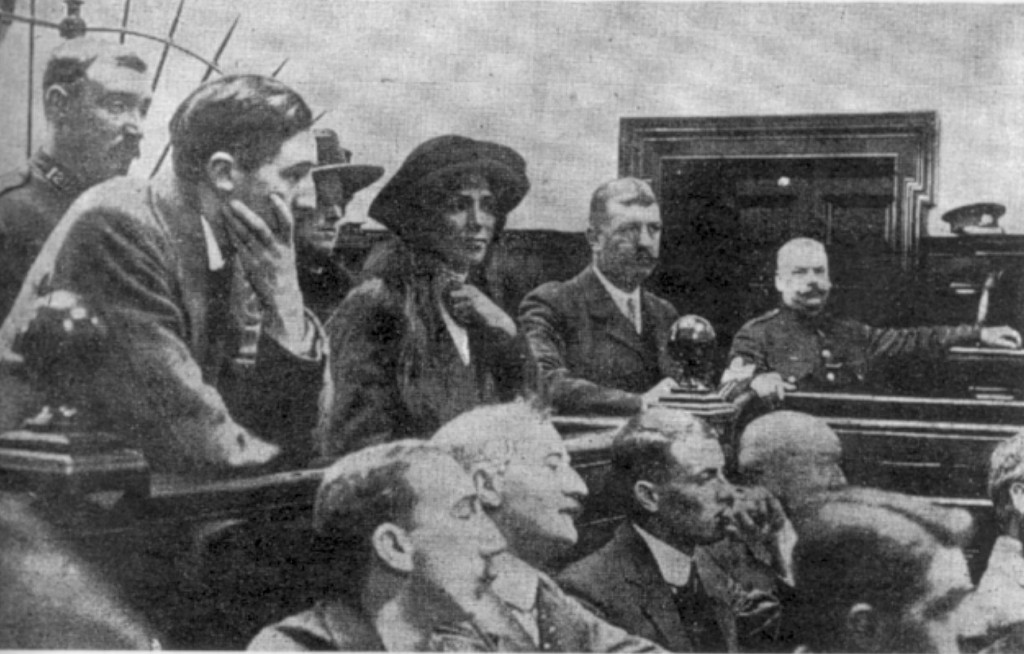 Lilian Lenton in court in Doncaster with co-accused Harry Johnson in June 1913.

Lilian Lenton’s prison photograph sits in a display case at the National Portrait Gallery in London.

The sepia image, now more than a century old, was taken covertly by police when she was among the most wanted suffragettes in England.

Chances are you’ve never heard of Lilian Ida Lenton – the Leicester dancer who became a fire-starting fugitive and who, with an impressive ability to swerve the clutches of the law, had a hand in triggering the brutal Cat and Mouse Act.

In the city, as work commences on a statue to commemorate suffragette Alice Hawkins, Lilian’s remarkable story has fallen by the wayside.

As cinemas show Suffragette, starring Meryl Streep and Helena Bonham-Carter, Lilian’s place in our social history is ripe for a spot of discovery. 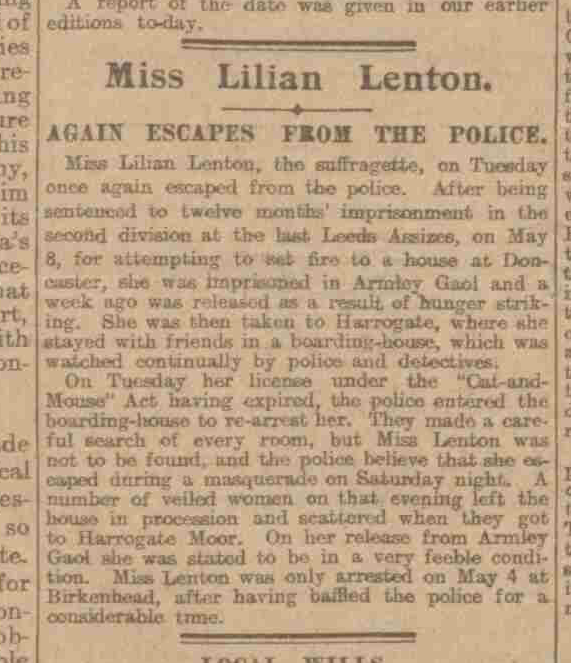 Born in 1891, the eldest of five children of a joiner carpenter (No mention of mother’s profession – and it’ s the same today), Lilian was already a paid-up member of the Women’s Social and Political Union when she saw Emmeline Pankhurst, leader of the British suffragette movement, give a life-changing address.

“I made up my mind that night as soon as I was 21 and my own boss, and that I’d got through these (dance) examinations, I would volunteer (for the cause),” Lilian said in a 1962 interview.

“Whenever I was out of prison, my objective was to burn two buildings a week.
“The object was to create an absolutely impossible condition of affairs in the country, to prove it was impossible to govern without the consent of the governed.

The sound of breaking glass, the roar of an erupting fire and the quick scuff of boots on cobbles, was her calling card.

She never hurt anyone, but she did burn a few buildings, lob a few stones and cause the establishment a few knotted stomachs.

Small crimes, really, when, a century ago, she and half the population had no say in the running of their lives, no legal claim, even, to their own children.

Decades of entreaties to improve the lot of women had fallen on deaf ears. Direct action in the form of public dissent seemed to many the only option left.

Lilian’s touchpaper was to be the winter of discontent of 1912 and 1913.
Prompted by Prime Minister Herbert Asquith’s decision to again dodge the issue of female votes in a Reform bill in February 1913, Lilian’s resolve hardened.

Having already served two months’ imprisonment for window-smashing at Whitehall in March 1912, when she gave the alias Ida Inkley, she changed overnight from stone-thrower to fire-starter.
On February 20, 1913, she and an accomplice broke into Kew Gardens, after scaling what the police had determined “an unclimbable fence”.

Once in, they set fire to the refreshment stand and burned it to the ground.

Lilian was still oily-handed when she was arrested at Paddington Station and, when she appeared at Richmond Police Court, she was remanded into custody and denied bail. In protest, she went on hunger strike at Holloway prison.

At first she made light of her two-day fast, but then, on February 23, things changed.

Tied to a chair, restrained by six wardresses and in the presence of two doctors, the prison service attempted to force-feed the 22 year old.

The rubber tube, inserted through her nose, was accidentally passed into her windpipe and the food poured straight into her left lung, causing septic pneumonia. Lilian collapsed in agony.

It was obvious she was critically ill and she was released that evening, carried on a chair to a waiting taxi and taken to a friend’s house to recover.

Letters protesting at the Government-sanctioned brutality of force-feeding began deluging the Home Office. The Home Office denied the incident.

A letter appeared in The Times, on March 18, from Sir Victor Horsley, a respected surgeon, protesting at Lilian’s treatment and the Home Office cover-up.

“The Home Secretary’s attempted denial that Miss Lenton was nearly killed by the forcible feeding is worthless,” it read. “She was tied into a chair and her head dragged backward across the back of the chair by her hair.
“The tube was forced through the nose twice… after the second introduction when the food was poured in, it caused violent choking.”

Partly because of Lilian’s near-death experience, Parliament approved the Temporary Discharge bill – the Cat and Mouse Act – on April 25, 1913.

If a suspected suffragette was released from prison on the grounds of ill health, on recovery they were rearrested and put into custody.

However, Lilian wasn’t an easy mouse to catch. On each release, despite being under surveillance, she disappeared. She became known as the elusive suffragette. 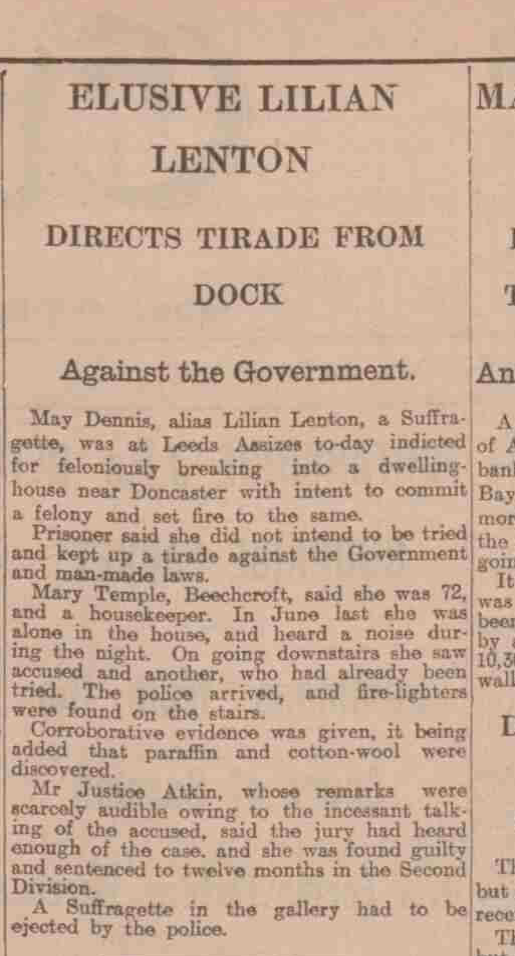 I love it that there was a noisy suffragette in the gallery.

She surfaced again in June, in Doncaster, where she had been arrested with Harry Johnson, 18, a trainee journalist. Harry was a frequent visitor to the suffragette safe house in Osborne Road where Lilian was sheltering.

The pair, armed with newspapers, a two-gallon tin of paraffin, cotton wool and firelighters, had broken into Westfield House.

Except it wasn’t as empty as it had appeared. The pair disturbed the 72-year-old housekeeper and they told her their plans, and then they left, stashing the evidence.

Police found the hoard the next morning and the name of the safe house owner, allegedly, was sat squarely atop a newspaper.

A warrant was issued for Harry’s arrest and the safe house servant, Augusta Winship, was put into custody.
The pair appeared in a packed court room at Leeds Assizes. It was then Augusta’s defence lawyer called one May Dennis to stand up.

May, AKA Lilian, took the stand and confessed it was she and not Augusta at the house. Sporadic clapping and gasps rippled from the room’s packed benches. She was asked why she had entered the house.

“To burn it,” she replied. A near-comical gasp of “Ooh!” came from the public gallery.

As a measure of Lilian’s notoriety, a photographer and reporter from the Daily Mirror were covering the case.

The Mirror’s headline on June 11, 1913 read: “Caught at last: Lilian Lenton is sent for trial.”
Harry pleaded not guilty. “I do not plead either guilty or not guilty,” said Lilian, when asked. “I do not recognise the court.” 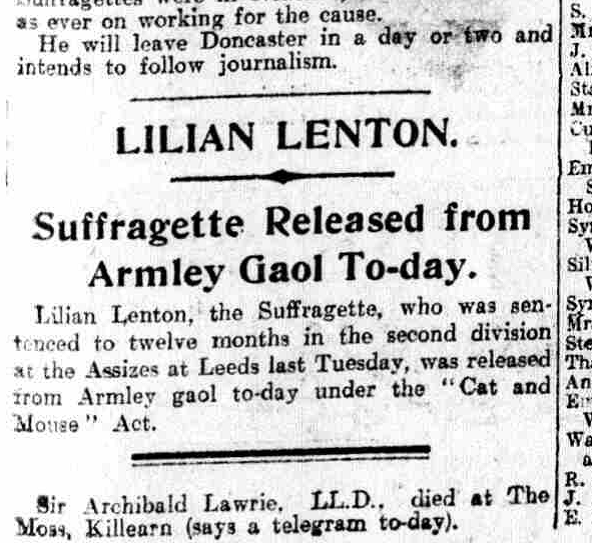 After trial at Leeds Assizes, Harry was sentenced to 12 months’ hard labour and Lilian was sent to Leeds prison to await sentence.

In the exercise yard, unbeknown to her, her photo was taken for police records.

After a week on hunger strike, however, Lilian was released on licence and later escaped house arrest disguised as a boy, reading a comic and eating an apple.

She was rearrested in October. “Miss Lilian Lenton Again In Court” was the headline in the Yorkshire Post and Leeds Intelligencer on Thursday, October 9.

“Miss Lilian Lenton, who escaped from Leeds disguised as a grocer’s boy, and was rearrested at Paddington Station on Tuesday, was again charged at the Richmond Police Court yesterday with setting fire to the tea pavilion at Kew Gardens on February 20.”
She was released again… But on November 25, Lilian failed to appear to answer the charge at the Old Bailey.
She was re-arrested in December, this time for setting fire to a mansion in Cheltenham. She was imprisoned, released and, you’ve guessed it, went missing again.
She was arrested in Birkenhead in May 1914, sent to prison and released a few days later. She promptly vanished.
Lilian’s notoriety was such that if you type her name into the British Newspaper Archive it produces almost 290 articles.
Other online sources claim Lilian was involved in the fire caused by suffragettes at Blaby Railway Station, on July 12, 1914.
That summer England was plunged into war. The suffrage movement turned its attention to the war effort.
Lilian, like so many young women, played her part. She ended up serving as a medical orderly in Serbia with the Scottish Women’s Hospital (SWH) units. Her courage and ability were recognised with a French Red Cross medal.

When peace was declared, Lilian worked for the new Save the Children Fund in Russia and later the Women’s Freedom League.
She also worked for the British Embassy in Stockholm and was financial secretary for the National Union of Women Teachers.
Lilian’s life, as you can see, was a life well lived.

But, when the Representation of the People Act 1918 saw women in Britain vote for the first time, it wasn’t the rainbow she, the suffragettes and suffragists had been hoping for.
Women over 30 could vote if they were a member or married to a member of the Local Government Register, a property owner, or a graduate voting in a university constituency.

“Personally,” said Lilian, to an interviewer in 1962, “I didn’t vote for a long time, because I hadn’t either a husband or furniture, although I was over 30.”

The women of Great Britain finally achieved equal voting rights in 1928. By then, Lilian was 37.

In 1970, as Treasurer of the Suffragette Fellowship, she unveiled a memorial in Christchurch Gardens, Westminster, dedicated to all the men and women who “had braved derision, opposition and ostracism, many enduring physical violence and suffering” to get women the vote.

Lilian died in Twickenham on October 28, 1972, aged 81. A week later her obituary in The Times described her as “The tiny, wily, elusive pimpernel.”

You hope Lilian would have approved.