History “Presently both sides were out of their trenches, shaking hands and exchanged tobacco for cigarettes and chocolate. Four of us went over and were met by six Germans.”

“Presently both sides were out of their trenches, shaking hands and exchanged tobacco for cigarettes and chocolate. Four of us went over and were met by six Germans.”

On Christmas Eve, more than a century ago, a brave officer from the 1st Leicestershire Regiment climbed out of his trench and walked steadily towards No Man’s Land.

Major Archibald Buchanan-Dunlop, who was serving on the frontline at Ypres in Belgium, hadn’t lost his mind. And he hadn’t gone accidentally striding into the murderous dark. Instead he walked with purpose, singing a Christmas carol.

A battalion to the left of where the 1st Leicesters were dug in, had already abandoned their trenches and the officer, surveying the scene, took the opportunity to join in and permitted his men to follow.

Leicestershire’s young infantry, some of whom were understandably skittish given the situation, followed behind him and joined their voices with his.

A day earlier walking towards the wire meant a quick death. Now, soldiers in muddied shades of grey and khaki, were abandoning their shelters and meeting face to face.

The soldiers, alike in features, though different in accents and uniform, exchanged tokens, chocolate and cigarettes. Some of the men temporarily escaped the weight of war with a game of football.

Archibald went out holding his old school’s Christmas carol programme his mother had sent to him. It came from the Loretto School in Edinburgh, where he’d been a pupil and a teacher.

In a letter to his wife, the Scottish officer had described the troops they faced to the right and centre of No Man’s Land. He thought they were Prussian and “very vicious”. On the left, he said, they appeared to be Saxon.

“Jolly cheering men for the most part,” he said, “and so it seems silly in the circumstances to be fighting them.”

On December 27, 2014, he wrote another all together more interesting letter.

“Such a curious situation has arisen on our left. The Germans all today have been out of their trenches and had tea with our men halfway between the trenches. They only fire four shots a day. Our men were rather non-plussed (owing to the friendly relations between the two parties) and they couldn’t very well take them prisoner. Two of their officers and seventy men even came into our trenches, refusing to return to their own trenches. They insist on staying.” How that issue was resolved we don’t know, but the wheels of war turned for another four years.

The story of the singing major got back to England and the Daily Sketch on January 6, 1915, put a picture of him on their front page. They described him as a leader of the Christmas truce – which wasn’t quite true, as there were lots of truces and most were instigated by the soldiers.

The Germans, it’s worth mentioning, appear to have inspired the majority of them. In some areas along the fighting line, the soldiers believed a truce had been called when it hadn’t. These men, emerging from their dugouts, their hearts light with joy, paid a heavy price. Dozens of British and German troops died on Christmas Day 1914.

Regardless of who did what, soon after the truce Archibald became commanding officer of the 1st Leicestershire Regiment. In Christmas 2014 a stained glass window in his honour was unveiled in the chapel of Archibald’s old school in Edinburgh. 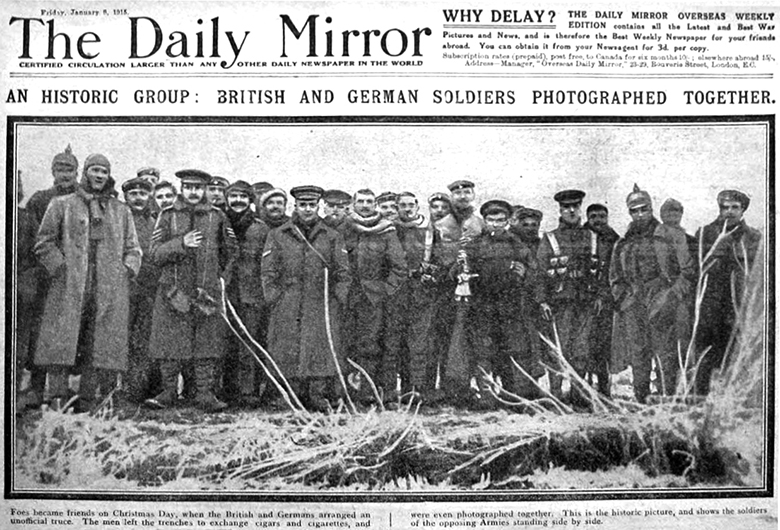 This was far from the only Christmas spirit experienced by our boys from Leicester and Leicestershire.

Also in 1914, Private F Cooper had let his eyes drift across the deathly black of No Man’s Land, before they came to rest on the glowing Christmas lanterns the Germans had strewn along their dugouts.

“On Christmas Eve the distance between our trenches and the German trenches was 200 yards,” he said in a letter to his parents in Leicester. “The enemy had lighted up their trenches with Christmas lanterns, and both sides were singing carols. “One of our fellows shouted to them, “Why the …. don’t you take a tip, and chuck it?’ and they shouted back, “Come over to see us.”

“This was not an official armistice, but an understanding between the two parties concerned…On our right and left our guns were playing – with the enemy. The Germans who met us were mere schoolboys. To tell you the truth, I would have a scrap with six of the b……. Their officers told them the war will be over in three weeks,” he added, “in fact they wished the whole show was over.”

The spirit of peace and reconciliation, however, had failed to warm the heart of Private Cooper.

“These fellows are not to be trusted,” he concluded, “and we think there is something behind this supposed friendship.”

On Christmas Day and New Year’s Eve 1914, Private John Lowe was with the 1st Leicestershire Regiment in the small village of Bois-Grenier in northern France.

“The Germans were quite friends with us on those two days,” he shares in a letter to a friend.

“They left their trenches and came over to our officers and shook hands with them as they came along the railway line, but we did not allow them in our trenches. It seemed a shame to start fighting them again after giving us cigars and cigarettes.”

John’s letter was dated January 12, 1915. John was in billets at the time, but going back to the trenches that were “up to the knees in mud and water” by the end of the week.

Only a few months earlier, back on October 26th, the Allied and German troops had been fighting hand to hand across Bois-Grenier’s railway line, with heavy losses on both sides.

The letter, sent when the regiment was with the 6th Division of the British Expeditionary Force in France, was published in the Leicester Chronicle of January 23, 1915.

And if you thought that was heart warming, the best is left for last.

Somewhere amid the Christmas battlefield mud of Neuve Chapelle, we find Captain Chudleigh of the 2nd Leicestershire Regiment.

We interrupt him peering through the loophole of his parapet into the parapet of the opposing enemy trench.

Incredibly, he can see men moving freely about – an open shot for any chancing rifleman. What he didn’t know is that he was looking at his men – Leicestershire soldiers. Who had been over in the German trenches exchanging trophies and eating Christmas dinner.

As the revelries continued, Chudleigh’s sergeant major had reported an unusual number of men missing.

When two of his reliable old soldiers returned they explained they and others had enjoyed Christmas dinner beneath a long covered part of a German trench.

Earlier attempts to leave had proved futile. The German soldiers had repeatedly urged them to stay and when they politely declined “dragged them bodily into the trench by their legs”.

Their enforced meal had apparently been excellent “far better than Maconochie’s menu”. It was interrupted only by a German orderly – a man who had been a waiter in Leicester before the war – who ceremoniously presented them with a bottle of French wine, a gift from the German officer to the English captain. Our excitable county boys had not understood the gesture, so they “begged pardon” to the captain. They’d drunk the bottle of wine themselves.

High command, however, was not amused at knowing our boys were not killing or being killed by the Germans. A few hours later a terse message arrived from regimental headquarters.

“All fraternisation with the enemy is to cease immediately. Any further action of this sort will be dealt with severely.”

Dolefully, the captain returned to his “funk hole, lit the stump of a candle and wrote a letter home from which these notes are taken”.

The Christmas Day truces of 1914 had a humbling effect on most men.

Private JW Price of Ashby, who was with the 21st Field Ambulance, was among them.

“I must say I have experienced what I shall never forget,” he said in a letter home to his family.

“We had a concert in our old barn, at which our officer took the chair. And to complete our joy there was not a shot fired on our part of the line.

“The men made an armistice, and they got out of the trenches and met each other halfway, shook hands, exchanged cigarettes, cigars and souvenirs. It can’t seem real after the vicious fighting but I saw it for myself and I got a piece of shell from one of the Germans.”

Corporal George Gogerty of the Royal Field Artillery was an old boy of Leicester’s Bridge Road School. The school, which no longer exists, lost 133 pupils during the conflict.

George in a letter to Mr Baddeley, his old headmaster, reported scenes of festive harmony.

“Christmas Day passed off very quiet; in fact there wasn’t a shot fired. There was a kind of truce between friend and foe on that day. The infantry in front of us were exchanging visits, also tobacco and cigarettes. I believe that both sides were very friendly disposed towards each other.

“In one case I heard that the Germans wished to play football match between the barbed wire fences, the teams to consist of eleven of a Scottish regiment and eleven Germans.”

“The colonel of the Scots,” said George, “wouldn’t hear of it.”

In January 1915, a train carrying 133 wounded soldiers arrived at Leicester Midland Railway station and taken to recuperate at the 5th Northern General Hospital, now part of the University of Leicester campus.

A reporter from the Leicestershire Mercury was there waiting with a pencil and a notebook.

“They were not inclined to give any glowing accounts of the glorious scenes of war. The general view of it was that it was literally a very dirty business “Up to our necks in mud” as one of them put it.

“Practically all of the men confirmed the statement that there was a break in the hostilities on Xmas Day, and most of them had either witnessed or taken part in something which might almost be described as fraternising between the foes on that day.

“They wanted to play us at football,” said one man from his stretcher, “but the officers wouldn’t have it.”

There is mention of a football kickabout in the article. The Germans won 3-2.

Some images borrowed, ahem, from the Sainsbury’s advert.