And this is how it happened. Me and a colleague had been working in London. Going up in the lift at St Pancras, to get to the East Midlands train platform, there was a young woman, from Leicester, on her phone. “It’s busy already is it at Vicky Park? What, heaving? Jesus.”

The train stops at Market Harborough. Dozens of blue City shirts climb aboard. The buzz is definitely on.

And then we get off the train at Leicester. We are shown to the opposite end of the platform to where you would normally exit, a sea of people in blue and white climb the steps over the tracks – even me and Jenny who were subconsciously showing our colours (We were both dressed in blue) – and we take a quick shuffle out onto Granby Street and see this, the scene before three coaches churn past in a surging sea of grinning faces. 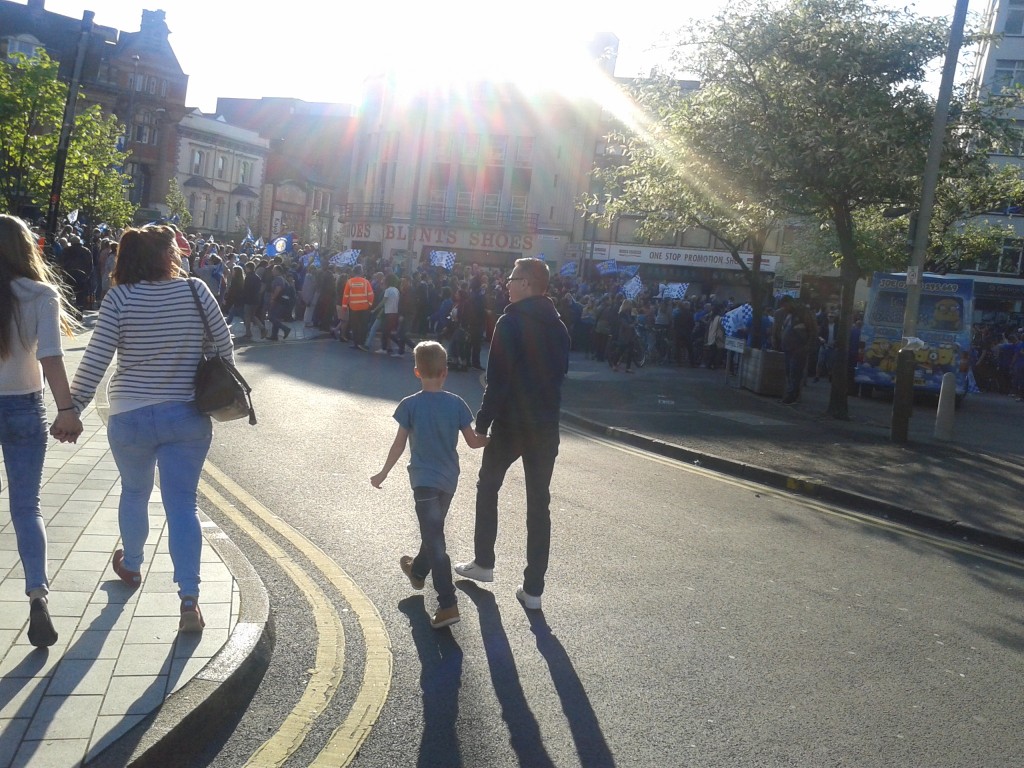 Everyone heads to Vicky Park. We disappear up to New Walk so Jenny can go back to the office. While there we decide to take a breather at The King’s Head.

Before Jenny and I walked in we were stopped by a pair of Eastern European men. “You like?” said one, kindly offering me a swig from a bottle of white wine, which was politely turned down. We were wondering what Vicky Park was looking like – and this came up on the screen. And then, meeting a few friendly people who’d travelled in from Broughton Astley, one a former member of Chrome Molly, an old Leicester rock band, I headed up to Vicky Park. Jenny, seeing a chance to beat the traffic, legged it. The strangers I met, who are also Download fans, then started plying me with booze. I am 40 years old and know better. As you can see, we were right at the front. These were the guys I’d met from Broughton Astley. They were fun. They danced joyfully and erratically to Kasabian. They shared their beer. It was a lovely day. And this is what I saw on the walk home…