Heard the one about the vilified king, the long-lost Leicester pub and the bed secretly stuffed with regal riches? It’s an ancient murder-mystery with a plot which takes in avarice, ambition and execution and boasts a cast led by one of the nation’s most notorious monarchs.

Our story begins on the evening of Sunday, August 21, 1485, with the arrival of Richard III in Leicester, in preparation for the fight for his kingdom.

Richard takes the largest room at The White Boar Inn, on the corner of the High Cross, Leicester’s medieval high street. Several poor lackeys get the job of unloading the wagons and lugging the king’s four-poster upstairs.

Why did he choose the White Boar? Well Leicester Castle, much as it is now, was unfit to hold the royal personage at short notice. And perhaps ol’ Dick thought his lodgings were a lucky omen – the white boar was his personal emblem.

On Monday, August 22, 1485, Richard has a pressing appointment with destiny. The Battle of Bosworth is fought for two hours, 13 miles away, in the vicinity of Upton, south west Leicestershire.

Henry, the Earl of Richmond, with the help of 2,000 recently released French jailbirds, defeats the king and heads back to Leicester wearing Richard’s crown. Henry VII, brings Richard’s naked and hacked body back to the town, slung over the back of a horse.

This ghoulish procession clip-clops through the Magazine gateway and into the religious enclosure of The Newarke. Richard’s body is then laid out for two days in the Collegiate Church of the Annunciation of St Mary.

With the arrival of the new king, the innkeeper at The White Boar, it is alleged, quickly repaints and renames his gaff, cannily changing it to The Blue Boar Inn – the blue boar being the emblem of Henry VII.

And while the pub passes from tenant to tenant, King Richard’s bed, if you can believe it, stays put.

A century elapses and by late Elizabethan times – the 1590s – Thomas Clarke is the Blue Boar’s landlord and brewer. 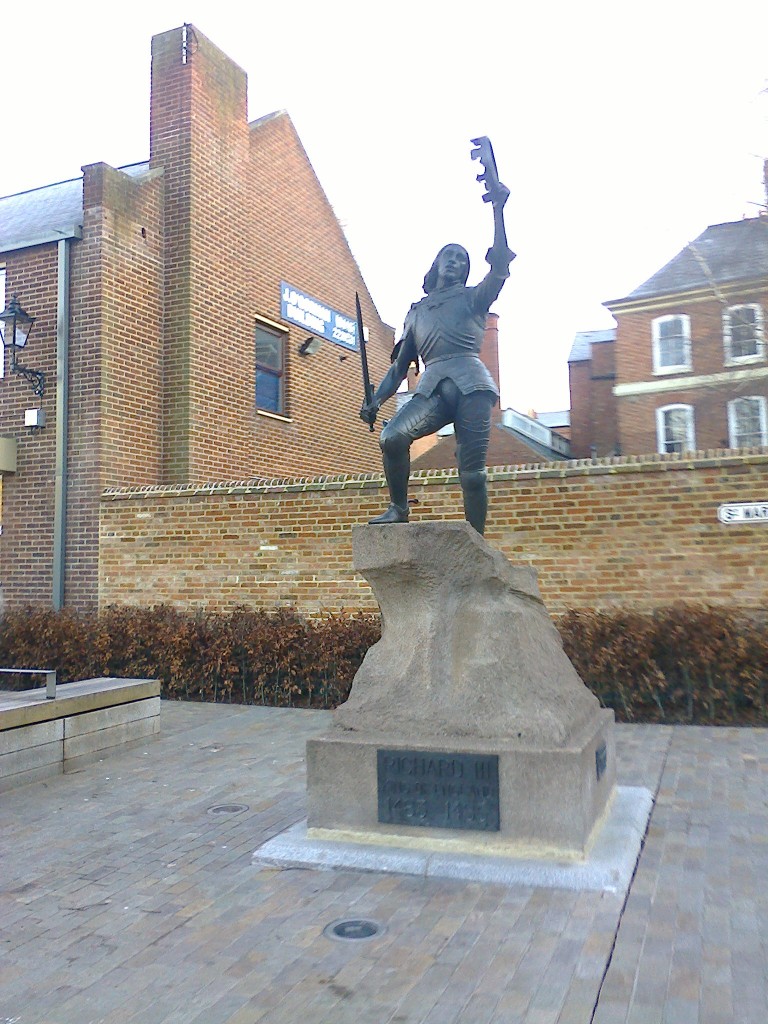 He’s a shrewd, illiterate chap who, in a municipal career spanning 35 years, becomes meat tester, leather tester, borough chamberlain, collector of subsidy, surveyor of town lands, coroner and alderman. He’s mayor in 1583-4 and again in 1598-9. On a 1590 Subsidy Roll only four other Leicestrians are wealthier.

Thomas shuffles off this mortal coil on Tuesday, June 28, 1603. And this is where it gets really interesting.

Agnes Clarke, his widow, runs the pub alone, but on Sunday, February 3, 1604, is murdered after letting in three lodgers.

The trial is held at the Spring Assizes on March 25, 1605. Soon after, an Edward Bradshaw is executed and Blue Boar maidservant Alice Grimbold is burned at the stake. 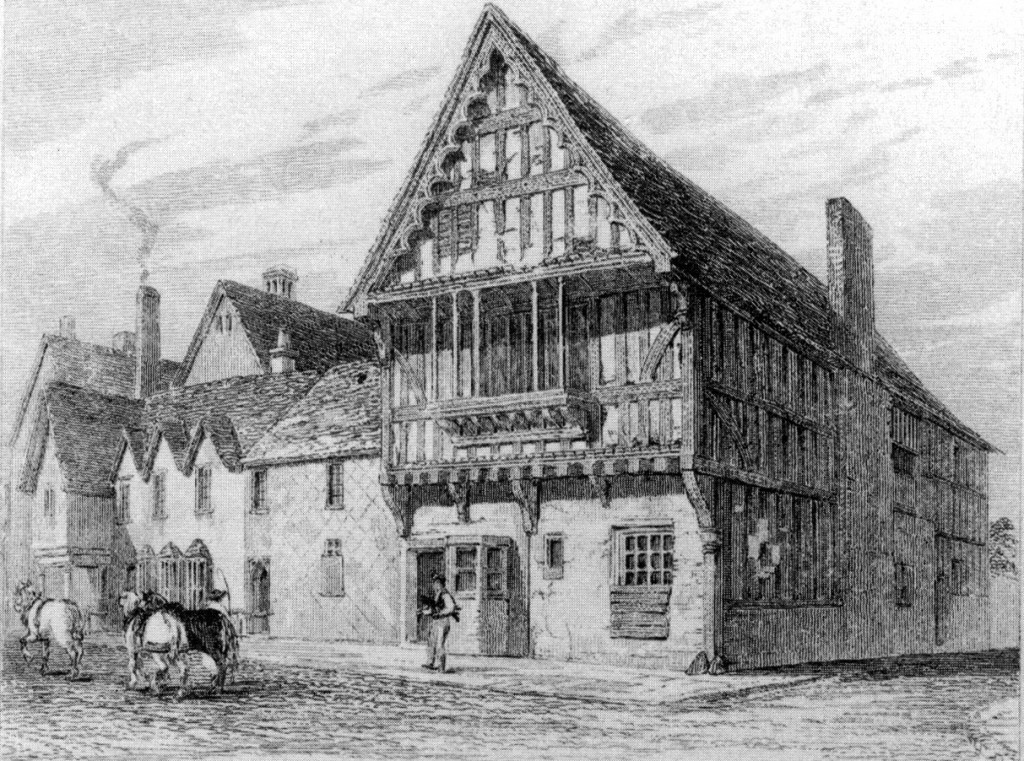 It’s here, post-trial, that the legend of the king’s bedstead, with its hidden treasure, emerges as the reason for Mrs Clarke’s murder.

The story has it that as Agnes is cleaning the bed one day a gold sovereign drops on to the floor. On closer inspection, she discovers a stash of gold coins hidden inside the bed’s base.

Rumours of the Clarkes’ new-found wealth circulate and, eventually, they come to the ears of her eventual killers.

It’s a cracking tale, whether it’s true or not, but the link between the bed and the murder is first recorded in the 1650s, in Sir Roger Twysden’s Commonplace Book. He had it, says 18th century Leicester historian John Throsby, “from persons of undoubted credit, who were not only inhabitants of Leicester but saw the murderers executed”.

Even before Sir Roger dipped his quill, there’s a rhyme mentioning the royal bed in the popular penny sights of England, published in Tom Coryat’s Crudities in 1611: “Drake’s ship at Deptford, King Richard’s bedsted i’ Leyster, The White Hall whale bones, the silver bason i’ Chester.”

So the Blue Boar had become one of England’s early tourist traps. When author and artist Samuel Ireland visited Leicester in 1790, he made inquiries about the “two curious remains” for which the town was famous, “the house and bed in which Richard III slept the night before the Battle of Bosworth, or rather Sutton Field.”

While in town, Ireland had a mooch around The Blue Boar and declared it “in good preservation”. “The room in which the king slept is so spacious as to cover the whole premises.”

This storied pub had enough significance, you would have thought, to safeguard it from demolition. Alas, no. It succumbed to “progress” in 1836.

In his Handbook of Leicester, published eight years later, historian James Thompson writes: “The Blue Boar was taken down a few years since by a speculating builder to erect some modern houses.

“Whilst its previous owner (Miss Simons, a lady of the old school) was alive, it was preserved from the hand of the destroyer, but on her death no-one was found to rescue this relic of national interest.”

As for the bed, that had already gone. By the end of the 18th century it belonged to Thomas Babington, of Rothley Temple, a gift from the Rev Matthew Drake Babington, a former mayor.

In 1831, it was owned by Professor Churchill Babington, who offered it for £100 to the Corporation of Leicester. It declined and the bed went to W Perry Herrick Esq, of Beaumanor Hall.

At least, that’s what some say. What’s long been known as King Dick’s Bed has been in situ since the mid-1970s, says Richard Knox, keeper of the manor house and Bosworth Battlefield, run by Leicestershire County Council.

“King Dick’s Bed gets a smirk, if nothing else, from people with a puerile sense of humour,” notes Richard.

“Or there’s another common reaction – “Wow, what a beautiful bed!” – and they look at the bed, look at me, and they’ll say “do you think it really is the same bed?” And, does he?

“The very, very bottom of the bed, the initial oak frame with the ropes running through it, it’s possible that it’s that old.

“But there are little posts running from the bottom of the structure, which are late Elizabethan or early Jacobean.”

But Richard believes even before you throw in a king, a king’s treasure and a murder, the antique furniture happily holds its own.

“It’s interesting in its own right, without it being embellished,” he says.

Donington le Heath Manor House will be reopening to the public in May 2016.