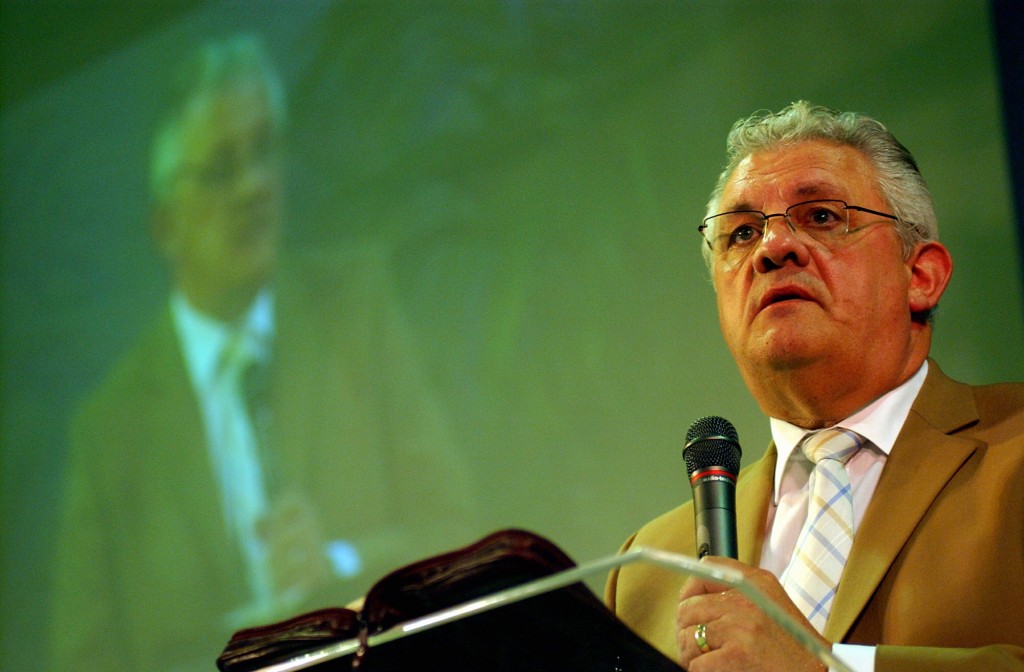 It’s 7.30pm on a Friday at Leicester’s All Nations Hall and almost 600 people are standing shoulder to shoulder to witness the healing power of the reverends David Carr and Richard Taylor.

Tonight’s Free American Methodist service in Frog Island has drawn people from all parts of the city, from all backgrounds and cultures. A number of the crowd are in wheelchairs or using walking sticks.

The atmosphere is emotionally charged: people are singing, dancing and raising their arms in praise. It’s a bit like standing on a football terrace but, all around, Jesus’s name is cried out in exultation and not, for once, in frustration.

I’m here among the believers to see a miracle or two. The wait isn’t long.

“Is there a Mrs Soni in the audience?” asks Rev Richard, bringing an Asian woman in her early 60s shuffling to the stage.

Mrs Soni was here the night before, he explains, when Rev Dave placed his healing hands on her.

“I have really bad rheumatoid arthritis,” she tells the audience.

“I’ve been treated for it for the past six to seven years. Nothing was working. I read about this in the Leicester Mercury and I thought this was my last chance.

“When Pastor Dave laid his hands on me I felt great warmth through my body, and all of a sudden, so relaxed. I slept last night for the first time in five years without any pain.”

There is a chorus of “praise be” and “Hallelujah.”

“If you come to God tonight, you’ve got to be prepared to walk away from your past,” he adds. “It’s not what you used to be, it’s what you can be.” 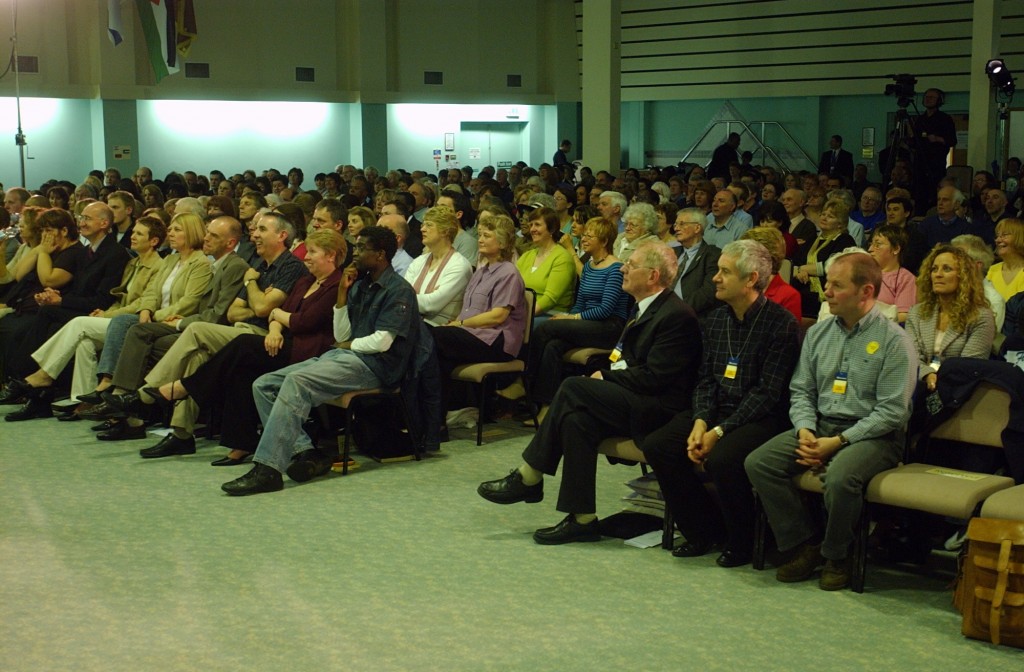 Rev Richard, as he calls himself, knows all about that. He was once in prison and addicted to drugs.

Reverend Dave is 60, from Birmingham, and a silver-haired former footballers’ agent.

Both are amiable and chatty, both have a southern American twang when they bring home the service’s most salient points: “Je-ee-suss, you are the alph-uh and omeg-uh, you are the beginning and the end.”

It’s worship mixed with theatre, but there aren’t any repeated pleas for the congregation to dip into their pockets in the name of the Lord.

As Rev Dave says: “The message Jesus has given us is free.”

Later, he mentions that CDs and books are for sale in the foyer.

The evening’s highlight is the anointing and laying on of hands by both men. 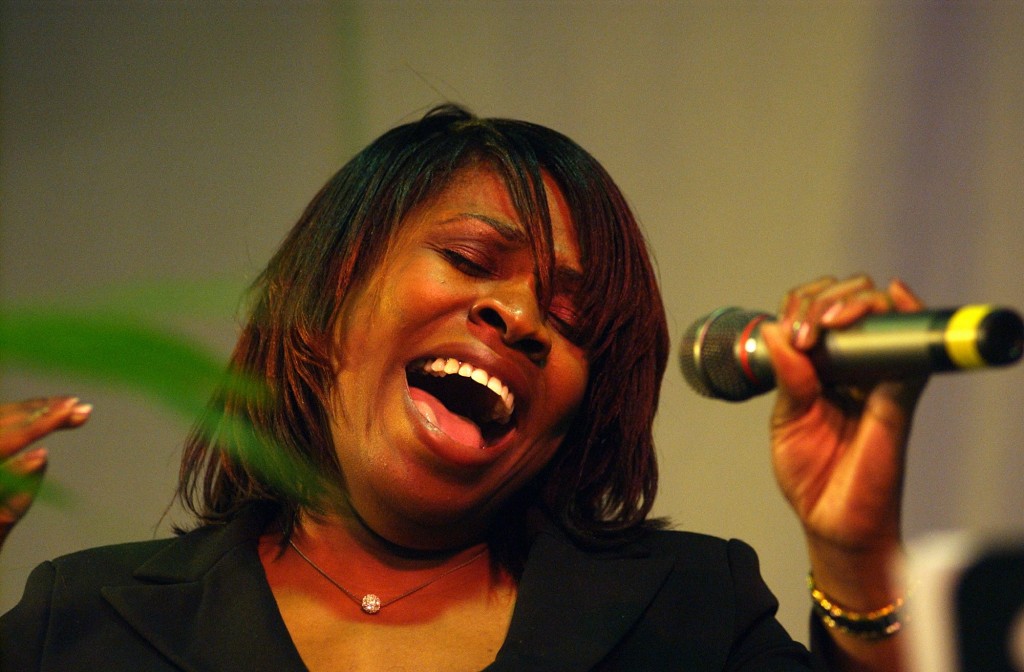 Soloist Claudette Schlitter sings at the All Nations Centre in Leicester

One by one, people approach the stage, and one by one, they topple back like giant dominoes. At one point, I count 14 people down.

It’s a minor miracle they avoid being trodden on.

For almost an hour, there is a queue of people waiting to be freed from sickness and disease. It is truly humbling to watch them approach the stage. Clearly, some here are very ill.

The two reverends are taking people in turn, anointing them with oil and shouting for Jesus.

From tonight’s healing, the preachers hear two success stories the next day.

Firstly, an eight-year-old girl with diabetes who came with her parents found her blood sugar levels were a lot lower than they normally were.

Also, an elderly lady with arthritic legs told the pastors when she returned on Saturday that she could now “do the Can-Can”.

Rev Taylor was healed of chronic neck and arm pain by a casual handshake from Rev Dave in March, 2003.

Unsurprisingly, he is keen for people to learn about the Healing Mission, and about the weekly Ministry of Power services at Solihull’s Renewal Christian Centre.

After tonight’s performance, both pastors are left dripping with sweat and retire to a room for a spot of recuperation.

“I believe Christians should be in the real world,” says perspiring Rev Dave, dipping strawberries into a bowl of sugar and eating them.

“I feel sometimes a real sense of walking on air when I’m healing. I can sense the presence of God, that I just know something incredible is going to happen.

“I receive power when the Holy Spirit comes upon me.”

Dave was 25 when he had his Pentecostal charismatic experience and “felt one with the Holy Spirit”.

On at least 10 occasions, he says, he has spoken in tongues. he lists Cantonese, Japanese, Italian, Mandarin, Swahili and native American.

“It can’t be explained,” he says Dave. “When you’ve got compassion in you, you’re drawing from his strength.”