Inside Old John at Bradgate Park 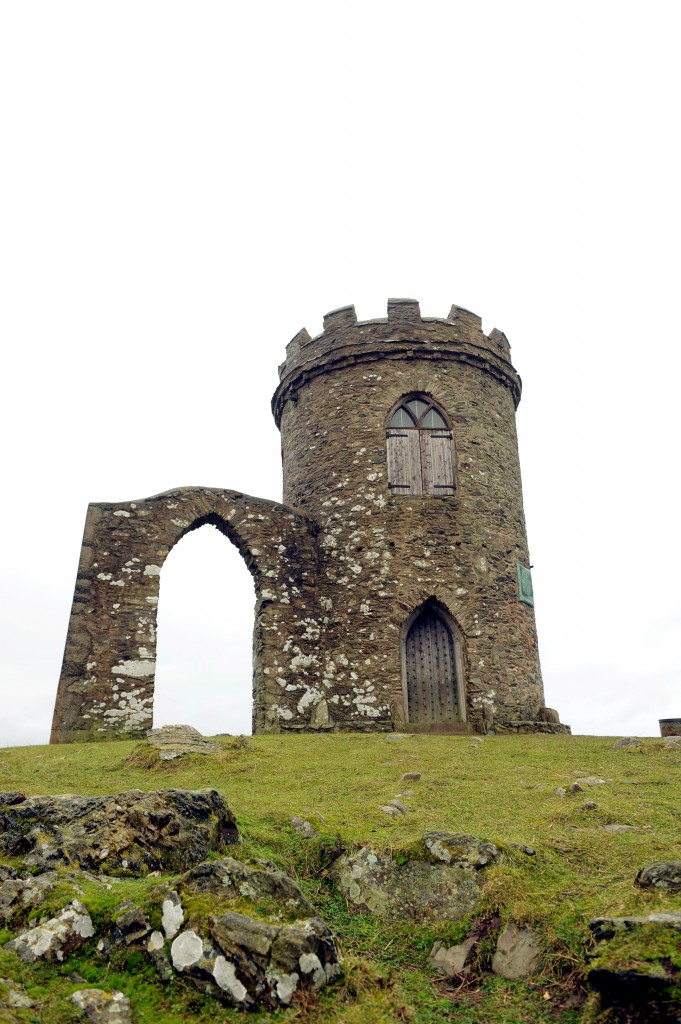 You don’t need me to tell you this, but Old John, a chubby stone tower that looks a lot like a beer tankard, is Leicestershire’s most iconic landmark. This photogenic enigma has been crowning the highest, rockiest peak in the tumbling, well-loved acres of Bradgate Park since the autumn of 1784.

In the intervening years, Old John has become part of the family. It appears in our photo albums with the regularity of a likeable relative and, as time has worn on, has become a destination in itself.

But while so many generations have gazed up at this isolated Gothic building, often breathlessly, after a determined march, few of us have had the chance to open its fairytale door and look inside.

Which is why, on a wet and windy January morning, after a quick call to Peter Tyldesley, Bradgate Park’s obliging land agent, we’re climbing up Old John’s steep hillside, accompanied by park guide Roger West, who’s carrying a key.

Once at the summit, me and photographer Alex Hannam exchange excited looks. County raised, Old John has always been part of our life’s architecture.

We, in common with many others, feel a strange mix of ownership and reverence towards this little yet commanding tower.

Our Bradgate Park guide, the lovely Roger, understands where we’re coming from. He was raised in the city, in Woodgate.

“Old John signifies this part of Leicestershire – the crags, the hills,” he nods. “It’s moorland in a lowland county.

“It’s a unique landscape. And if you come along London Road and get to the Mayfield island by Vicky Park, if you look across the valley in Leicester city centre, you can see Old John in the distance.”

We stand in front of the castellated tower’s heavy studded door. It’s an arched, weather-beaten slab of wood. Over the years, it has taken a battering not just from the elements, but from those who have sweated the climb and opted for a spot of scenic graffiti.

Roger turns the key in the lock. The heavy door, grinding against the floor, is pushed wide as rain is buffeted inwards by a sudden blast of icy wind – a common enough occurrence here, at the highest point of the park.

The gloomy light from outside reveals an interior that wouldn’t look out of place in Hobbiton. 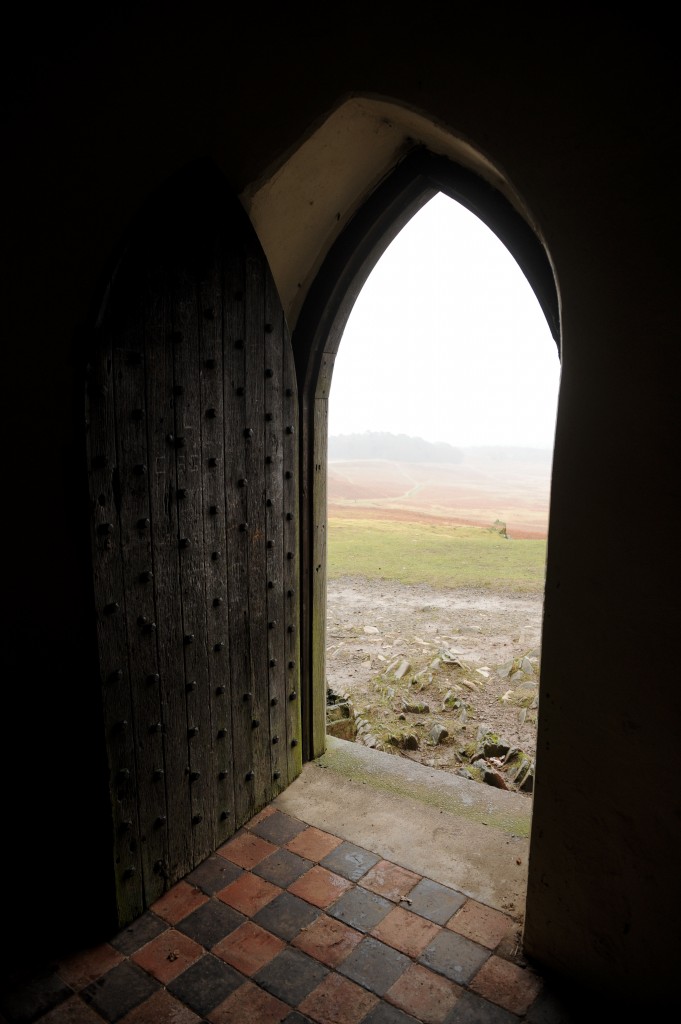 It’s a white painted room with circular walls and floor, patterned with light brown and dark brown Minton tiles. It has a high ceiling. A black wrought iron fireplace holds the long extinguished remnants of a fire on the right- hand side of the door.

To our left, a wooden staircase snakes around the wall to the first floor. A small army of Harlequin ladybirds, dozens of them, cling to the inside of the door frame.

It’s the barest of rooms, except for a couple of old information boards about the building. There are no pixies, fairies or elves. No deranged janitor, witch or hermit. Just the sound of a blustering wind. Old John, surprisingly enough, doesn’t even have a smell.

What it does have, however, is a surprising number of apocryphal stories.

Let’s start in 1786. George III is on the throne and a blazing bonfire centred at the highest point of Bradgate Park can be seen from miles around.

The bonfire is the culmination of a day-long party to mark the 21st birthday of the future Sixth Earl of Stamford.

But the party soon turns to tragedy when a pole at the centre of the fire falls down, striking and killing the earl’s favourite servant, Old John.

The following year, the birthday boy’s father builds a memorial tower to the old man on the site of the fire. It’s in the shape of a tankard, due to Old John’s liking for ale.

It’s a great story, but we know the earl’s 21st birthday celebrations took place two years after the tower was built, says Roger. 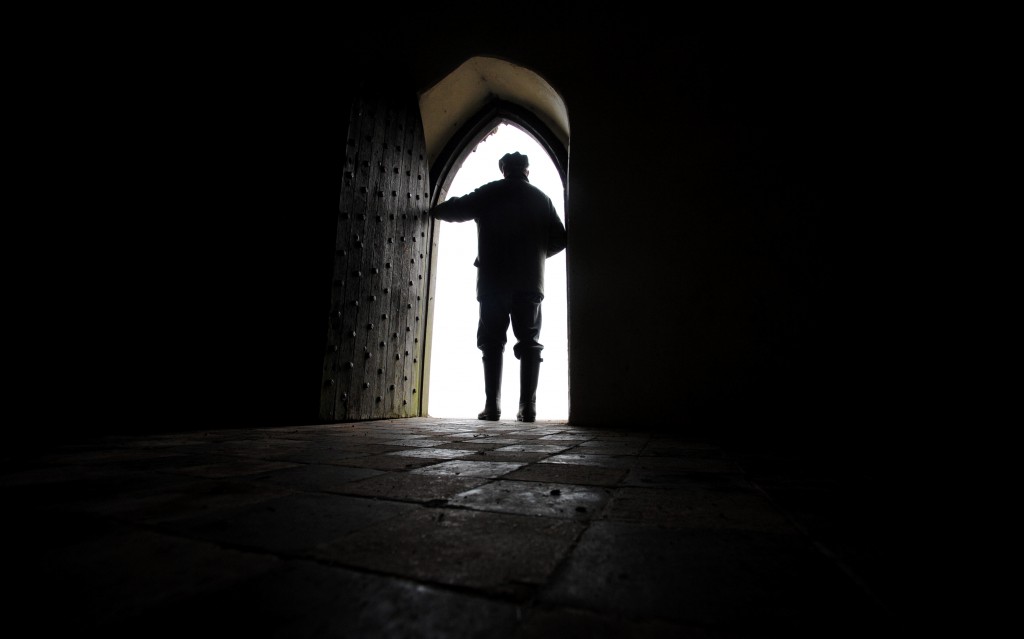 Another story takes into account the fact that before Old John owned the horizon, the hillside belonged to a wooden windmill. It was a pole windmill (Yes, another mention of a pole) – which meant it swivelled on a central shaft to face whatever direction the wind was blowing.

The last miller who worked there was reputed to have been a man called… Old John. Although we know the last owner of the windmill was a William Platts. His windmill is believed to have been destroyed in the summer storms of 1784.

Platts subsequently built his next windmill on Lint Hill in Newtown Linford in 1789.

And, there’s another story, quilled by a cartographer in the year 1754. On a map of Leicestershire and of Bradgate Park it says Old John next to a windmill in full sail. Old John being the name of the hill.

We navigate an uneven wooden staircase, and climb to the second floor, currently cloaked in darkness. Roger removes horizontal metal poles to take the thick wooden shutters off the lancet windows.

The light floods in and while the room is as Spartan as its predecessor, we’re afforded some stirring views of open parkland. The clouds hang heavy on the grey, green and brown horizon and dotted randomly in the distance, you can see red and fallow deer.

“If you look to the east,” says Roger, once the shutters are down, “the next highest point is the Ural Mountains of Russia.”

“You learn something new every day,” smiles Roger. 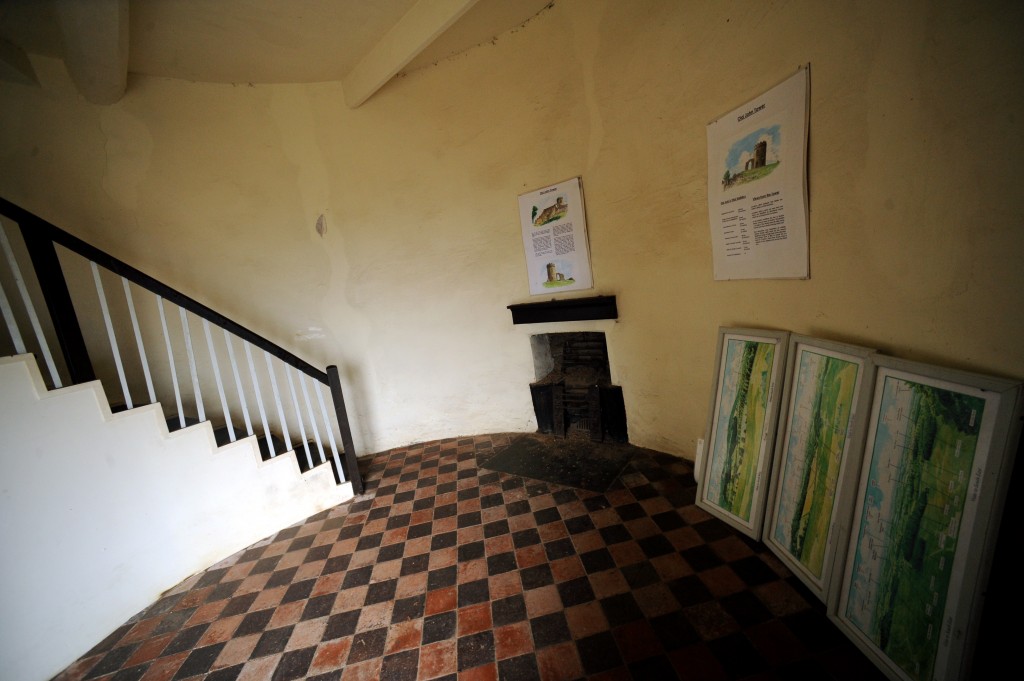 A s for what Old John is, well, Roger puts it succinctly. “It’s a useless building,” he explains, almost apologetically, “Pretty on the landscape.”

Back in the old days, he explains, when rich young men went off to take their fill of Europe, especially far-flung climes in Italy and Greece, many brought back with them a taste of their travels.

Old John is one such romantic tower in an isolated location. The correct term for Old John is a folly – a mock ruin.

Built for the Fifth Earl of Stamford by stonemason Thomas Sketchley, of Anstey, Old John was based, some believe, on Mow Cop, a folly on the Staffordshire-Cheshire border.

The architect of Old John remains uncertain, although there’s good reason to believe John Hope, the Cheshire man behind Mow Cop in 1754, was responsible.

Drawings show Old John originally had ground-floor windows, but they’ve long since been bricked up.

Early photographs show the archway was also once part of a larger wall, which contained three lancet arches.

It was reduced in the mid- 19th century to become the classic beer mug shape we know today.

That was the handiwork of the Seventh Earl of Stamford and Warrington, when he laid out a practice circuit to race his horses around Old John. 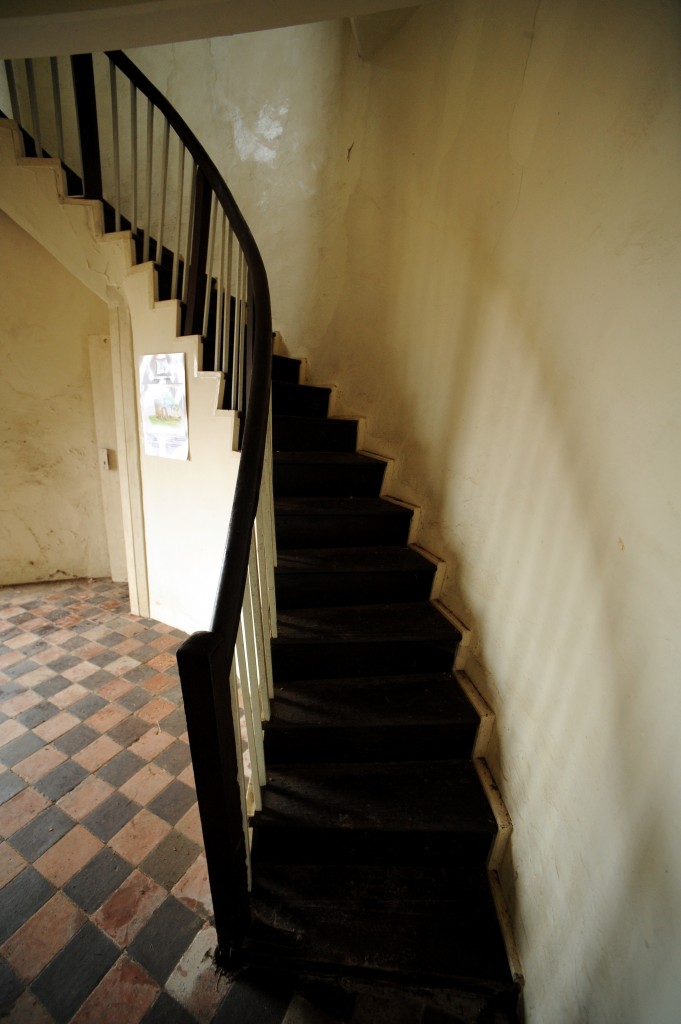 I t’s the first floor of the building, with its watercolour views, which give you true appreciation of the folly’s incredible location. “The first line is the race course,” says Roger, pointing down to the very beginning of the hillside, and to a path that follows a mile-and-a-half course named the Old John Watering.

Old John, in the 1800s, was used as a lookout for well-heeled people enjoying the horse racing. 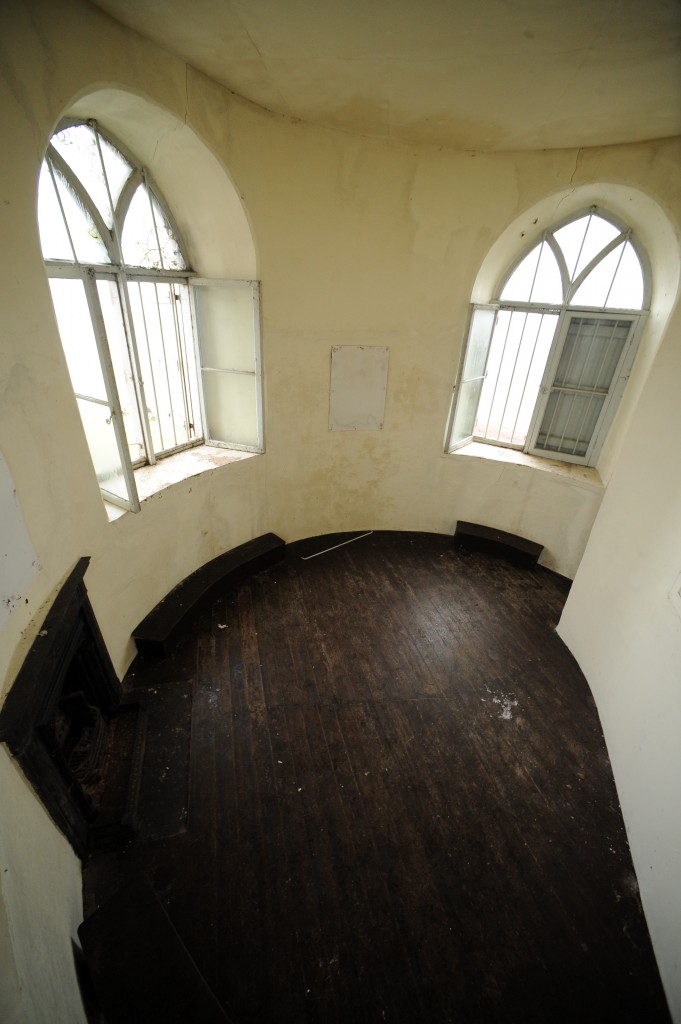 The building, back in the middle of the 19th century, with a roaring fire on each floor, was likely a party pad forand hangers-on of the Seventh Earl.

“It was probably well- carpeted,” says Roger, “and the earl would have brought their provisions up and had a grand old time.”

Even now, it’s hard to imagine a more special or imperious place to have a little celebration.

As for the top of Old John, it’s out of bounds.

“We can’t go to the roof. It’s too dangerous to go on there,” says Roger.

“The crenellations are not very tall.

“We only go up to maintain the radio system, which is just for park use.”

After a spot of photography and greedy eye-feasting, we leave Old John’s uneven stairs and magical views and wander down to have a look at the old stabling for the earl’s horses.

The stables were partly hewn out of the solid slate rock beneath the tower.

Horse troughs and a tiled floor remain there today. It’s an impressive sheered wall of granite edged with bricks that were laid down by old, skilled hands.

The owners of those old skilled hands wouldn’t have been too impressed if they had found empty beer cans discarded all around. Nor were we.

I t’s time for us to go, although we know it won’t be long before we’re back at Bradgate Park.

Whoever the individual was who designed Old John, or the one who wished to see classical Europe stand tall in the wilds of Leicestershire – the same location, we shouldn’t forget, which bore and raised a queen of England – one thing is clear: a Gothic tower that resembles a beer mug is not just an eye-catching part of our cherished landscape, it is, for the better, a little part of our lives. 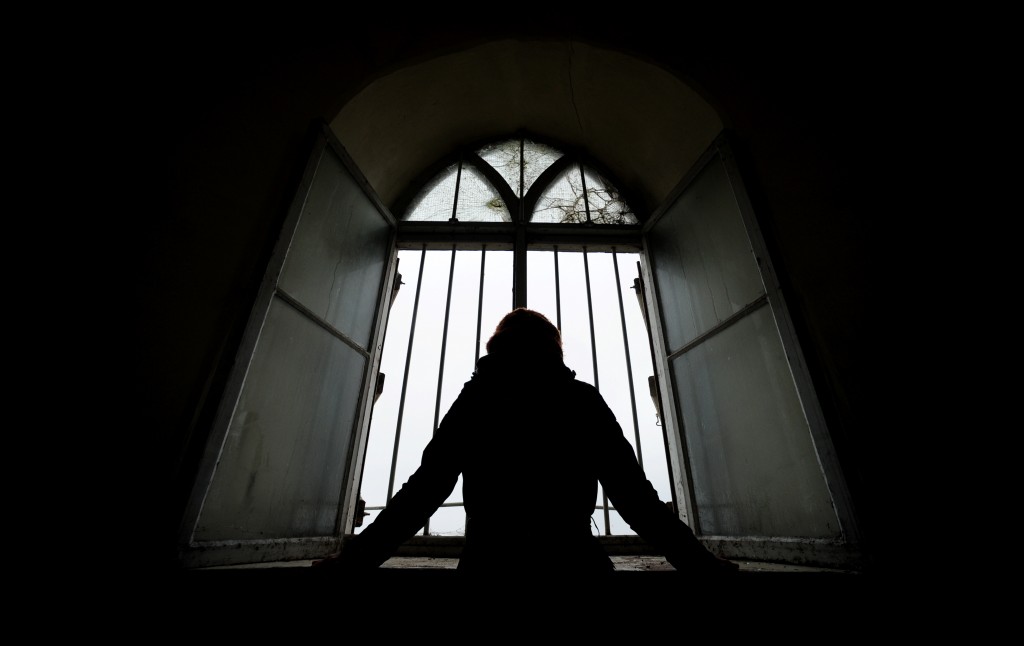 First published in January 2015. Images and text courtesy of the Leicester Mercury.