Uncategorised Greyhound racing is a thing of the past…like jousting

Greyhound racing is a thing of the past…like jousting

It was once as English as eating fish and chips from newspaper. No longer. As developers eye up Hinckley greyhound track, Cat Turnell goes to the dogs. 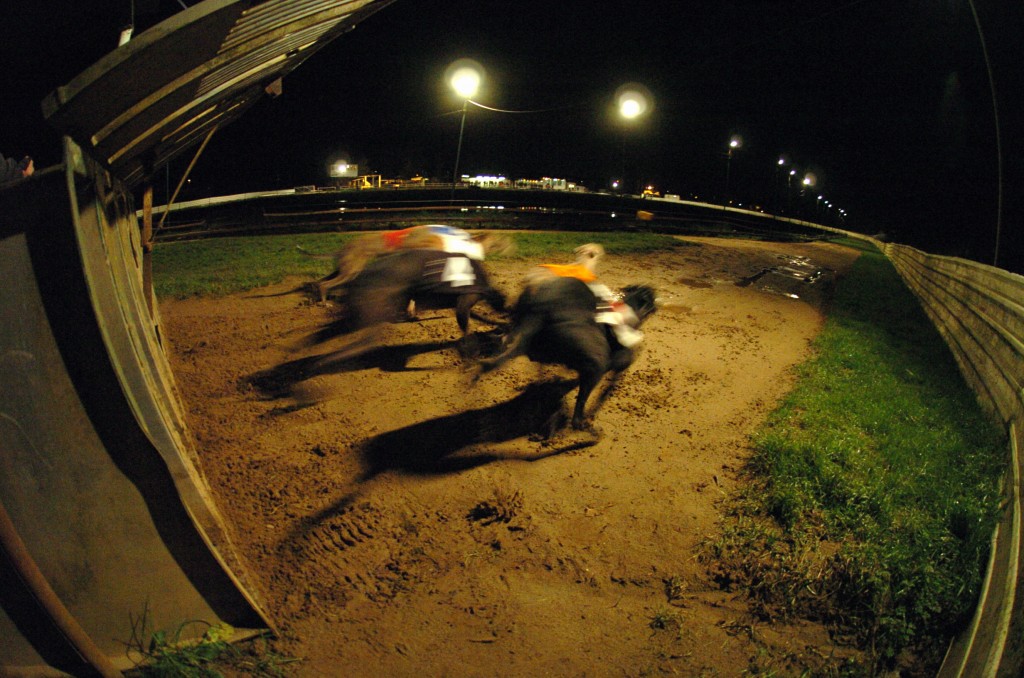 There’s a chill in the air at Hinckley Greyhound Stadium, but it’s nothing to do with the temperature outside. While men in flat caps pat each other firmly on the back and square up to the racing oval to watch eight of the night’s races, there’s dark talk over the track’s future. Muttering abounds of houses, planning applications and eras ending.

“We don’t want to lose it,” confirms an earnest regular, when he spies my reporter’s notebook.

In racing parlance, Hinckley’s a “flapper track”. A circuit where chaps with caps can bring their hounds, put them in the race and have a punt with the bookies in the process.

Hinckley’s track is one of a few of its kind left in England.

“You bring your own dog, you keep it yourself, you ring me up and you put it in the race,” explains Tom Grant, the ground’s owner, as the evening gets underway.

Greyhounds are part of a family tradition for Tom, whose son Chris and daughter-in-law Natalie now run the business. Tom’s dad Joe ran two tracks in the town before starting the one in Nutts Lane in the early 1940s. 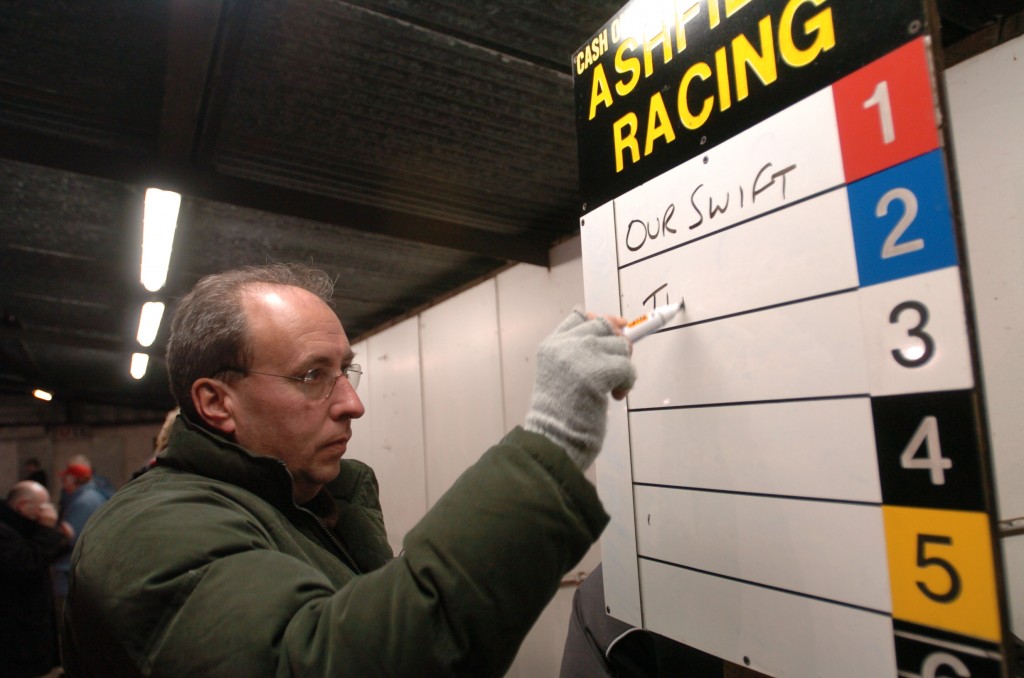 Bookie Robert Maltby setting the odds before a race

Back then the sport was in as rude health as the greyhounds seen sprinting around the course tonight.

“In Leicestershire, we had Leicester stadium, Melton, Syston, Coalville and me. There’s me left, that’s all,” he sighs as the minutes build up to the first race at 7.30pm.

There are lots of reasons why the sport is in decline, says Tom. Punters are dying off, people don’t want to put the graft in to caring for the dogs and nobody like to call themselves working class any more,” he says. “But you’ve also got the aspect that money in the racing game isn’t there any more. The simple reason for that is people don’t carry money.”

Monthly wages now go straight into bank accounts, says the 60-year-old. It’s not like the old days when you had a weekly wage packet and a flutter at the end of the week. At the end of the month now, he says, people are too skint for a punt.

Whippet racing has already gone, Tom says. And greyhound racing will be the same. “Regardless of planning,” he adds.

Planning is the word on everyone’s lips tonight. The housebuilder Crest Nicholson wants to see 89 homes on Tom’s land.

At Hinckley and Bosworth Borough Council last Tuesday, the plan was turned down. Reasons included its loss to the community and the site’s proximity to open countryside.

However, it doesn’t stop the builder coming back with a revised plan – and, although Tom loves racing, he’s got his retirement to think of. 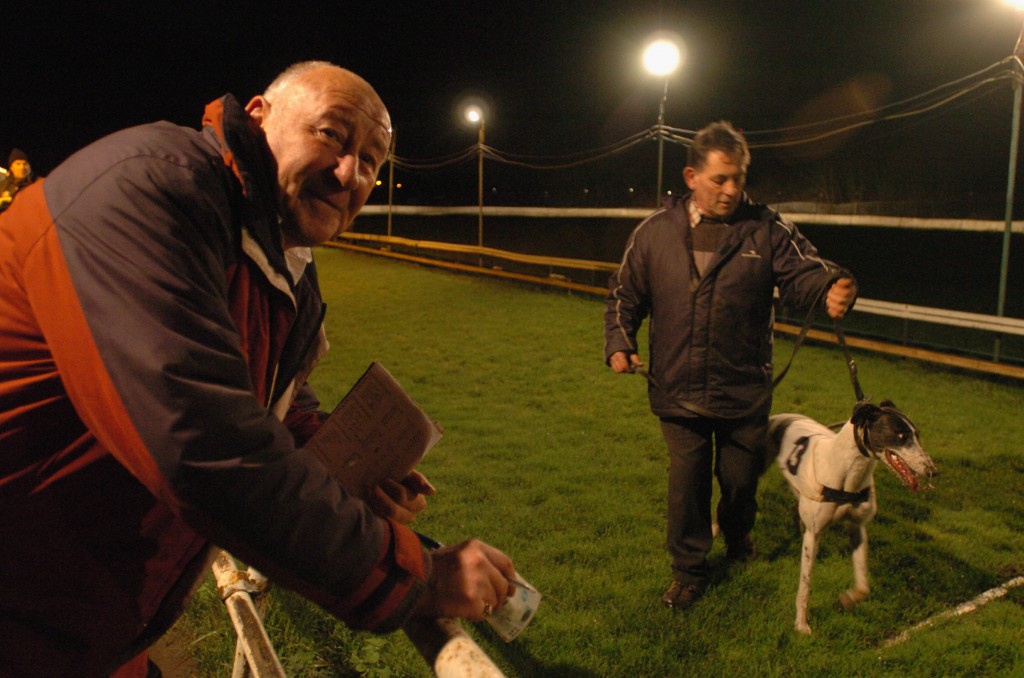 Tonight, there are about 100 people braving the trackside chill. They are mostly men aged 40 plus, although there’s a few women and a dozen or so children milling about the clubhouse or holding on to the dogs. And these dogs aren’t just racers, they are pets.

“The time of year, this is what we call our hardy perennials,” says Tom, looking around at the chill-reddened faces. “And this weather isn’t bad, it’s January and February that are the coldest.”

The greyhound track holds eight races on Wednesday and Saturday nights, it used to be 14. There are six dogs in a race and, if you come here in the summer, you will find coaches parked on the potholes out front.

“I’ll tell you this, when this track closes, it will hurt a lot of people,” says Tom Young from Coalville, who’s anxious this ground doesn’t go to the dogs.

Tom, a stout Irishman, has been watching greyhounds, come rain or shine, for 40 years.

“I used to go to the racing in Coalville,” he says, hands stuffed deep in his pockets. “Coalville was a great track. You’d bring the dog to the races on a summer night, bring the wife and the kids and have a night of it.

“I have dogs, I haven’t brought any runners tonight, but it doesn’t make any difference. It’s a night out for me.”

Robert Maltby, from Nottinghamshire, is one of four bookies here tonight. He’s been taking bets at Hinckley for 14 years. 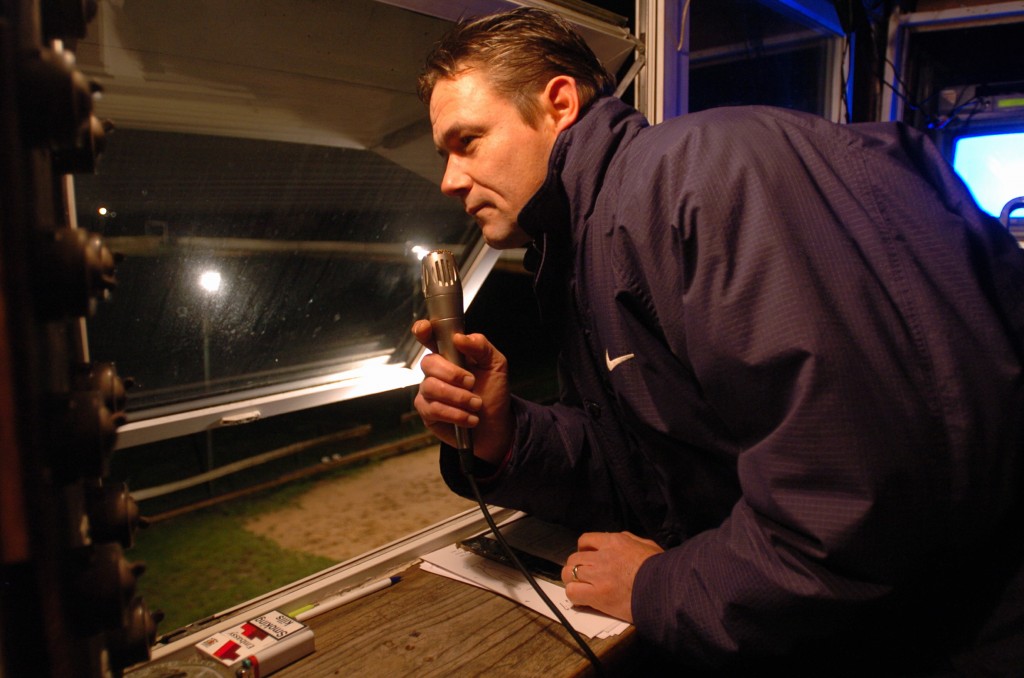 “A lot of people haven’t been coming because there’s been that much talk of it shutting. If the planning hadn’t been brought up there would be more here. There would be at least 150 people.”

Mention the letters NGRC (The National Greyhound Racing Club) to most people here and you’ll hear a responding low growl. The NGRC is licensed racing, it’s not for the folk who do it for fun. It’s for people making a wage from it, not those keeping the dogs as pets. Legislation is now heading the way of the flapper tracks. Robert mutters NGRC through gritted teeth.

One NGRC policy, he says, is that dog owners must kennel their hounds for two hours before a race. Kennels ain’t cheap, he adds. 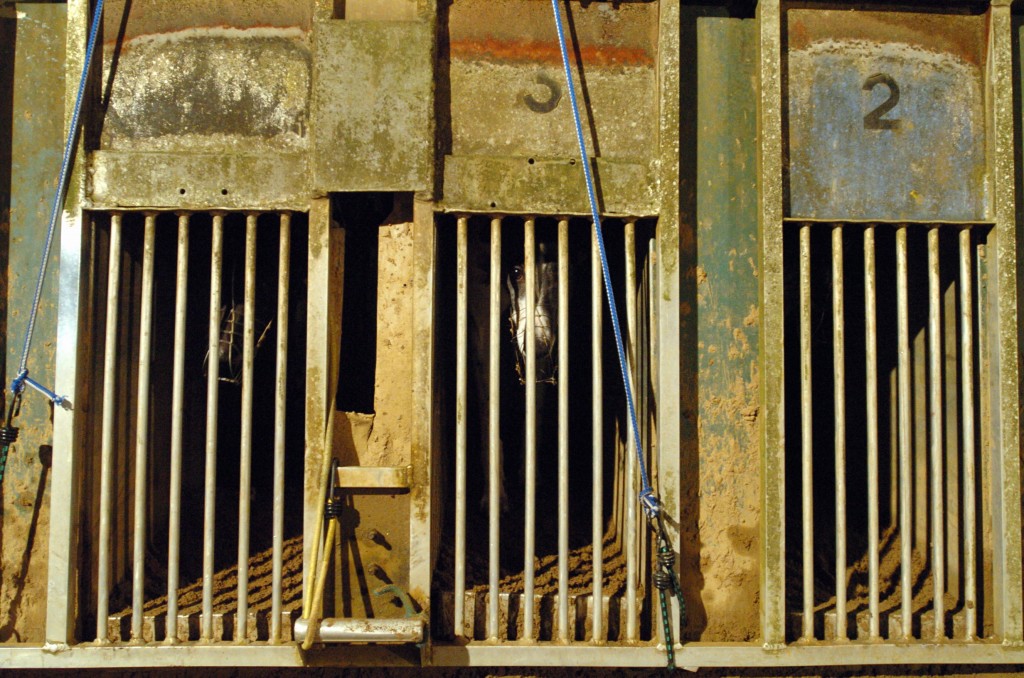 Amid the talk, the rumours, and the meaty whiff from a burger van, the crowd’s having a jolly good time.

“As you can see, it’s a happy atmosphere, everybody knows everybody else,” says one bear-sized bloke in a waxed jacket. “Strangers stick out like a sore thumb.

“People come here because they train their dogs and they have about £200 on it – that’s their Christmas box.”

A dog in a black and white jersey streaks across the finish line as we speak. A few feet away Albert “Nobby” Clark is jumping for joy.

“I’ve just had a big tickle,” he grins, dashing back from collecting his £300 winnings.

“And the bookie is hanging from that rafter over there,” jokes his mate, pointing into the distance.

“I’ve been coming here 20 years and I’ve seen some money come and go at this place,” smiles Nobby, “I love the buzz of it.

“I go NGRC racing and there is no atmosphere at all.

“You get a good atmosphere here; with the bookies, with the crowds.

“Everybody knows everybody here, it’s like a family outing. 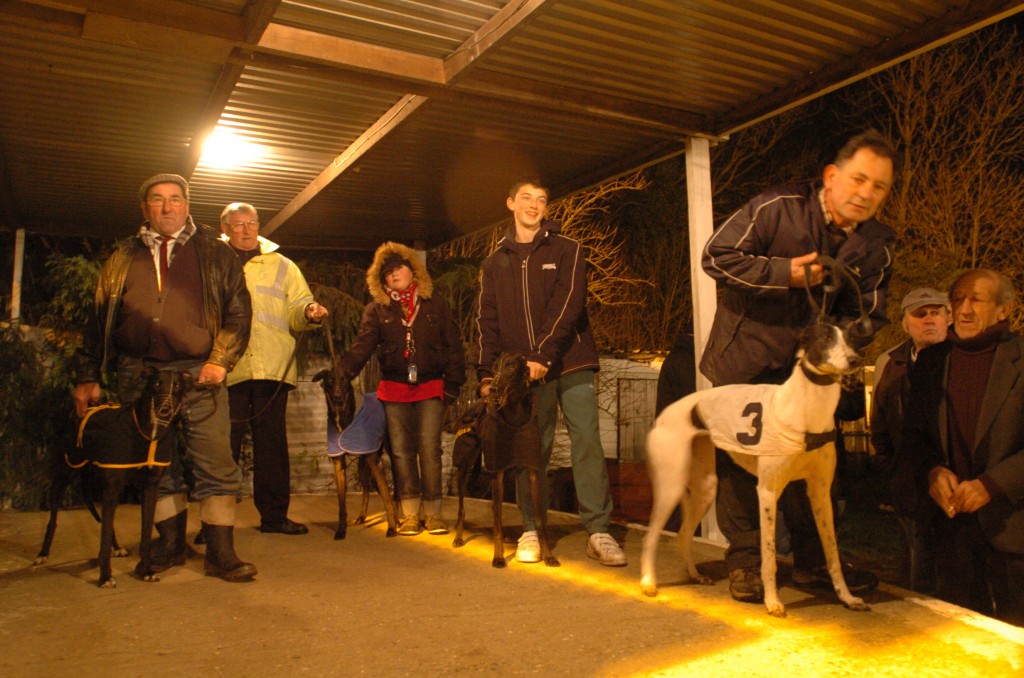 Greyhounds waiting to race at the side of the track

In one race he won £6,000, adds Nobby, smiling at the memory. Tom Grant had said the bitch he owned would never win.

But there’s luck and there’s real luck, surmises Tom later, as another greyhound belts across the finish line.

“Unless a miracle happens,” he says, “once I start losing money, I shall stop racing.

“People say it’s a tragedy, but it’s how things have gone throughout the country,” he says looking around. “Y’know, it’s just the same as jousting. It’s a thing of the past.”

Pix and text courtesy of the Leicester Mercury. Can’t remember the year. Maybe 2007. 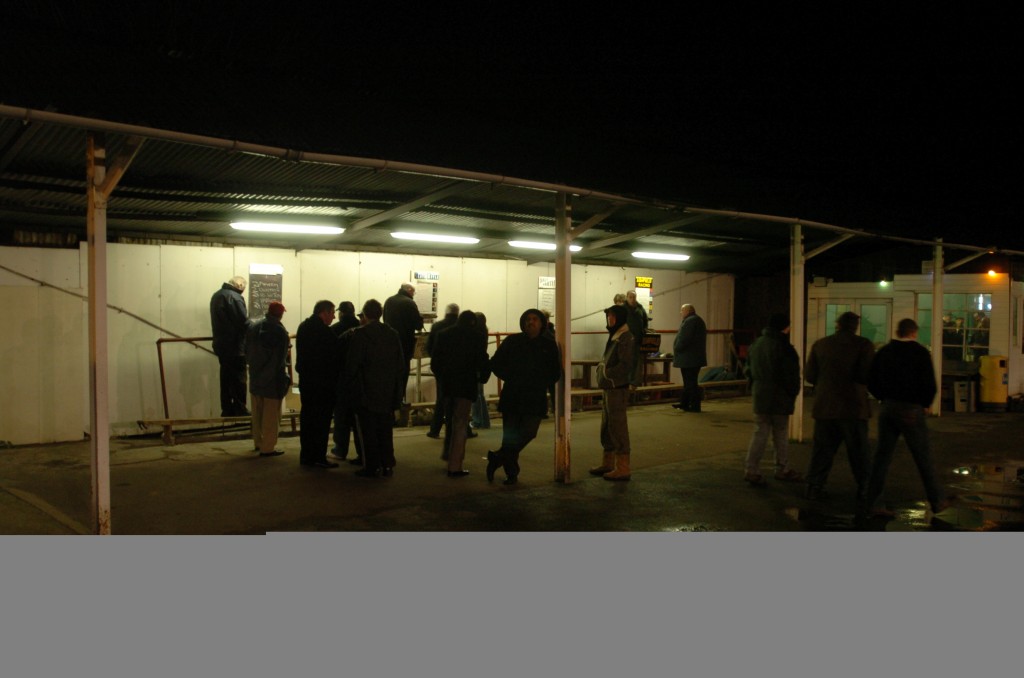 Punters waiting to place their bets