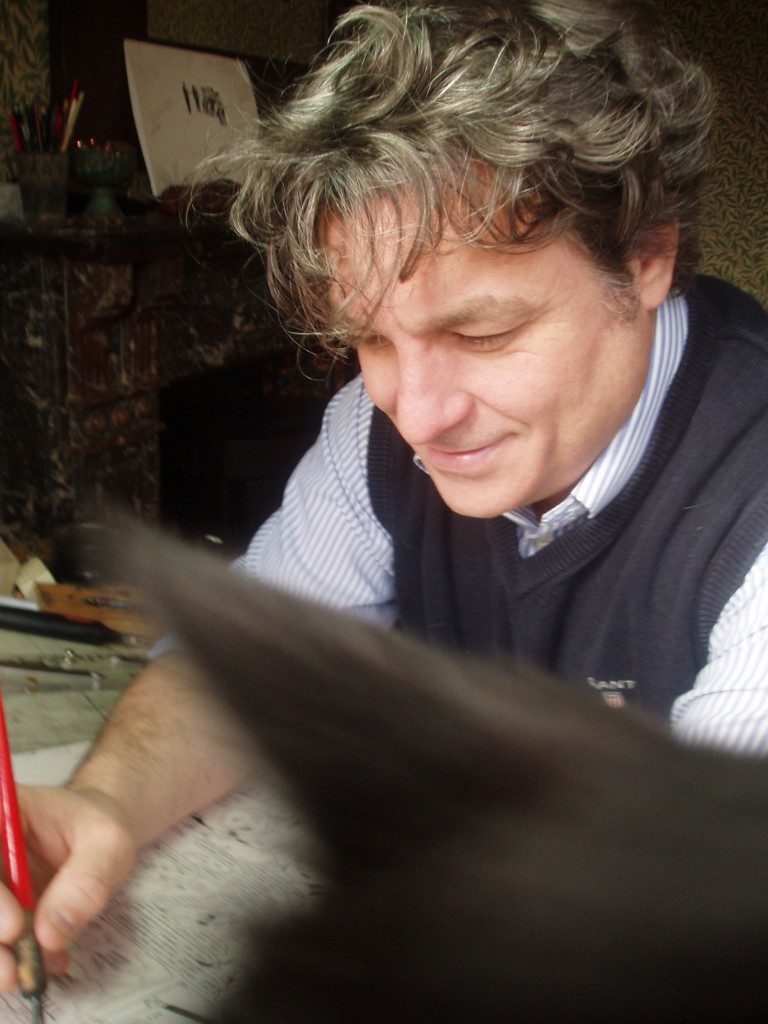 Graham Dury was working on a botany PhD at the University of Leicester when he accepted a job at Viz, the cult comic which parodies the likes of The Beano and The Dandy for a kidult audience.

Fast forward 27 years and Graham’s now editor of the mag famous for spawning such unlikely national treasures as Roger Mellie, The Pathetic Sharks and The Fat Slags.

Today, like most days of the working week, Graham can be found in a shed at the bottom of his garden in Newcastle. In reality, it’s more of a large log cabin with a wood burner, where he and fellow cartoonist Simon Thorp put the profane pages of Viz together.

“People are often disappointed when they come to see us,” smiles Graham in acknowledgment.

“They expect us to be whacky – instead, we’re two very middle-aged men sat in a shed drinking coffee.”

Over Christmas, many a dad, brother and son will have been treated to the latest Viz annual – The Camel’s Toe – a time-honoured cornucopia of cartoons, toilet humour, Top Tips and Letterbocks, the mag’s priceless correspondence page.

“I’m just putting the annual together for next year,” says Graham. “It’s always the first job of the new year and we like to get that done.”

And the title of next year’s annual? It’s going to be called The Dutch Oven… you can find out what that means on Google.

It could well be a past life, admits Graham, but it’s been 30 years since he first arrived in our city to research his PhD, fresh from a botany degree in his native Nottingham.

“I have very happy memories of my time at Leicester,” he says, wistfully. “I looked on Nottingham, where I was born, and Leicester as sort of twin towns, both very similar sizes, both with a similar accent and both decamped to Mablethorpe in August.

“And I particularly liked the shops in Leicester, especially the market. I don’t know if it’s still there or not, the market stall where Gary Lineker’s dad worked? I used to love wandering round there.”

Throughout his academic life, Graham kept up his cartooning, a legacy of childhood, and was good enough to get published in Viz while he was still fiddling with plants in a university laboratory.

Back then, Viz was gaining a following for its fresh treatment of a genre hitherto unused to sailorly language. Aside from his doodling, Graham was otherwise a typical PhD student, wearing the white of a lab coat during the day and the grease of a TJ’s veggie burger by night.

“I used to share a flat above a card shop on King Street with some other PhD students and we used to take turns cooking,” he recalls. “One lad, Hari, was from Malaysia and he used to cook us the most fantastic food with ingredients he got from Belgrave Road. When it was my turn, it was always a trip to TJ’s or the chip shop on Granby Street.

“They were very interesting times,” he says, chewing over the memories. “I can’t remember the place where we drank in Leicester, but we lived for a year in halls by Victoria Park.

“The thing I remember was TJ’s Burgers, which was fantastic. It was great.”

Graham’s notoriety as the head man at Viz is such that today he has his own Wikipedia page. Although, he says, a lot of his university details are incorrect.

“It says I was engineering cacti. I wasn’t, it was tomato and tobacco plants. For disease resistance and drought resistance. At the time, it was more about genetics than botany. It seems like a lifetime ago now… it was good fun.”

And as for the degree?

“I never finished it,” he says. “I got two years into it and I got offered this job up here. I was perfectly happy doing research, but this opportunity came along. I enjoyed the research, but it’s a bit of a nomadic lifestyle, at that time you were wandering from one three-year contract to another. It wasn’t a very secure job.

“In Leicester, they were lovely people without exception,” he continues. “I really got on with everybody. But,” he adds, “I don’t regret leaving because the stuff I’ve done since has been really enjoyable.”

The photos we have of Graham and his colleagues were taken outside the university’s botany department in April 1986.

“I think that photo was taken the day Chernobyl went off,” he says. “We all went on the roof of the Adrian Building with Geiger counters to see what was happening. Happy days.”

It’s not just nuclear disasters and the Lineker fruit and veg stall that Graham remembers.

“I learned to canoe in Leicester, on the canal,” he adds. “Me and a few others from the lab used to go down after work on a Thursday and spend a couple of hours paddling about. I remember one day, one of my colleagues fell in and got a mouthful of finest Leicester canal water.

“Without a word of a lie, he had the squits for nearly two years before they identified the bug and got rid of it for him.

“So warn your readers against canoeing on the canal,” he laughs. “Or if they do, they should make sure they have a good selection of books in their lavatory. Perhaps a few of ours, if you’ll forgive the blatant plug.”

Having given up a career in plant classification, Graham threw himself into his work for Viz, which at its height was selling 1.2 million copies a month.

The comic’s perennial favourites, a pair of obese trollops called Tracey Tunstall and Sandra Burke – AKA the Fat Slags – are from the Midlands, reveals Graham. Mansfield to be exact. For those who don’t know, Tracey and San are a pair of women for whom intercourse and chip consumption coincide.

“My colleague, Simon Thorp, is from Pontefract. We write them both together and draw them. He writes them down in his accent and we came to a compromise – Mansfield.”

Along with San and Tray, there’s the duo’s one-liner paramour, Baz. A weasely man with a pencil moustache. There are plans afoot for him.

“I’m thinking of giving Baz a shave,” says Graham. “I always open the comic, then I’ll see in two or three frames where I’ve forgotten to put his moustache on.

“And,” he says, “I think we’ll introduce a new character hiding in the pages like we have with Jimmy Hill.

“Do you know Kim Chelstrem, the Swedish midfielder? He’s just moved to Arsenal. We’re going to do with him what we did with Jimmy Hill.”

“Some are only written with one issue in mind. We usually know quite quickly whether they’ll work or not. If we’ve spent longer than five minutes writing the script, they get scrunched up and thrown into the wood burner to make us warm.”

In 2004, against all likelihood, Hollywood bought the rights to make a film about the Fat Slags.

“There was less than 500 people who paid to see it in the country. Which is fantastic. It opened in Newcastle and closed after one day, with just six people in the audience.

“It was so bad, it really was, that no-one saw it. I didn’t. The Fat Slags had a reputation to protect and, irony of ironies, it was, because the film was so dreadful.”

Is it true that most Viz characters are based on real people?

“Most of the characters we do are usually people we’ve seen or people we know,” admits Graham.

“Spoilt Bastard was based on my brother. He, Richard, was dreadful when he was a kid. He’s quite a lot better now. He once worked for the Loughborough Echo as a printer.”

Roger Mellie, Viz’s clanger-dropping newsreader, was based on Roger Griffiths, who worked for Tyne Tees television in the north east.

“Chris Donald, the former editor, went on a school trip to the Tyne Tees studio, and he, Roger, was in the canteen. He saw a face he knew from the television that did the 6pm news slot. And his language was just awful.

“San, her haircut was based on a girl’s haircut I used to see every morning when I went to get the bus in Clifton. She’s an amalgam of people I’ve seen up here and in Nottingham, although they’re all over the country.

“Baz, I like Baz. He’s probably the best character in the Fat Slags. He gets some of the best lines.

“Going back to the film,” says Graham, “I don’t want to talk about it so much, but we had a big argument with John Brown, the publisher, when he said he’d sold the film rights.

“They’d got a proper scriptwriter, an English guy working in Hollywood, who we met. And the thing about the characters,” says Graham, imitating the scriptwriter, “…is they’re abusive, they like drinking and they eat a lot… they’re like everybody else out there looking for love.”

This stunned Graham and his colleagues into silence.

“They’re not looking for love,” he laughs. “They’re like The Terminator. They’re relentless. They eat and f*** and nothing else. We told him, ‘You’ve got the wrong end of the stick there’.”

As for the socially incompetent galaxy of Viz characters over the years, Graham has his favourites.

“I like Roger Mellie,” he says, “I draw him, as well. I like physically drawing the Fat Slags, they’re all round and I can draw round women having sex. Which is a nice way to spend the day.

“With Roger Mellie, you see what’s going on in the world of TV and there’s my next script.

“Have you noticed that a lot of the programmes Roger pitches to Tom, his agent, they’re actually being made? Celebrity Come Dine With Me was one of them. He fed them a lot of meat he bought from a car boot sale. The final frame is the horse racing commentator, John McCririck, panting, running along a conveyor belt, soiling himself. It was the most awful thing I’ve ever had to draw.”

That said, naming celebrities can be something of a litigious minefield for Viz.

“We’ve got a barrister, an expensive barrister, who reads the comic before we print it and she doesn’t laugh,” nods Graham. “She reads it thoroughly, and she sends us her bill.

As the interview winds up, Graham’s thoughts return to the East Midlands.

“The thing I miss the most about Nottingham and Leicester are cobs. Not the cobs themselves as you can get them up here, but the term ‘cobs’.

“Up here they are called stotties and it takes some getting used to.

“When I first moved up here, 27 years ago, I would regularly ask for cobs in a shop and I always felt like Gordon Jackson in The Great Escape, where he gives himself away by speaking English to the German officer. They’d know I wasn’t a Geordie and the game was up.

“I can do a half-decent accent these days, and,” he smiles, “I get through most days unscathed.”

First published in the Leicester Mercury in February 2014.