Countryside From Leicestershire to Middle Earth, calling at Westeros and Camelot

From Leicestershire to Middle Earth, calling at Westeros and Camelot 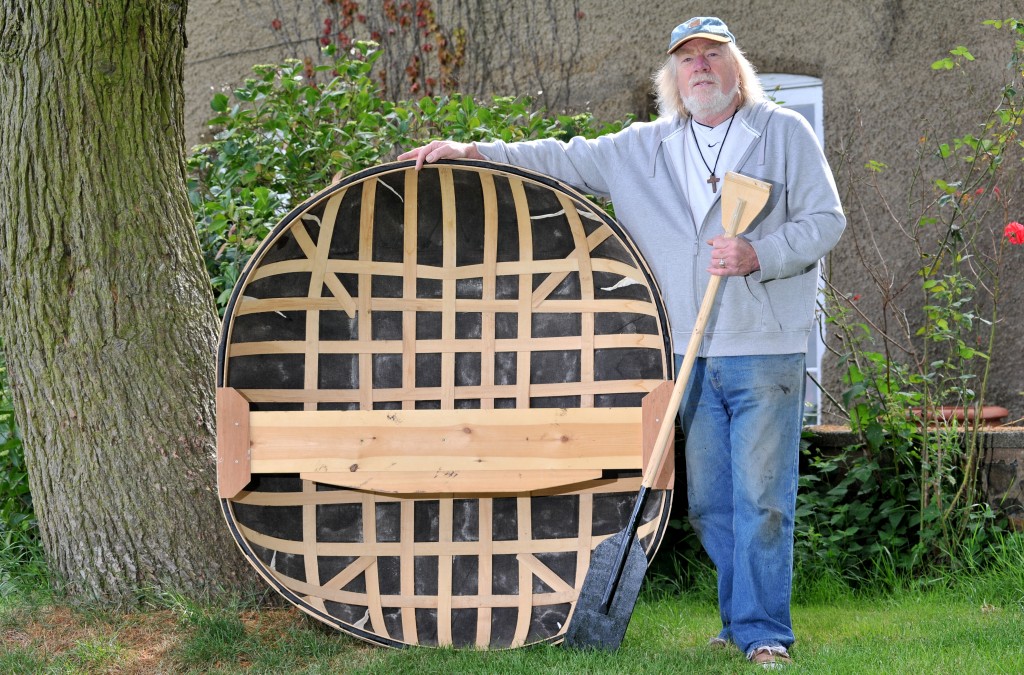 It was supposed to have been a little chat about coracles, a gentle natter about how the ancient river boats handmade in rural Leicestershire end up in the waters of Westeros, Middle Earth and Camelot.

And it was, mostly. But then, like the boats themselves, you end up going with the flow.

Master coracle maker Kevin Grimley , in a paint and varnish splattered hooded top and jeans, a T-shirt with the words Free Range Man and a simple wooden cross around his neck, extends a smile, a “Hello” and a large leathery craftsman’s palm.

Just behind him, propped bottom-up on a table, is a boat the shape of a half walnut shell.

Kevin meets me at the top of the driveway to his old stone cottage, St Joseph’s, in Charnwood Forest. His nearest neighbours and landlords are the Trappist monks of Mount Saint Bernard Abbey.

Inside the house, where novelist Charles Dickens once took shelter, we whisk past Elda, Kevin’s Italian mother in law, who’s washing up at the sink, and into a cosy room where Ellen, the love of Kevin’s life, is sat waiting in a chair.

In the room, on cue, the phone starts ringing. It keeps ringing. It rings off. It starts again. And this is how it goes for the next 30 minutes. The phone is routinely ignored.

“It’s the TV people,” confirms Ellen later. “When they ring up they ask about our “tiny boats”,” she smiles, “they’ve got no idea what they are or what they do.” 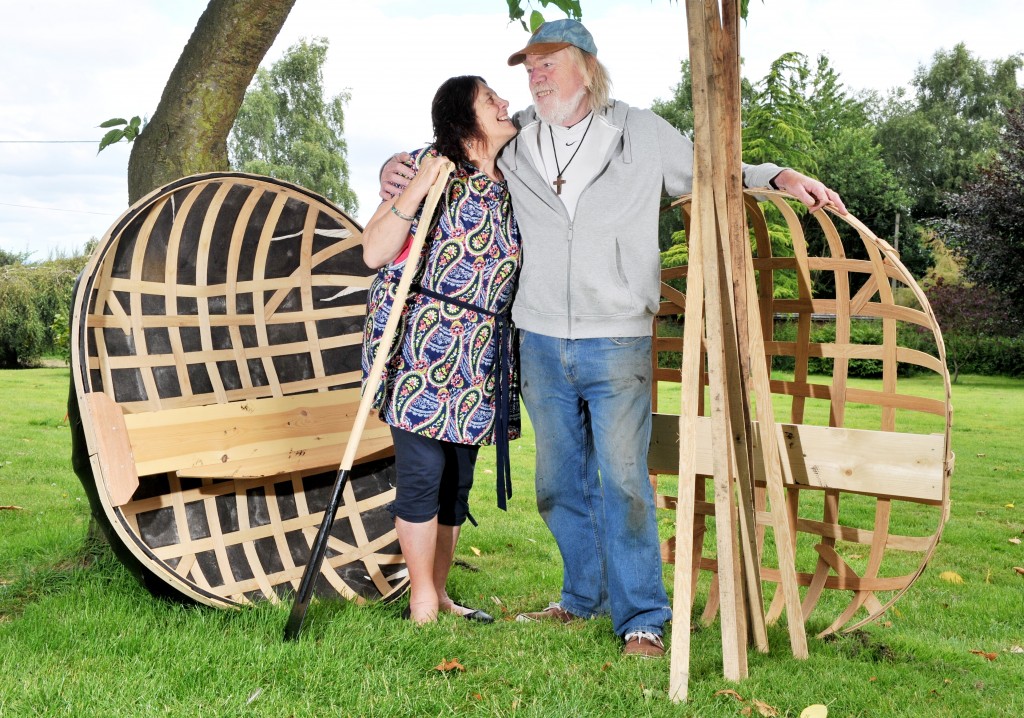 Ellen and Kevin Grimley – one of the finest couples you’ll ever meet. Pic courtesy of the Leicester Mercury.

The TV and film people have been busy with the Grimleys of late. A TV company has ordered three for a game show, others are for a new series about King Arthur. Warner Brothers have just bagged a couple for an undisclosed film. And the rest, they’re made for the likes of you and me, so we can catch our supper like our ancestors did in 1700.

Popularised in recent years by TV survivalists such as Ray Mears, the Grimleys’ coracles have been taking them on their own adventure. A journey which has brought them and their family to the ruggedly scenic shores of north west Leicestershire.

“I didn’t set out to do all this,” explains Kevin, with a nod to his surroundings. “It’s been gradual as I’ve gone along.

“We keep being drawn somewhere,” he says, “but not knowing we’ve been drawn. You go to school, you go to work, you have two to three kids. I personally thought there must be something more.”

Kevin and Ellen grew up in Hinckley. They met at Hinckley Fair, which has been going so long it was namechecked by Shakespeare. Kevin and Ellen were 16 at the time. They’ve been together ever since.

Like many in Hinckley’s once booming hosiery industry, Kevin became a knitter. One day he spoke aloud, saying that he didn’t want to be doing it for the rest of his life.

“Somebody heard me,” he says, with a soft you-know-who-I’m-talking-about smile.

Much, much later, after being made redundant four times, after jobs in engineering and driving, he and Ellen ended up in County Durham. And Kevin enrolled on a coracle making course, a few miles away from where, for 12 months, they were helping run a retreat for people frazzled by 20th century living.

“It was 1995. I was taught by a Welshman who does the coracle that we do – the Ironbridge coracle,” says Kevin. “It’s the English version, it was designed for the River Severn. It’s 300 years old.”

And, armed with the skill of making boats using slats of ash, calico, pine and bitumen, the couple returned to Barwell, their home for 30-odd years.

“A few years had passed and a friend came up and said can you make me one? And I’d forgotten how to do it. We’d been asked to make it for a garden fete at The Cedars Community Centre in the village.

“It was 2001, you were there (the Leicester Mercury), you took a photo,” he smiles, “and then it all started happening.” 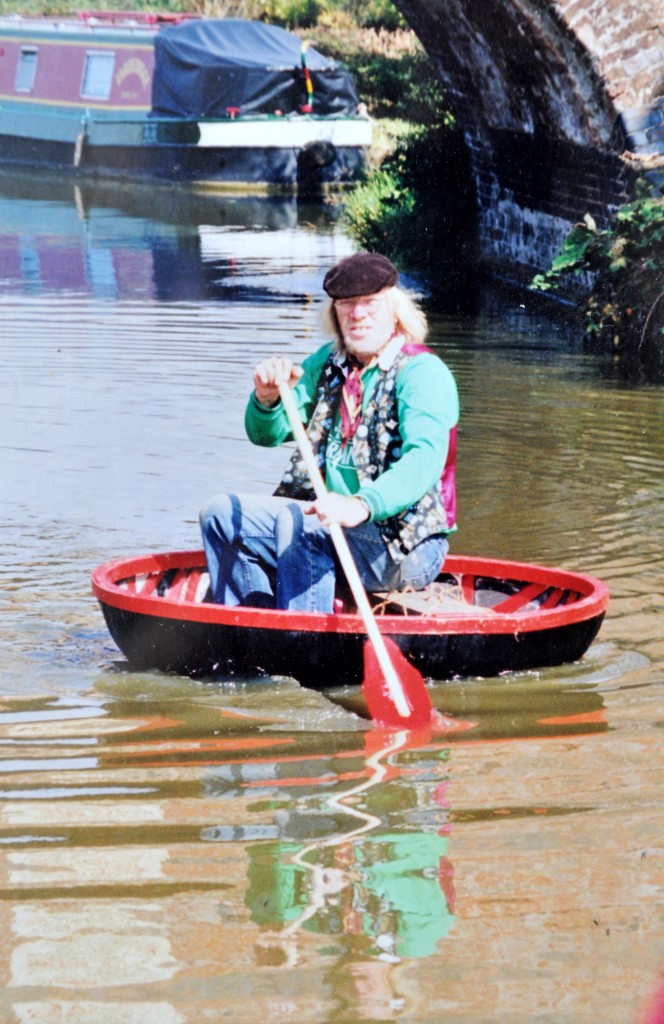 Kevin showing us how it’s done

“It’s part of our story, our journey,” explains Ellen. “It’s not just a hobby. It’s all of what a coracle stands for – the journey, the trying new things, we keep going.”

And so do sales, from Coalville to Westeros. One coracle appeared in a season two episode of Game of Thrones.

“My heart’s thumping,” says Kevin, when it appeared on screen.

“He, the actor,” adds Ellen, “was carrying it on his shoulder, properly, with his paddle”.

The Warner Brothers film is under wraps so that’s off limits.

But in the final instalment of Lord of the Rings, Return of the King, we learn the story of Gollum, and how he was once Smeagol, one of the River Folk.

And there he is, splashing about in an Ironbridge coracle. Most likely one of Kevin’s.

Kevin’s also been on TV programme Coast with presenter Neil Oliver, for a programme about St Bede in Newcastle.

“He just jumped onto it – it was like you never do that or you end up in the water. He didn’t know what he was doing.

“Apart from that,” Kevin winks, “it’s been boring.”

The coracle business, which is almost as niche as it gets, didn’t spring up overnight.

There wasn’t the interest there is today. So what the Grimleys did, as they always do, they just grafted that bit harder.

“What we settled on was cleaning jobs,” says Ellen, “early mornings and early evenings and having the rest of the days free. We were working to live, not living to work. If we were short of money I’d go and work in a garage because I’m trained in doing that.”

The coracle side of the business grew steadily. They needed more space. Their son and daughter in law went property hunting and that’s when they found St Joseph’s.

“They took us here, Anthony and Carey, his wife. Every room they took us in, it was perfect. There was a lot of handwringing. People like us could never get a place like that.

“We’ve come this far – let’s do it,” that’s they thought, says Ellen. “We sold everything up in Barwell and made the jump in July 2009. We get here and it’s breath-taking.”

And so far, so good.

“It was just that Kevin was locked away in the shed making coracles,” adds Ellen, “I’d got no-one to talk to.”

What am I going to do? she thought. And then Kevin suggested making cream teas.

“I can remember coming to the monastery as a boy,” he explains. “I came with my mum and dad and some relations. I had my first sight of a monk – they were a silent order then – I saw him coming through the garden and he had his hood up and he frit the living daylights out of me.

“Anyway, I can remember my mum saying “I’d love to go for a cup of tea out here but there’s no way to go.”

So she and Carey began making cream teas. They’d make scones with pots of jam and butter, put them in a wheelbarrow, and leave them next to an honesty box at the bottom of the drive. They sold, it worked.

“Can we have a cup of tea with it?” said someone one day. So they put chairs and tables out in their garden. One day a coach arrives with 30 people.

“You couldn’t believe the number of visitors,” says Ellen.

The option of renting nearby Abbey Grange, formerly The Belfry, came up, but they couldn’t really afford it.

“We went to church, we go to church at the monastery, and the reading was the feeding of the 5,000 with limited resources…and we thought: we’ve got to give it a go.” 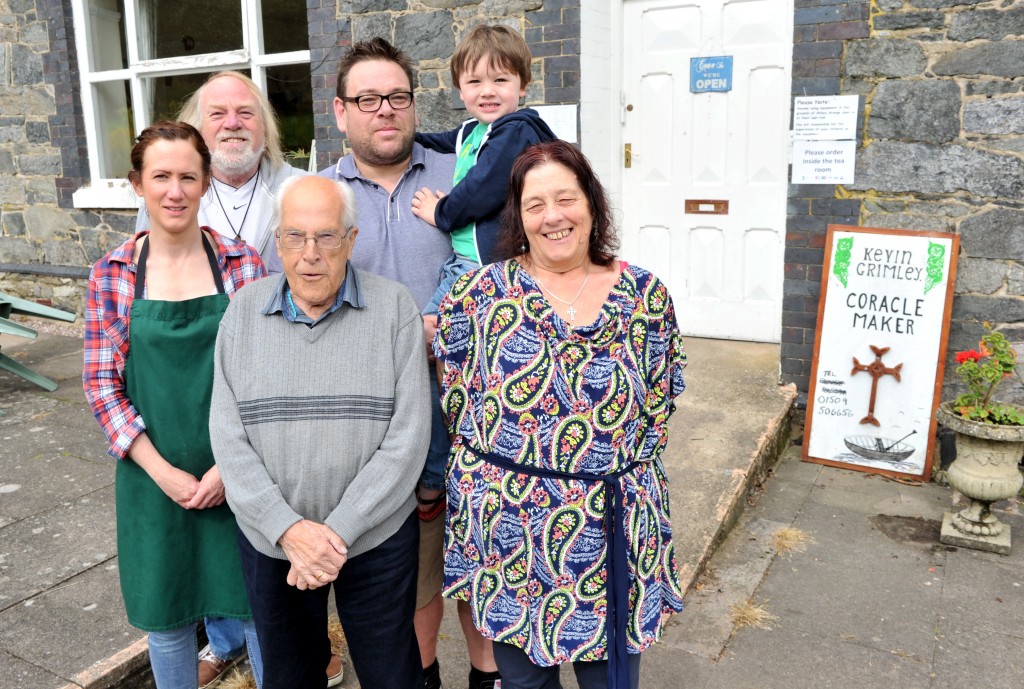 The Grimleys at their excellent tearoom

And so the couple, and their son and daughter in law, pulled together.

They went to a charity shop with a £10 note and bought as many teacups as they could.

“It [business] went beserk and I,” smiles Ellen, “got all the people I wanted to talk to.”

St Joseph’s Tearoom is a warren of rooms and gingham table cloths and has a craft shop where local artists sell their work. The menu is incredible.

On Friday they serve Italian dishes and in the evening run Bonino’s Supper Club, a feast of  northern Italian cooking.

And now Kevin and Ellen’s son Nathan and wife Natalie are onboard. Nathan runs the Mercian Centre which holds conferencing, accommodation and runs Monos courses for people seeking spiritual nourishment.

As for the boat, you can make a coracle using many different woods, explains Kevin.

The Ironbridge coracle’s frame is made of ash strips that have been woven together. The seat is made of pine and the front of the seat marks the centre of the boat, which is 4ft in length. The base of the boat is made from cotton and coated in bitumen.

“The ash is local, from Swannington,” he says, “the calico, which is a medium cotton, comes from a mill in Manchester.

“You paddle a coracle with a single oar in a figure of eight pattern. Like a skulling motion.

“It sits on the water, with it being fabric it hugs the water. The art is to getting in and getting out. If you step into it it will just go out from under you.”

Instead, you get parallel and use a sliding motion.

“Go on, have a go, it’s safe,” Kevin will encourage. “Then when they do get into it they can’t get out.”

Kevin holds two day workshops so people can make their own. He holds workshops all over the county and across the country.

“It takes three days, but the last day is waiting for the bitumen to dry. It’s better for people to do that themselves at home.

“I just like teaching people,” he adds, “I just want them to experience what I’ve experienced.” 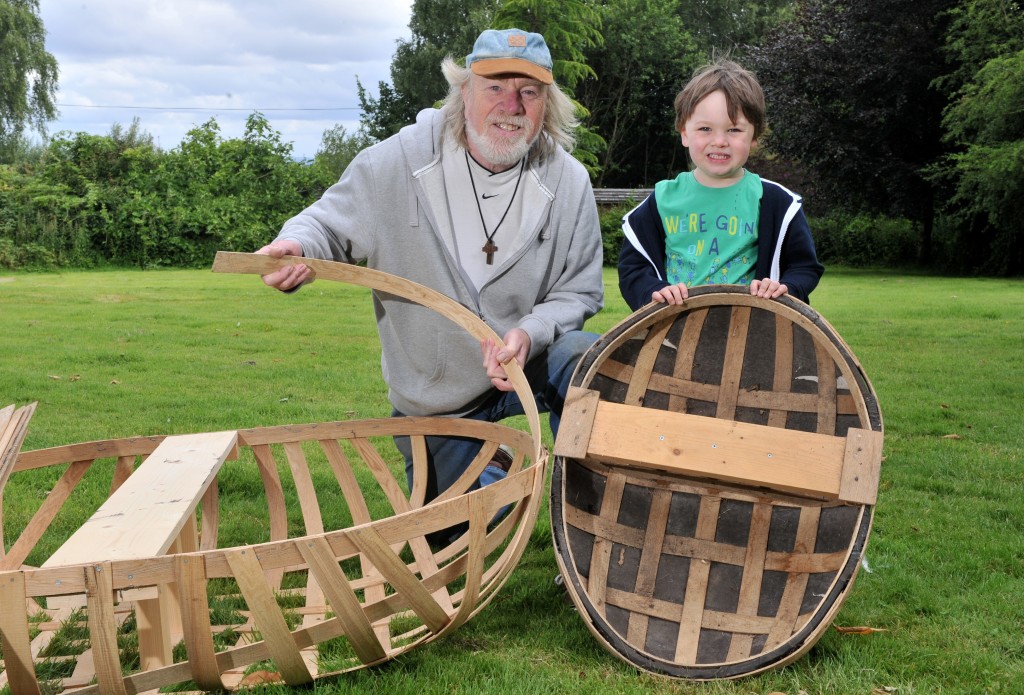 Kevin and his grandson Tom, 4, with his own mini coracle