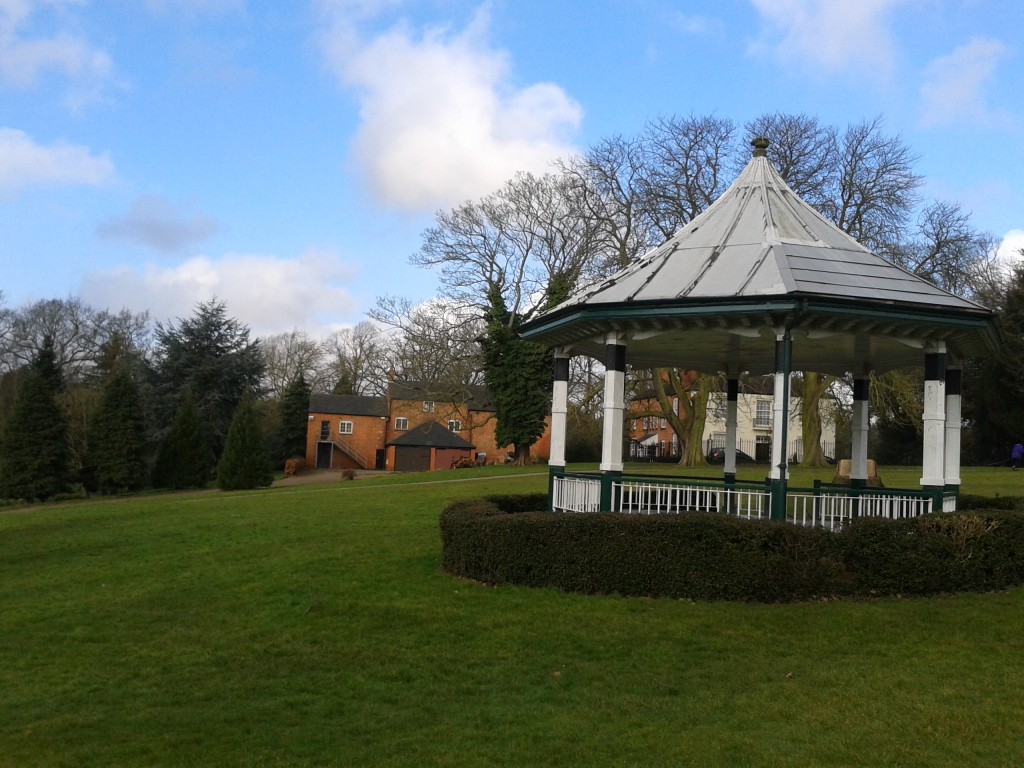 You may recognise this image from the blog’s artwork. It’s the bandstand in Western Park. This piccie was taken this morning and the incremental creep of spring is all around.

“It was one of those March days when the sun shines hot and the wind blows cold: when it is summer in the light, and winter in the shade.” 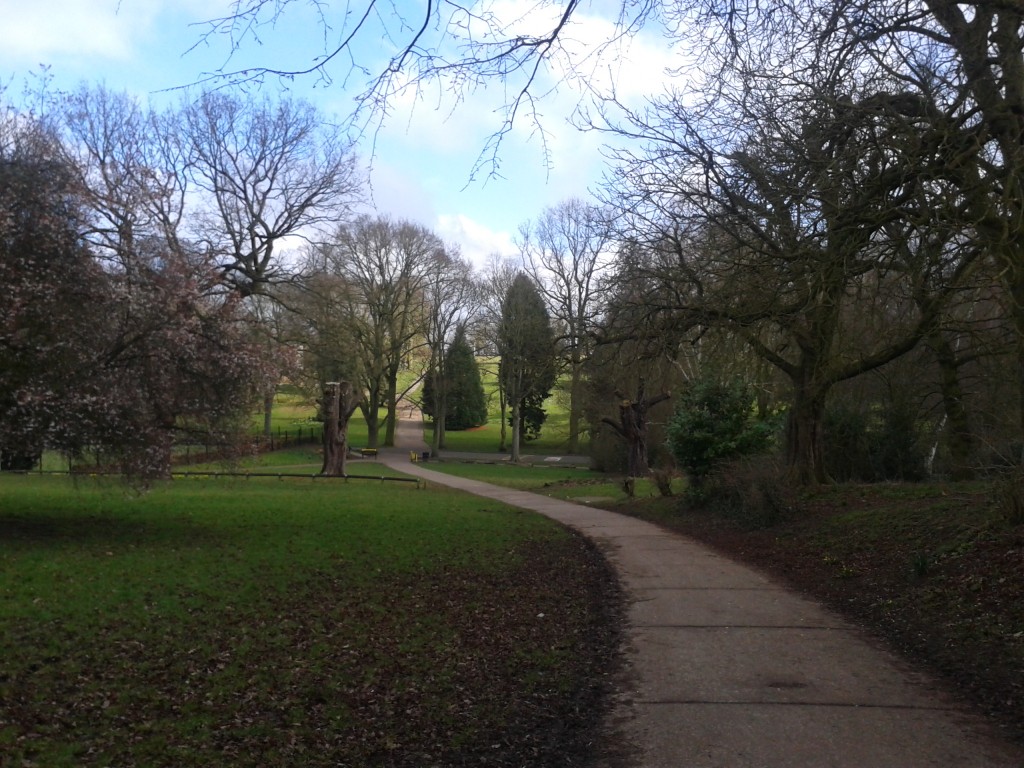 Huge cherry blossom on the left is just getting into its stride. 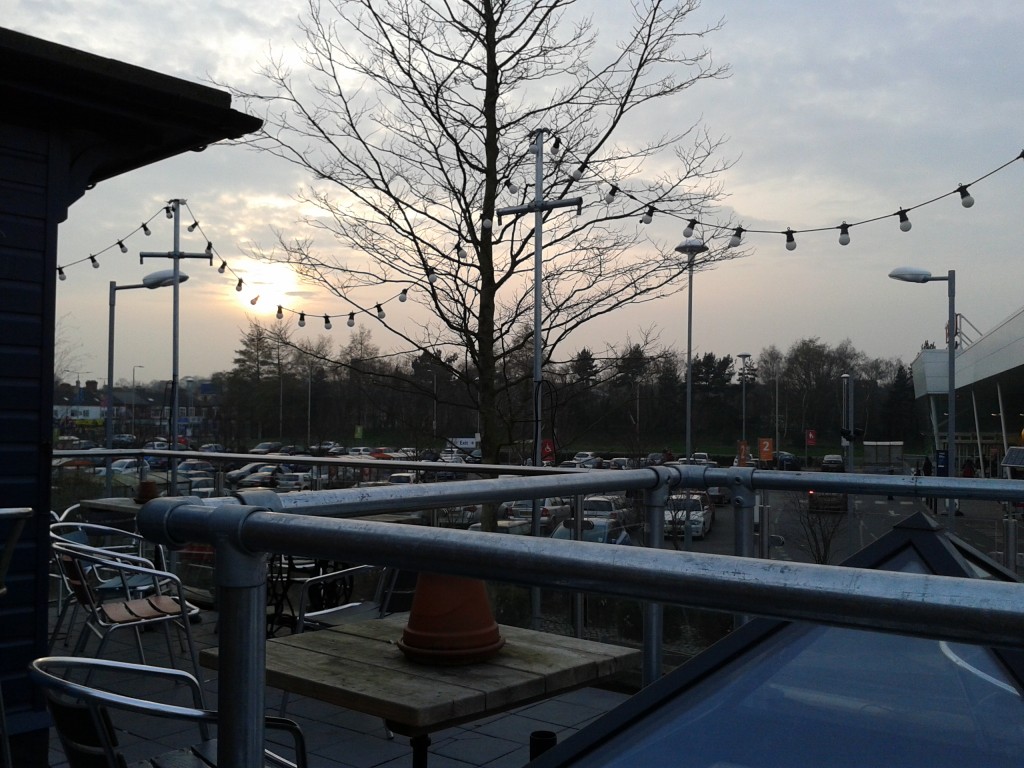 This is the view from the roof terrace at The Black Horse in Braunstone Gate, Leicester. It was taken on Saturday evening, just as I was heading into town for a friend’s 40th birthday. They’d been to see a rather uninspired production of Breakfast at Tiffany’s at Curve with Pixie Lott. Not and never. 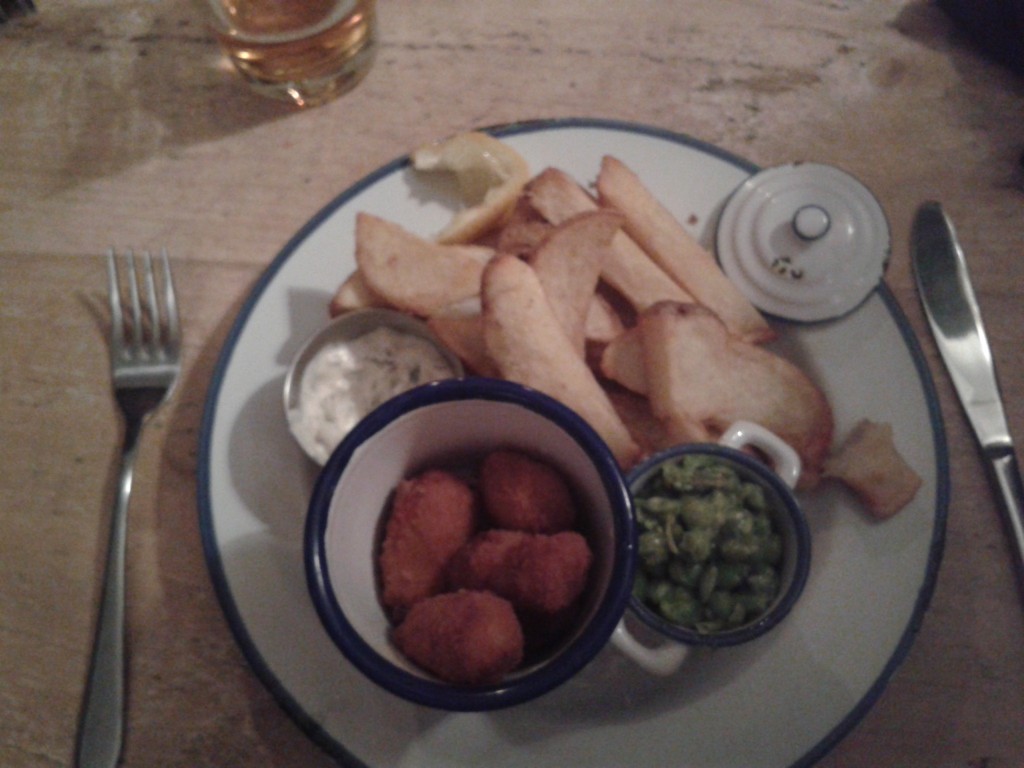 Next visit was The Queen of Bradgate in High Street. Where it was good to see Emma and British Military Fitness chums… and, of course, this plate of scampi and chips. Random enough? Hope so. While here I also bumped into a former colleague who I thought had gone back to America (She’s American). She had and then she returned. This lady is possibly the most beautiful human in the world. Some of her family is from China and some of her family is from Germany – her German grandmother used to runway model in the 1960s for all the big fashion names. Anyhoo. She told me how recently another of our old colleagues karate threw another across a desk [knocking into another colleague] and still has their job. Which makes me think, “What would you have to do to lose your job, in this situation?” The other colleague was injured and has reported it to the police. However, I do recall another member of the department being caught drink driving a good number of years ago. They lost their license. They also received a prison sentence. And they still managed to retire quite happily. Which is almost worth a round of applause. 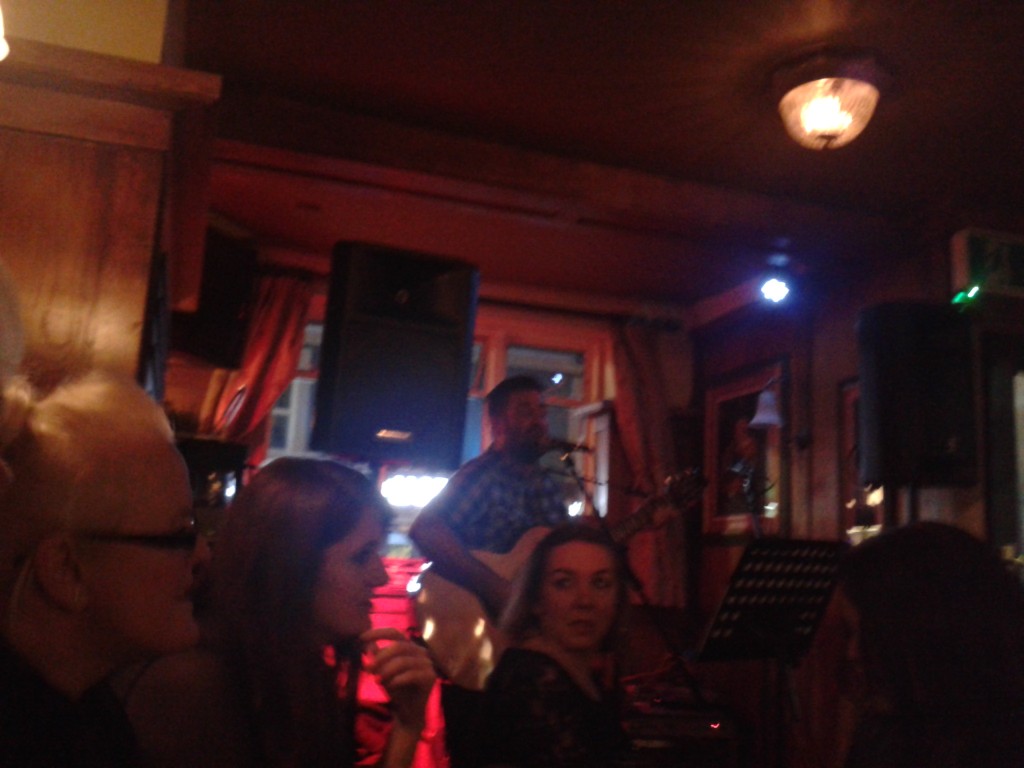 Now several beers in to the evening and having watched the end of the England V Wales rugby at The Queen of Bradgate, via The Orange Tree, we’re back at the Black Horse. Where this chap and others had been carousing us with country music. Not as bad as it sounds. Honest. By this stage I’d discovered that Everards’ Two Tribes is actually a very decent beer. Happy days. 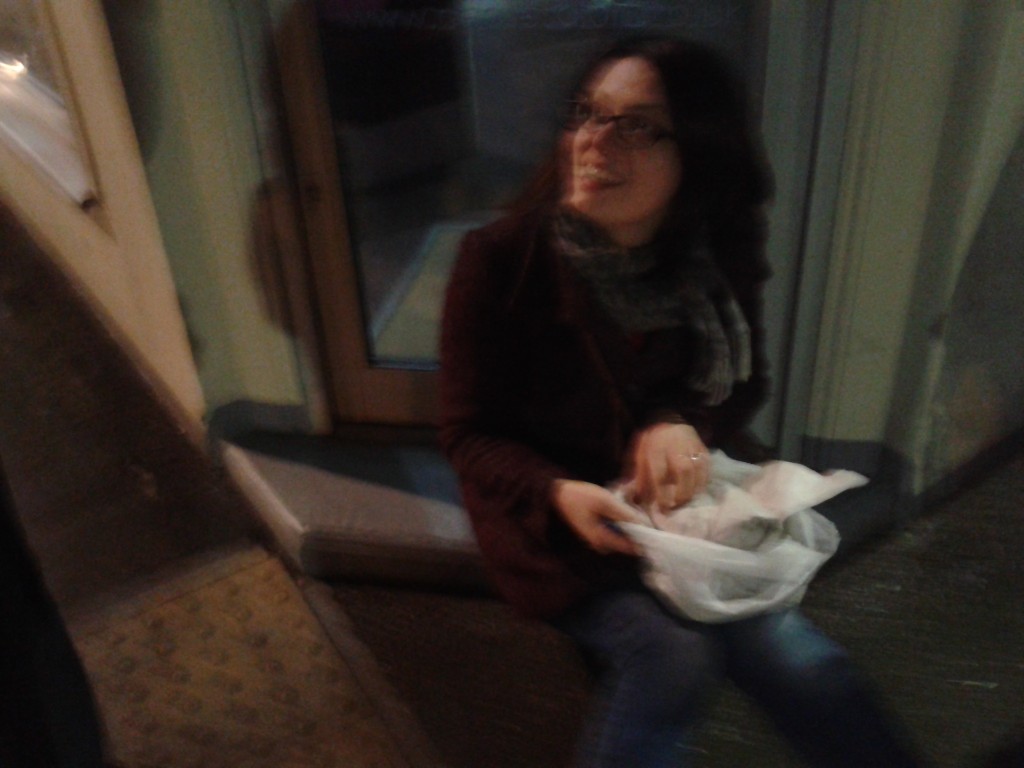 This is my friend experiencing that carb hunger one gets after an evening of over refreshment. The chips from Mario’s were spot on. And then on the walk home we met some young Lithuanian men – such is the nature of the West End at the moment. And shared a few happy words in Russian. 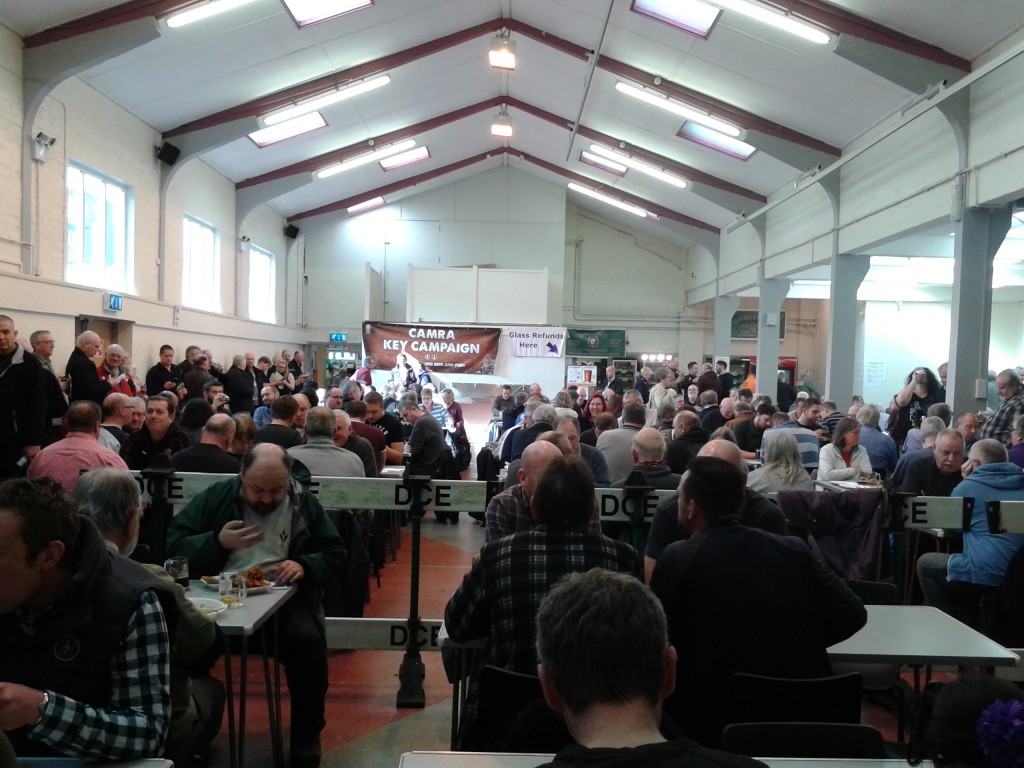 This is the dining hall during the Friday lunchtime at Leicester Beer Festival, which took place last week. It’s remarkable just how well a pint of citra goes with a Stilton cob. There was also a noteworthy sign up behind the cob stall which I asked my chum to take a picture of – I’ll post it as soon as she sends it. On the first viewing it made me laugh, and then, afterwards, it just sounded League of Gentlemen creepy: Local Food For Local People. Which, of course, it was. However, as much as I love food from the island, I’m still counting down to when we have enough Korean people to open a restaurant. 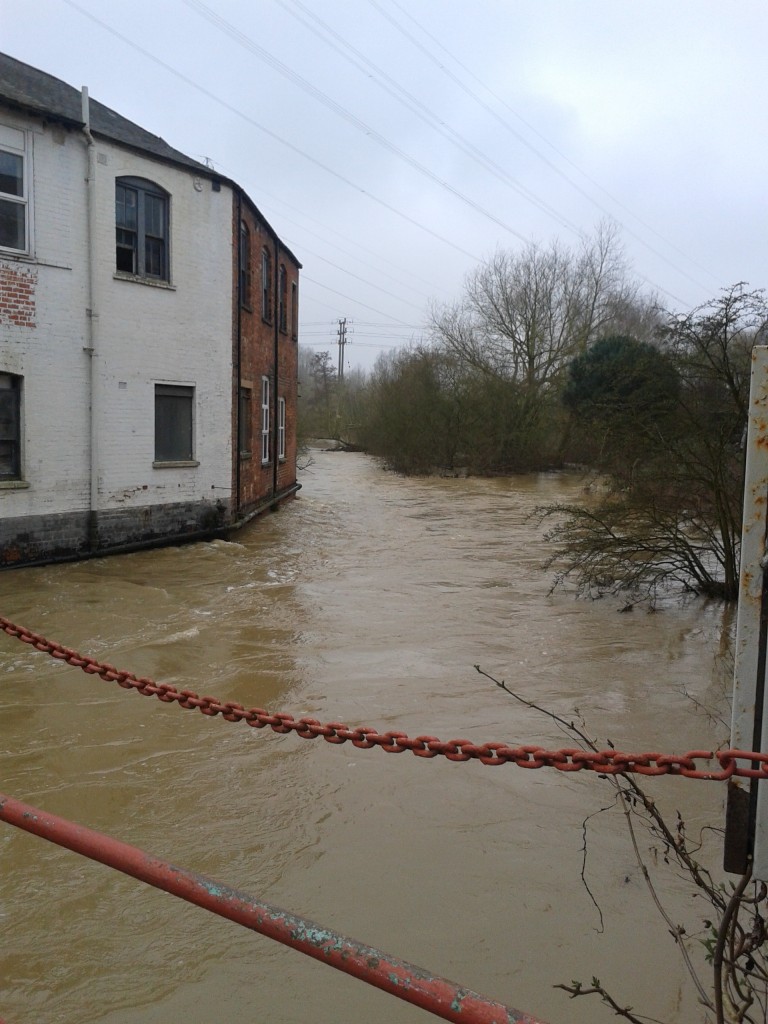 This is the Soar looking muddy as it sweeps past St Mary’s Mills/ Faircharm Industrial Estate. There’s plenty of squelch in the fields and gardens right now.