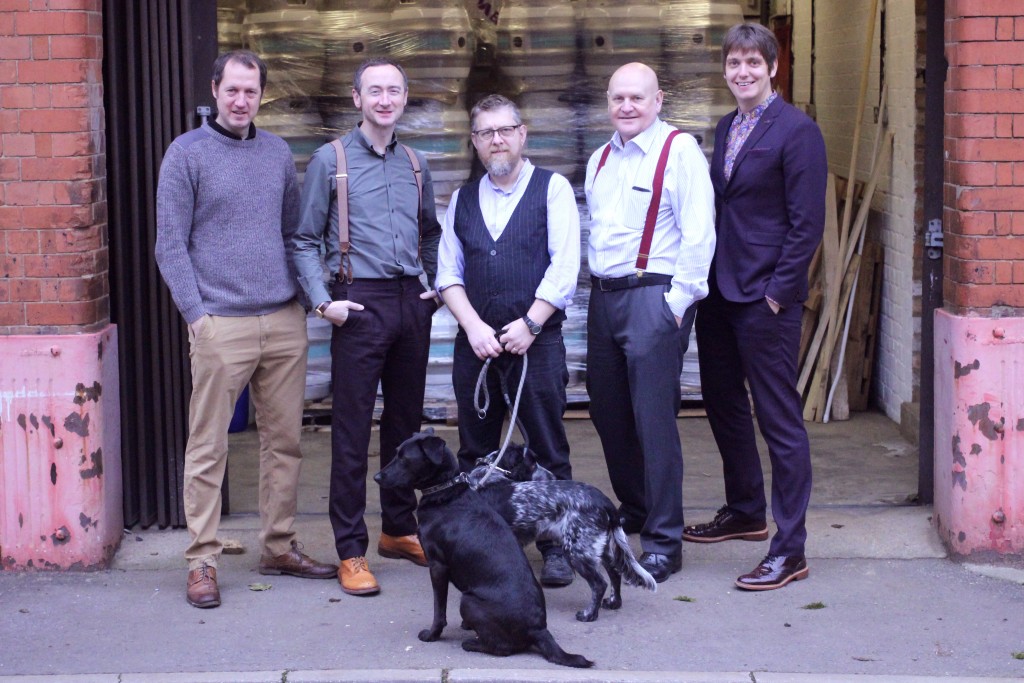 Beer brothers: the five directors of Framework Brewery. And the dogs? Admin.

Framework Brewery is a name you’re going to be hearing good things from in 2017.

Leicester city centre’s first craft brewery started taking shape in the summer and their first brew, a hoppy American Pale Ale, only sloshed into a pint glass as recently as December 6. Since then, amid their plans for an ever-changing stable of hop-forward beers, there’s been American Amber, Centennial Rye and Simcoe Stout.

Leicester pubs The Blue Boar, The Criterion, Broood@ Vin Quatre, West End Brewery, The Exchange and The Charlotte are stocking their brews, so too the Prince of Wales in Hinckley and the Needle and Pin in Loughborough.

Feedback from the pubs and their customers has been “very, very positive and encouraging” says Jonathan Briggs, Framework’s sales and marketing director.

The brewery, in Friday Street, takes its name from the city and county’s renowned textile trade – a deferential nod to the area’s bygone framework knitters. The theme continues with each brew being anointed a pattern number.

The foundation of the brewery began, unsurprisingly, through a shared love of beer.

Jonathan met Andrew Goodliffe, now Framework’s head brewer, when the pair worked for the probation service in the city.

“He worked in Cobden Street and he used to come over to Nelson Street once a week, where I worked, and he mentioned that he was going to start home brewing,” says Jonathan.

“I had done some unsuccessful home brewing when me and Linda, my wife, lived in Barclay Street. I’d had the bottles in the kitchen, cooked a roast, the heat reactivated the yeast, and the bottles on the shelves exploded.”

Linda had given her husband a book on home brewing, at this setback, he presented it to Andrew.

“One thing led to another…he told me he was a member of Camra, and then we got talking about beer every time we met up, about the Camra beer festival, and then I and a few others started the Western Park Beer Festival. Andy talked about how he’d like to do a homebrew for it.”

At this stage Andrew had been home brewing for seven years and had completed a Brewlab course. 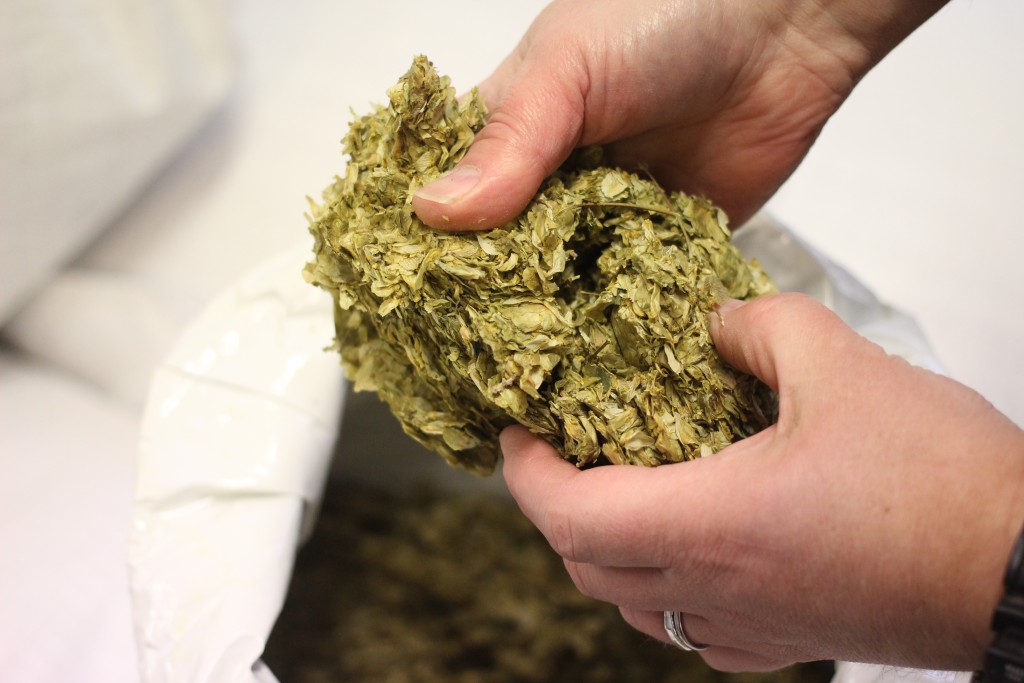 Yes, hops are from the same family as cannabis apparently.

In June, the two of them met up with Mat Mabe, then chairman of Western Park Beer Festival. Mat brought in Jim Willis, who with Mat co-owns the city’s Bulb Studios. They’re the ones responsible for designing Framework’s logo and labelling. Mat and Jim then involved their financial director Mick Willis and everything was in place.

When Andrew took voluntary redundancy in July the way was clear.

Andrew, a voracious brewer, has barely paused since.

“At the moment I’m making beers that have been popular with friends and family that have tried my home brews,” he says, “and we’re using American and New World hops.

“I’ve just done a dark bitter, a stout, a porter this week, they will still be hopped-forward with very aromatic hops, when they’re not traditionally hopped that way.

In the past, when Andrew’s been walking his dogs in Aylestone Meadows, he’s picked blackberries and added them to his brews.

The beauty of having small 1,000 litre fermenters, he adds, is they encourage risk with recipes.

One thing Andrew is keen to do is share the brewing knowledge that’s been passed to him.

“I’ve come through the home brewing route,” he explains. “As part of it I approached a lot of breweries, to work for a day. I would welcome other home brewers and if they’d like to see the process on a large scale, or to have a look at the brewery, I’m happy to be contacted.”

It’s worth mentioning that three lots of redundancy pay – Andrew’s, Jonathan’s and Linda’s – have gone into Framework’s liquid assets, that’s how confident they are of their product.

“It was an exercise in civic pride,” he says, “rather than a conscious business decision.

“Apart from the obvious love of beer, Framework was born because a city the size of Leicester doesn’t have a brewery in the city centre.

“It’s such an exciting time for Leicester and there are so many new people, businesses, and tourists coming to the city.” 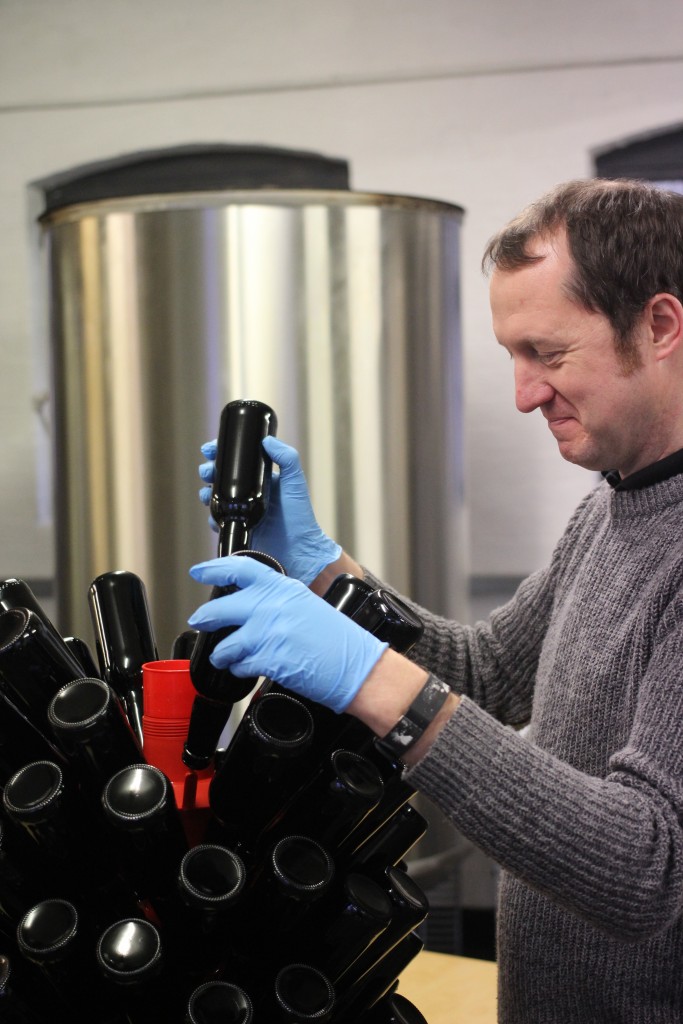 JB and his take on a Christmas tree.

During the interview Jonathan gets a message from the owner of the Needle and Pin in Loughborough. He’s had a glug of their maiden beer and, suitably impressed, is putting in an order.

Framework’s beer, says director Mat Mabe, is as nature intended – it doesn’t use finings so it has haze (It looks cloudy). They wanted their beer to be enjoyed by carnivores, vegans and vegetarians. Removing fish bladders from beer, often known as isinglass, has already become a mini movement for real ale lovers in the United States. It’s starting to catch on over here, too. Mat, like the rest of his fellow directors, didn’t see the sense in excluding a good chunk of their potential market.

As for other breweries, the ones that Framework pay their fondest respects to, Mat lists Tiny Rebel in Newport, Magic Rock in Huddersfield and Beavertown in London. They make flavour and craft the cornerstone of their business plan. Framework aim to do the same.

As for the future, Framework are all for expanding their current operation.

“We’d like to be producing to our capacity, which is 7,000 litres a week,” says Mat, “this would mean brewing seven days a week – and we’d like to expand beyond that.

“We’re not aiming to sell the business,” he adds, “we want this to be an important Leicester beer business. And we always want to make sure our beers are a craft product that are handmade and not mass-produced.”

(The Offie in Clarendon Park has Framework on their shelves, so too Wine and Whiskey in Granby Street and Hoptimism in Loughborough).

* Images by the exceptionally handy Louise Clothier-Thomas. Thanks Lou.