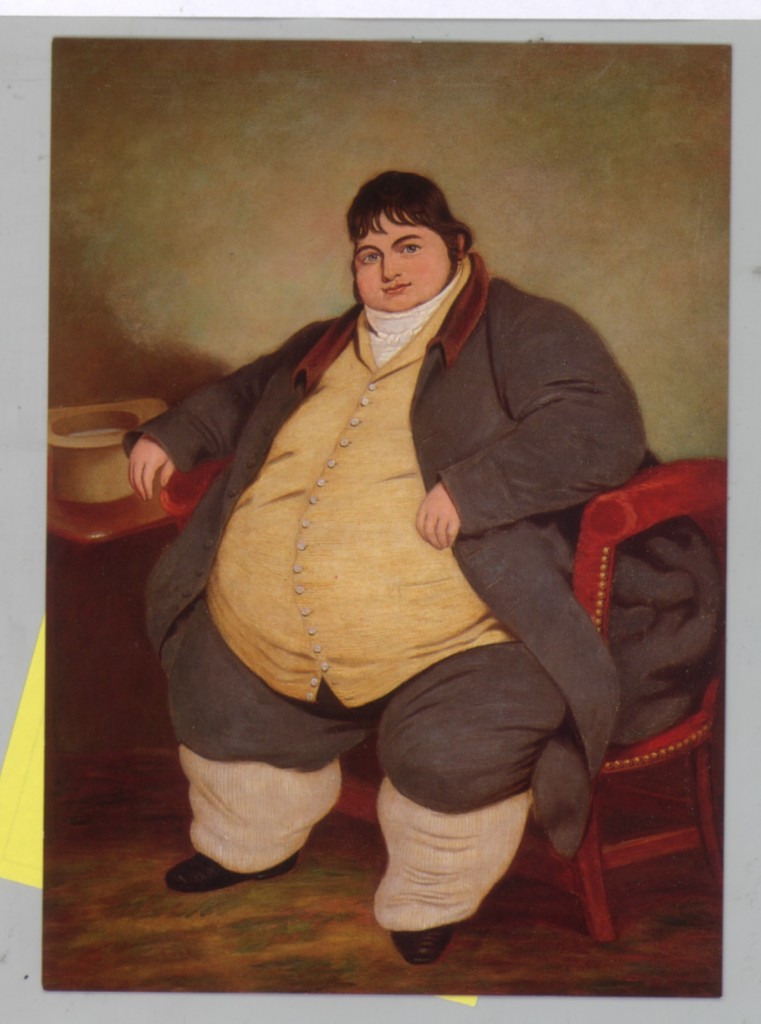 Fat doesn’t really cover it.
Nor does chubby or rotund.
Daniel Lambert was fat in
the way Mozart was a
composer. Known
throughout the British Isles for his
spectacular girth and even, believe it or
not, admired for it Dan was a horizon-blocking 52 stone 11lbs.
For generations, children and adults
in his native Leicestershire have had his
name casually slung at them as either
a) a cautionary tale, especially during
the enthusiastic consumption of a meal
or b) as an insult, when the size of
one’s waist has taken on the dimension
of a planet.
In the late 1700s, our Lambo worked
as a gaoler at Leicester’s Bridewell
prison before his size made it logistically
impossible. But if you thought he
was born big-boned you’d be wrong. In
his youth, he was intensely sporty, a
keen swimmer. Yet by the time he was
23, his waistline had run away and the
scales were buckling beneath 32
gelatinous stones. To make ends meet
he started charging people to feast their
eyes on his spectacular physique. When
a suit cost him £20, about £1,300 in
today’s money, you can understand
why. It turned out to be a canny fiscal
move and, in 1806, suitably flush of
pocket, he took up residence in
Piccadilly.
“His apartments had more the air of
a place of fashionable resort than an
exhibition,” said the Gentleman’s
Magazine, “and as long as the town
continued full he was visited by a great
deal of the best company.
“The dread he felt coming to London
lest he should be exposed to indignity
and insult from the curiosity of some of
his visitors was soon removed by the
politeness and attention which he
experienced.”
So, in June, 1809, when the 39-year-old
arrived in Stamford for the races, he
took up lodgings at the Waggon and
Horses and sent for a man from the
Stamford Mercury to place an advertisement
declaring he would be “taking
visitors” in his rooms at the inn.
Accounts from those earlier
audiences with the celebrated colossus
reveal paying punters were obliged to
remove their hats and engage in polite
and intellectual conversation. On one
occasion, King George III himself was a
visitor. Yes, that King George.
Not everyone was polite.
One sightseer moaned that as his
entrance fee was paying for Lambert’s
clothing he wanted to know its cost.
“Sir, if I knew what part of my next coat
your shilling would pay for,” Daniel
retorted, “I can assure you I would cut
out the piece.”
The freak show at the Waggon and
Horses never happened. Dan’s gargantuan
frame, as the scribe at the
Stamford Mercury remarked, “had paid
the debt of nature”. To extradite his
corpse from the inn, they knocked
down a wall and heaved his body on to
a makeshift chassis with wheels and
they used the same technique to lower
him into his grave.

First published in the Leicester Mercury under The History of Leicestershire in 100 objects. The object in question was the reproduction of Lambo’s trousers in the excellent Newarke Houses Museum in Leicester.