An art lesson at HMP Leicester 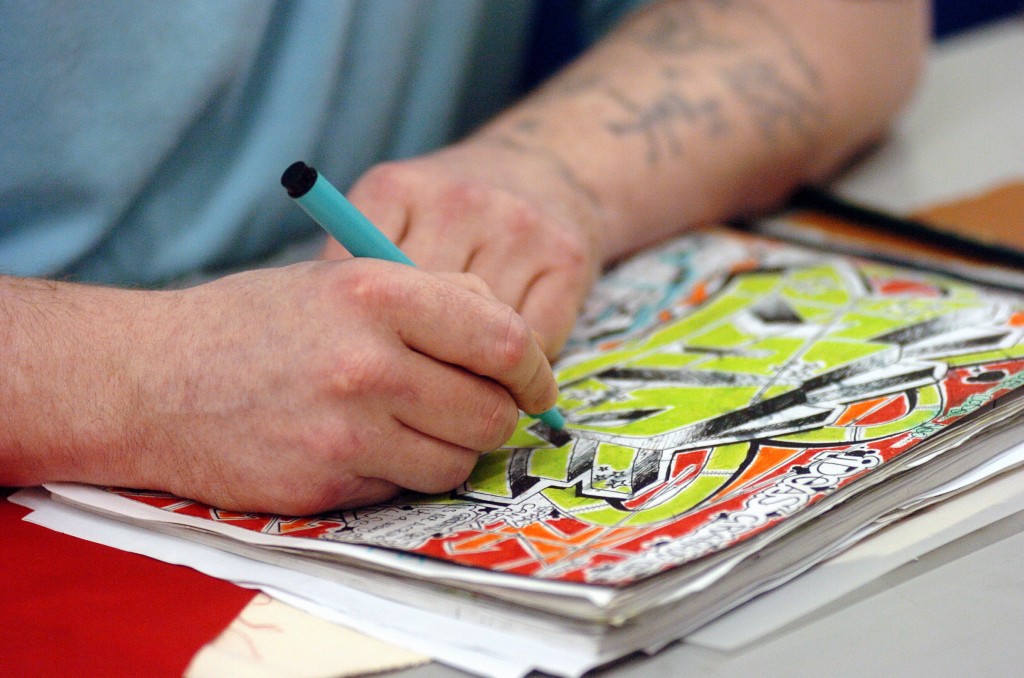 I’ve been to HMP Leicester twice. It is, on the outside, a whimsical concoction.  A romantic  dream of what a castle should look like – a portcullis, meaty turrets and arrowslits (Image at the bottom).

On the inside, it’s all corridors echoing to the clink of keys in locks.

The article below was penned in 2005. I know: it’s well old. Those were the days when the Mercury had a good relationship with the guvnor and their press person. No such thing exists now.

Anyhoo, I found this visit, my first, a pretty illuminating experience. I hope you do too.

The hook for the story was a shortlived TV programme. My then boyfriend went to university with the art teacher and she suggested coming in to see what they were up to. And so I did.

With the foppishness of an 18th century dandy, Laurence Llewellyn-Bowen has been skipping through the country’s prisons in search of artistic talent. He’s not paid HMP Leicester a visit yet, but it can’t be too long before the only human variety of King Charles spaniel sets a pointy toe inside for BBC TV programme Hidden Talent.

Beating him to it, the Leicester Mercury stole a march on old posh pants and crept in to see what’s going on behind the only portcullis in Welford Road.

And, did we find any banged- up Botticellis? Did we observe any jailbird Jackson Pollocks? Well, not quite…

Entering through a multitude of locking doors and narrow, Victorian corridors, we reach today’s class.

The five inmates squeezed in here are under the tutorship of Naomi Sisson, a Loughborough art graduate.

You probably think working in a prison sounds like a tough job, but she doesn’t think so.

“They choose to come to these classes, which definitely makes it much easier to teach.

“My group, overall, is pretty good. Occasionally, you get the odd guy who will give you grief but once you gain their respect, things are much easier.”

Dressed in grey jersey and labouring over a piece of white paper with a pencil in his right hand is an inmate on remand for wounding with intent.

In his youth, the limit of his drawing prowess was the cartoon characters on Tazos – the collectable discs which came free inside packets of Walkers crisps.

On the paper before him is the pencil-sketched drawing of a tousle-haired young woman who is seated semi-clad on an invisible floor. Her gaze is unwavering. As fledgling efforts go, it’s not bad.

“I promised my girlfriend I’d draw her,” he says, tilting his head to the left as his eyes brush over a work created from memory.

He says that he doesn’t know how long it will be until he sees his girlfriend again on the outside.

Art is often seen as a potential healing force, a view taken to heart by a 38-year-old from Chesterfield on remand for burglary.

“Alcohol makes me do silly things,” he says.

Sitting at an artist’s board, the man mountain is gliding a paint brush across a virginal page of white to see what colours complement each other.

He’s earnest and, like the rest of the men around him, his tattooed arms are works of art in themselves

“I seem to have learned a lot about myself through art,” he says, “through reading and trying out different artists’ styles and trying to understand how the artist felt.

“I like Leonardo. I see a lot of Leonardo in myself,” he says, “I’m very inquisitive.

“Michelangelo, he’s very well- known isn’t he? I like the style of the Italians, the Renaissance painters, their approach. Like Winston Churchill said, it’s in the look, innit?” 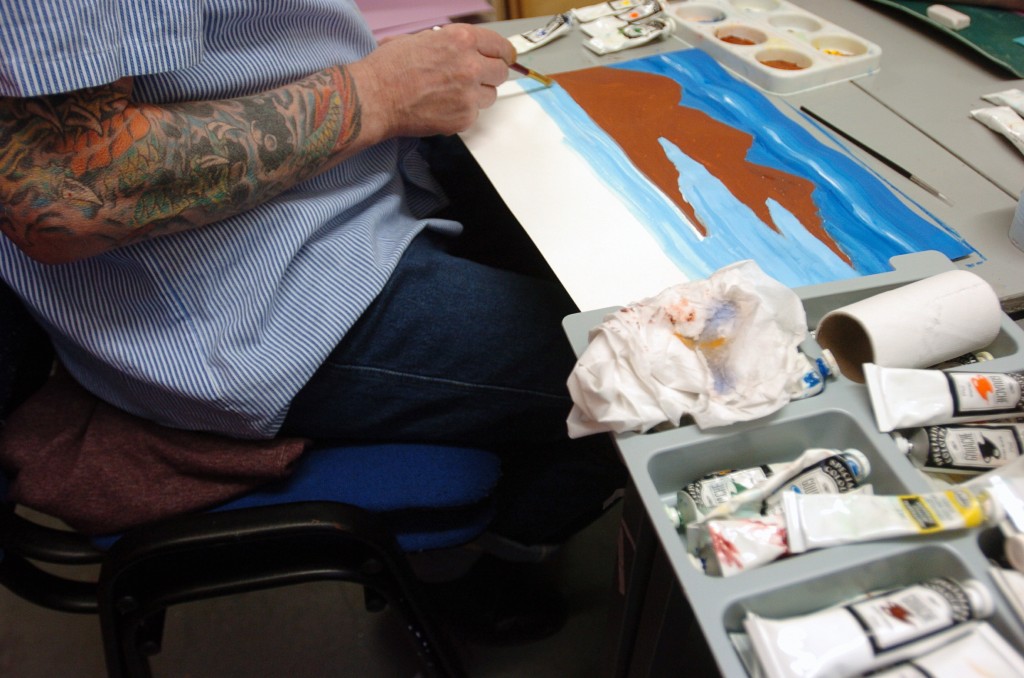 As artwork goes, his is merely practice, but it’s a welcome pastime for a man who stopped attending school when he was 12.

“I was always a bit arrogant,” he says, “up to no good, sticking pins in rubbers. Class sizes were then 30-plus, you didn’t get a lot of time with the teacher.”

Leicester prison and its art department, he says, has helped him feel better about himself and given him a focus.

“I’ve got to the point where I’ve really had enough, and it’s one of the main reasons I’ve decided to take art classes.

“You’ve got to have a passion and I’ve found something I really enjoy doing. The main reason I decided to take art classes is to see if I can focus in that direction and nowhere else. It would be a first.”

Art is just one of the options which inmates at Leicester can choose.

It’s a lifeline for the men in here today.

Cameron Hart is the cream of today’s crop, and he’s found huddled over a series of T-shirt designs and surrounded by his graffiti sketches.

He’s almost 34 and a Leicester lad who won’t be hearing the clunk-click of freedom until December 2006.

“Look at this,” he says, pushing forward his sketch book. Each page a riot of colour and text. There’s a real flow to his work and he tells me he wants to get into graphic design when he gets out.

Naturally, despite his talent, he’s concerned about his job chances. That would be a shame because his work is really good. 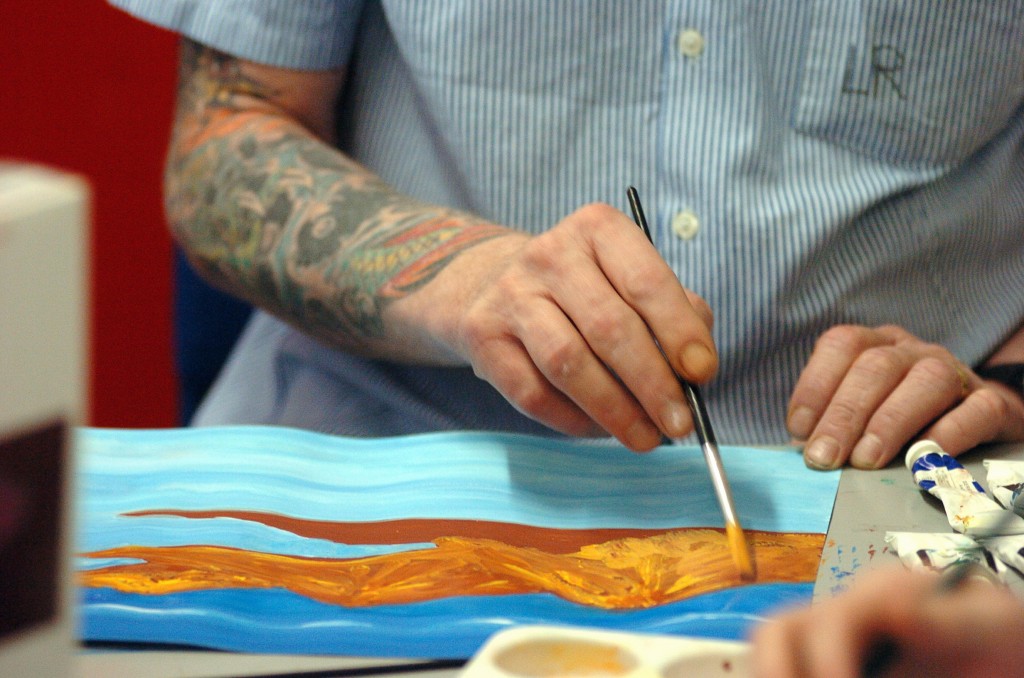 The subject of the jabbering amphibian sparks a debate.

“Forget Des O’Connor,” says one inmate. “Blast out Crazy Frog in prisons and you will get no re-offenders.”

There’s a gaggle of approving laughter.

Next in the group is a 52-year-old on remand for “removing” several thousand pounds from a building society.

His wife in South America doesn’t even know he’s in prison.

In front of him is a colourful painting of sun, coast and sea.

“It’s just something in my head,” he says. “I live in Venezuela.”

This is his first visit to prison, and it’s clear he’s better travelled than everyone else in here. He speaks Spanish fluently.

“I joined the art class because I thought it would give me a chance to express myself emotionally,” he says. “For me, it’s a growing process. I’m growing into the next stage of my life.

“It’s made me realise certain personal things about the way I am. It’s given me time to get my direction sorted out.

Talk of Van Gogh prompts Cameron to pipe up.

“I saw Van Gogh in the pub, you know. I asked him if he wanted a pint.”

The room stops abruptly to listen. 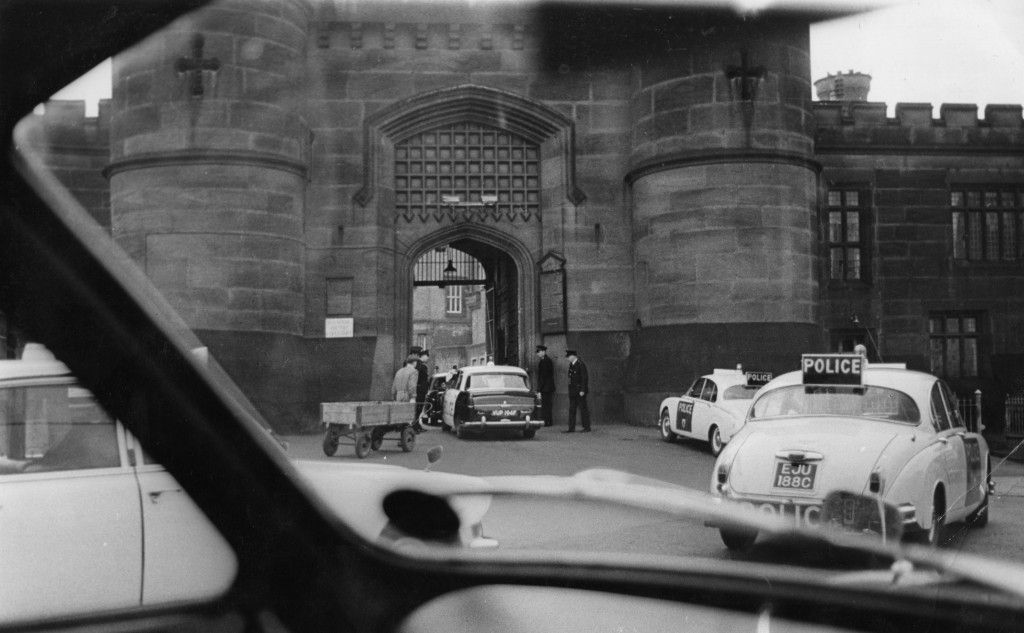