Countryside Letting it all hang out in Ratby

Letting it all hang out in Ratby 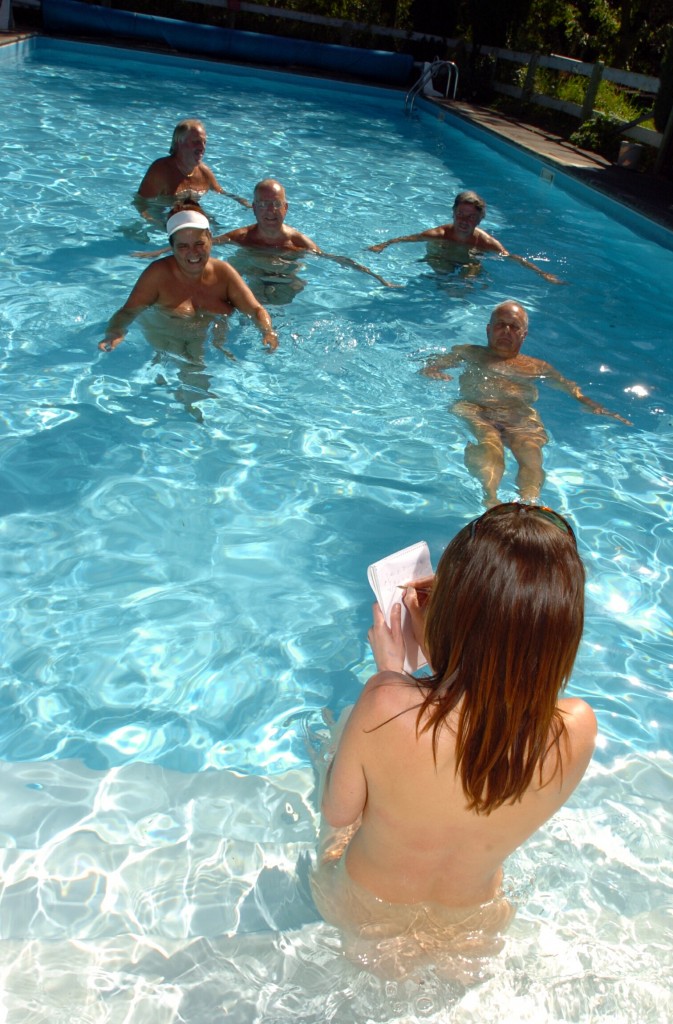 It’s a hot day at Charnwood Acres Country Club. So hot, in fact, that people aren’t wearing any clothes.

But that’s par for the course at Charnwood Acres, one of the largest naturist resorts in Britain.

At this verdant paradise in Ratby, just a 15 minute drive from Leicester city centre, nakedness is seen as an integral cog in the pursuit of physical and mental well-being.

Club members spend their days relaxing in the buff in the English outdoors, happily escaping tell-tale tan-lines which mark out those who are more inclined to textiles.

Retired Leicester General midwife Pat Beckerton, 62, has been running the private country club for 28 years with her husband Peter, who is 73, and, along with her husband, looks at naturism pragmatically.

“If God had meant us to go around naked, we would be born naked,” says Peter, a former Rolls Royce designer, seated on the clubhouse’s sunny patio. 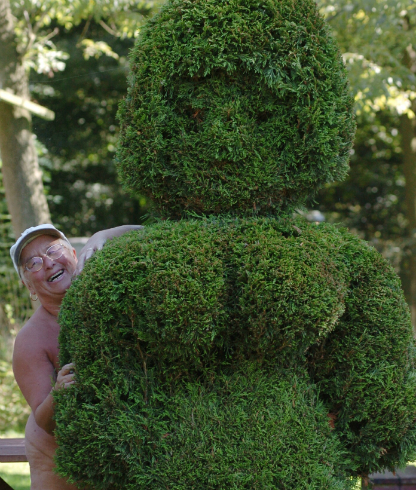 Peter’s been going native since he was 18, and stationed with the RAF in a remote outpost in Northern Ireland.

They would strip off, he says, “when the weather was nice”.

“I took it from there,” he says. Peter’s currently President of the Association of British Naturist Clubs.

Surrounded by 20 acres of woodland, the club has 70 static caravans on site and 180 members. Families pay £148 for a year, plus extra for leasing a caravan space or caravan. There’s camping too.

Once past the tall gates of the club’s scenic wooded entrance, members can make use of a heated outdoor swimming pool, a sauna, tennis courts, a large barbecue area with a Dangerous: Men Cooking sign and green space to roam and have picnics. There’s also a clubhouse which has panoramic views of the grounds.

It hosts dinners, live music and other entertainment suitable for children and adults all year-round. And with so many games – mini-ten, petanque, badminton, volley ball, shuffleboard, pool and table tennis – it’s clear the inhabitants enjoy their sport.

It’s a fact that going starkers isn’t as common or accepted in the UK as it is abroad. Spain has no less than 17 naturist federations and the Germans and the French are also more relaxed with nudity.

Yet, in the UK, most Brits remain deeply suspicious of other people wanting to get naked, and fail to see the attraction of playing fleshy hokey-cokey with our island’s jovial climate. 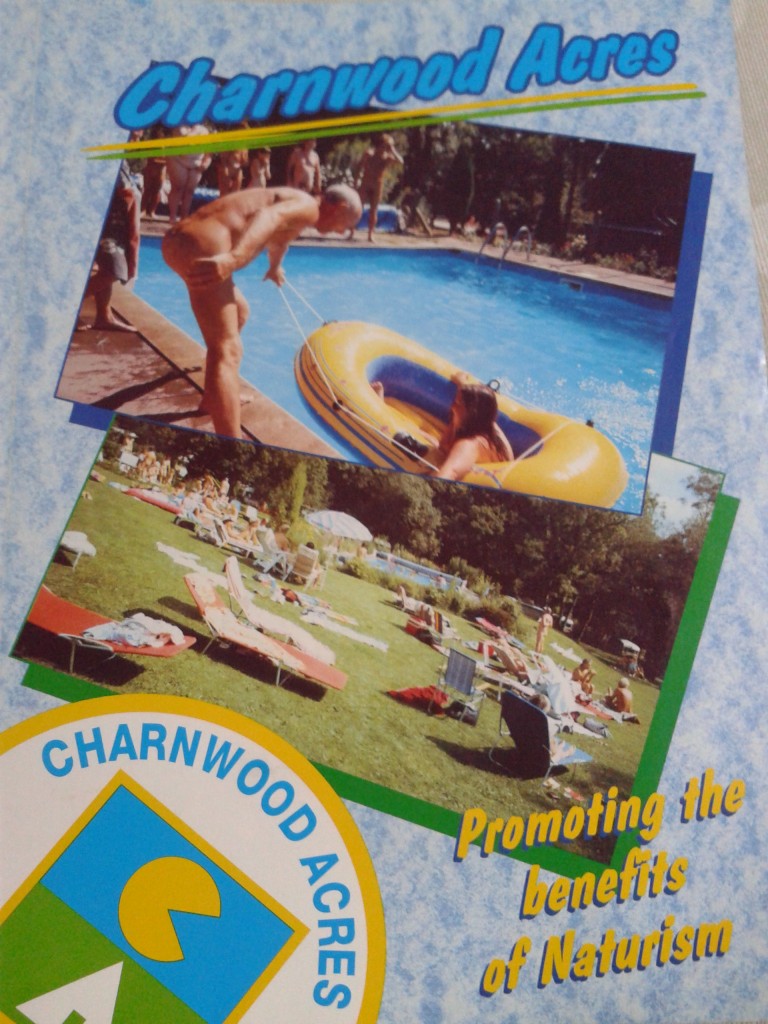 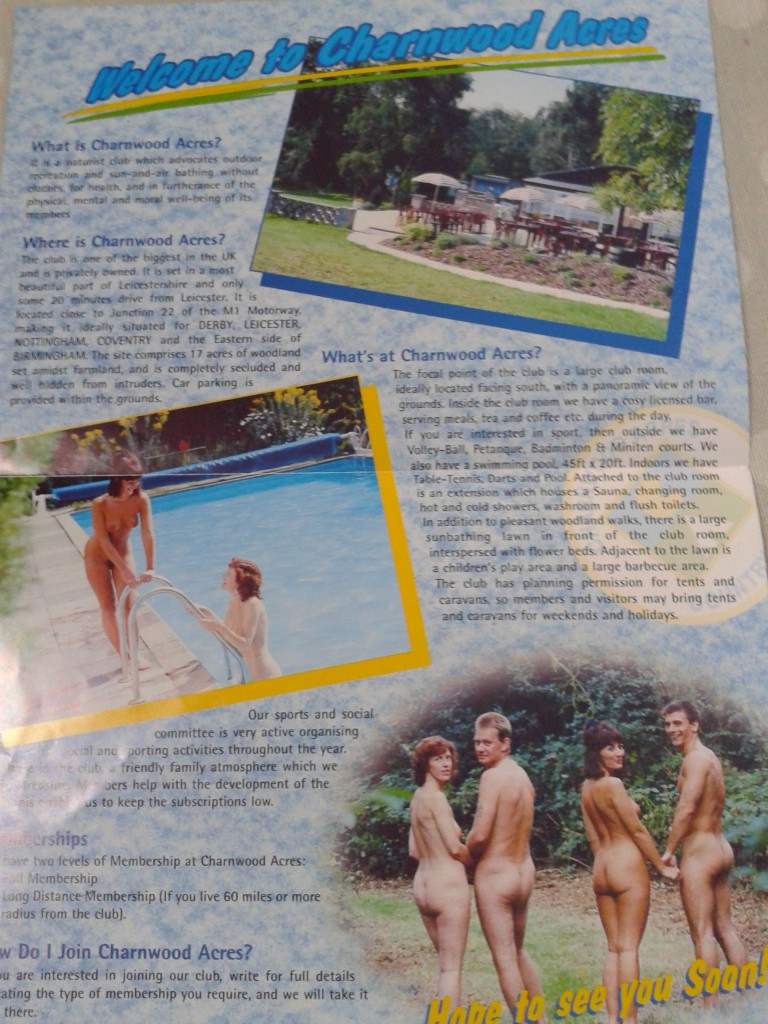 Some even suspect that male naturists are forever visually embarrassing themselves. This is not the case.

“It’s a common misconception,” says Peter. “The truth is nudity in sun clubs is not sexually stimulating.”

British Naturism has 15,000 members and an NOP survey commissioned by the organisation in 2000 found that one million British citizens consider themselves naturists. About one in every 55 people.

Despite being usually open-minded sorts, Mercury colleagues were highly sceptical.

“You just want to go and gawp at men’s bits,” they accuse. This claim is vehemently denied.

And when I explained I’d be conducting the interviews sans clothes, well, you wouldn’t catch them doing it, etc. Further, I needlessly add that not one male reporter was open minded or brave enough to do this assignment.

Nudity is normal, I have to explain, just generally not so much among strangers. In the middle of the day. Sober. 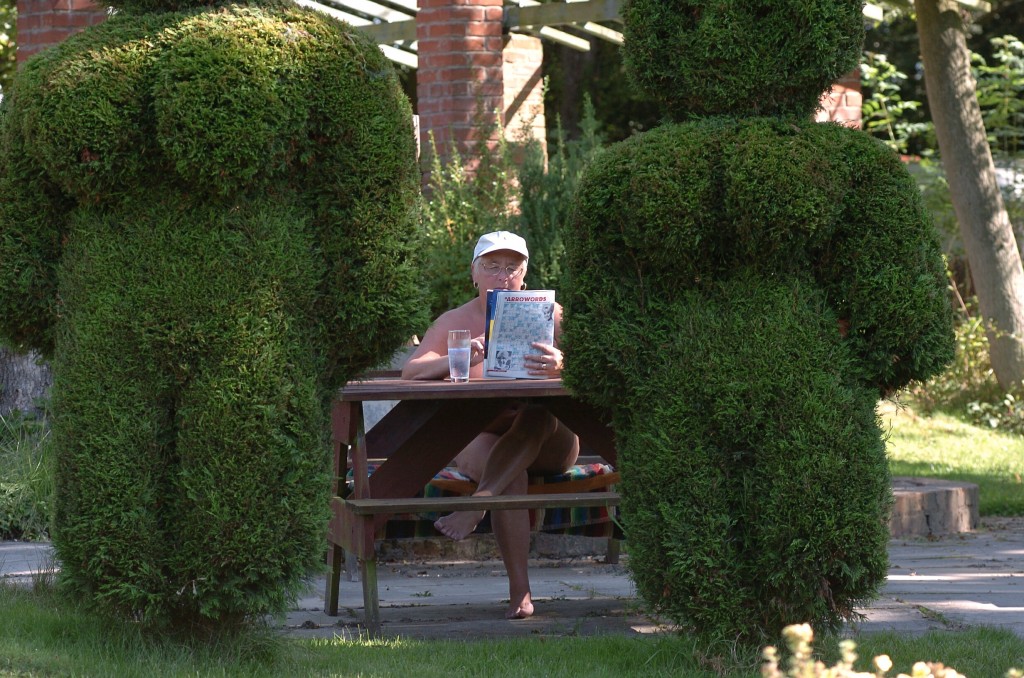 A naturist called Linda chilling out at the Charnwood Acres Country Club.

So here we go. I remove my clothes in the changing room. Now I’m ready for business, sporting only a reporter’s notebook and a pair of sandals.

Striding into the clubhouse bar, I can see a score of nude fifty-pluses sunbathing outside. I casually order a gin and tonic from the barman. I am head-to-toe commando except for a pair of Birkenstock-esque sandals bought in the M&S sales last month.

At this stage, I suppose, most people would be feeling nervous. Not me.

“Naturists come in all shapes and sizes,” says Pat, as we sit drinking on the sunny, south-facing clubhouse patio.

“There’s Ron; he’s getting on for 89 now. There’s beauty in everyone if you look for it.”

A non-naturist vicar who visited a few years back was so taken with the warmth of the club’s members and how chatty they were, he conducted the final half of a Sunday service on the lawn without his cassock, in a nude show of respect. They loved it.

Chris, 65, is a retired Rolls Royce employee and lives in Derby. He has been coming to Ratby for four years because he can take his clothes off and swim.

He loves the social aspects too. He’s very friendly and is rubbing sun cream into my shoulders within five minutes of me shedding my clothes at approximately 11.35am. His attention, I have to admit, is not exactly welcome. Would he be doing this to a chap who had just joined? Hmmm no. I hide my modesty with a handy copy of British Naturist Magazine, Autumn 2004.

“I just got fed up of having white bits,” he continues, regardless/oblivious. “I’m a cyclist, a keen gardener and I do a lot of walking. I had brown bits here, there and everywhere. So, I started putting on swimming trunks to do the gardening, and then thought I’d go the whole hog and join a naturist club.”

Watching me with my notebook, he offers this advice: “I think people work better naked. I do when I’m at my computer.”

Linda, 61, a cleaner from Coalville, is enjoying the sun with her husband Ron, 68, a former miner. They’ve been coming here 13 years.

She says self-consciousness stopped her joining for a long time. Now she wishes she’d taken the nudist plunge sooner.

“There’s nothing like it,” she smiles. “It’s a very, very nice place. The children are safe here when they come.”

Ron adds: “You get to these gates and you leave your troubles behind. It’s paradise here.” 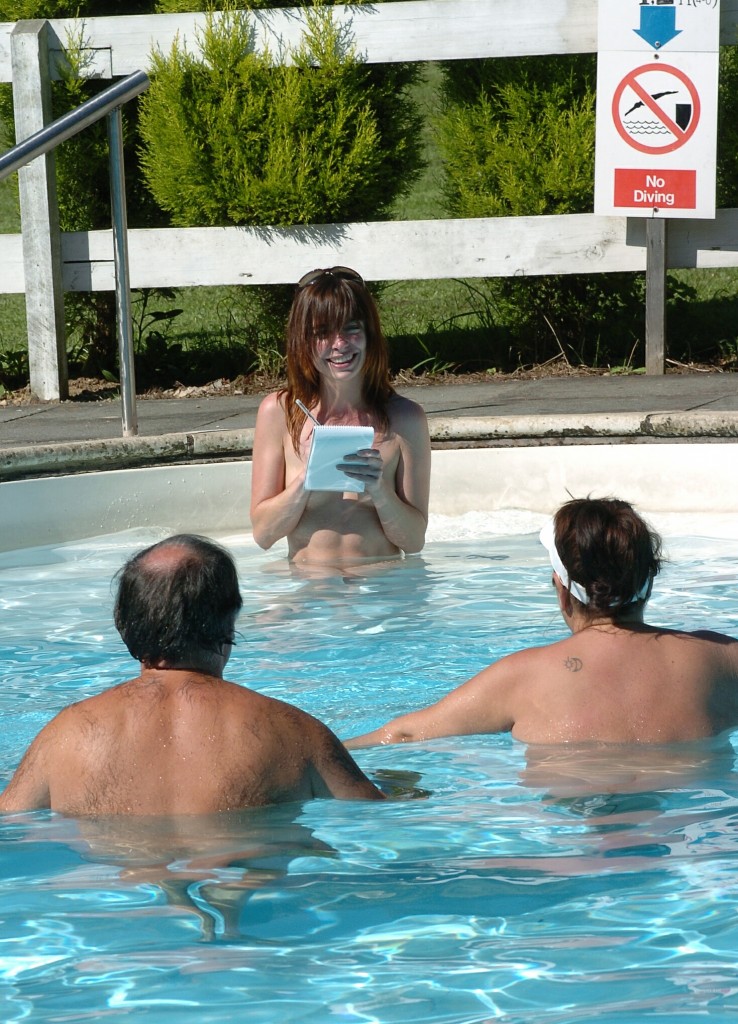 Bob, 75, comes from Southwell, in Nottingham. He’s a retired geologist and first tried naturism on a beach in Croatia 20 years ago.

“When you’ve done it once, there’s no other way of doing it. I was fed up of soggy swimwear.”

He’s been with the club 18 months, after a naturist programme on TV sparked his interest.

“And nobody here is a crank; they’re all balanced folk. There’s a pleasant ambience.’’

My clothes back on, I return to work at 4pm; feeling de-stressed and chuffed to bits that I got to swim, drink G&T and sunbathe outdoors on a hot, September day. And, here’s the kicker, I got paid for doing it.

I’m besieged back at the office as news of the visit has spread.

“You’re not telling me no one got excited with naked women walking around?” I’m asked, more than once.

“No,” I assure them, “there’s nothing sexy about it.” It’s about as sexy as the communal changing room in a public swimming baths.

However, I’m not believed and, as such, rethink my belief in the open-mindedness of my colleagues. The weirdos.

A version of this article was previously published in The Leicester Mercury.